The Trudeau government is taking a second look at plans to sell 16 Canadian-made helicopters to the Philippine military as concerns continue to mount about how the aircraft will be used.

'At the time, the understanding suggested that these helicopters were for search-and-rescue operations'

The Trudeau government is taking a second look at plans to sell 16 Canadian-made helicopters to the Philippine military as concerns continue to mount about how the aircraft will be used.

The government initially defended the $300-million deal, which is being facilitated by the Canadian Commercial Corp., saying the Montreal-built Bell helicopters would be used for search-and-rescue missions and disaster relief.

But International Trade Minister Francois-Philippe Champagne announced Wednesday that he had ordered a review after a senior member of the Philippine military said the aircraft would also be used in "internal security operations."

Human-rights and arms-control groups have accused the armed forces in the Philippines of extrajudicial killings, torture and other atrocities while fighting Islamic militants in the south of the country, and communist rebels in other areas.

Champagne said the deal, which was quietly finalized in December, was conducted through a memorandum of understanding between Canada and the Philippines signed by the previous Conservative government in 2012.

"At the time, the understanding suggested that these helicopters were for search-and-rescue operations," he said during a hastily called news conference outside the House of Commons.

"The moment that I saw a statement by a senior military official in the Philippines which indicated otherwise, I immediately asked the Canadian Commercial Corp. for a review." 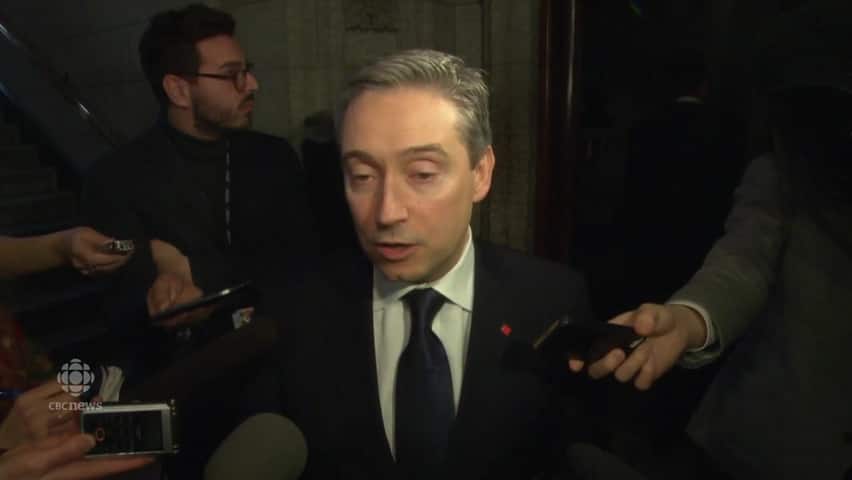 Champagne added that neither he nor any other ministers were asked to authorize the contract.

The company has so far remained tight-lipped about the deal, including whether it conducted any human-rights assessments before completing the contract.

But it's not the first time the Crown corporation, whose role includes selling military goods to other countries on behalf of the government, has facilitated the sale of arms to a country with a questionable human-rights record.

Most notably, the company was at the centre of the multibillion-dollar deal involving the sale of light-armoured vehicles to Saudi Arabia, which was finalized by the Harper government and since supported by the Liberals.

Amnesty International Canada called on the government Wednesday to reveal whether a human-rights assessment was conducted for the Philippines deal, and what safeguards are in place to ensure the helicopters are used properly.

"There should also be measures in place to mitigate risks, including strict end-user certificate conditions and post-delivery checks to ensure the equipment is being used for the agreed purpose and in line with international law," said Amnesty Canada secretary general Alex Neve.

The International Coalition for Human Rights in the Philippines wrote to Foreign Affairs Minister Chrystia Freeland last year asking whether those helicopters had been used to commit human-right abuses. It did not receive a reply.