Prime Minister Justin Trudeau delivered a foreign policy speech in Montreal today that had a noticeable domestic flavour, railing against the Conservatives and accusing them of flirting with "the forces of populism."

'They envision a world where Canada flirts with the forces of populism,' says PM of Tories

Prime Minister Justin Trudeau delivered a foreign policy speech in Montreal today that had a noticeable domestic flavour, railing against the Conservatives and accusing them of flirting with "the forces of populism."

"The Conservatives envision a world where Canada hectors from the sidelines — where we refuse to participate, but still expect a platform from which to shout," Trudeau told a gathering of the Montreal Council on Foreign Relations earlier today.

"They envision a world where Canada flirts with the forces of populism, whipping up fear and spreading misinformation."

In a campaign-style speech, the prime minister patted his government on the back for standing up against the rise of populism on the world stage.

"We know that a strong and thriving middle class is the most effective bulwark against destructive populism," Trudeau said. "That is the Canada that this turbulent world needs us to be."

Trudeau and his government have faced their own problems on the world stage, including the prime minister's much-criticized trip to India, strained relations with Saudi Arabia over its human rights record and an ongoing war of words with China over the detention of two Canadians in apparent retaliation for Canada's arrest of Huawei executive Meng Wanzhou.

But his 45-minute speech Wednesday was laced with digs at the Conservative Party and its former leader, Stephen Harper.

"This much is clear: (the Conservatives') approach to foreign policy will leave Canada diminished on the world stage. It will be a return to the Harper era, where Canada does less and matters less," Trudeau said.

In another attempt to contrast himself against his main competition this fall, Trudeau focused a portion of his speech on climate change, arguing it will be a key diplomatic issue between countries.

"Climate change is an existential threat. The Conservative Party doesn't seem to understand that," he said.

"This wilful blindness to the threat of climate change contributed to the decline of Canada's stature and influence worldwide."

In a statement, a spokesperson for Conservative Leader Andrew Scheer said he'd be happy to debate the prime minister at the upcoming Munk Debate on foreign affairs if Trudeau accepts the invitation.

"Justin Trudeau promised that Canada would be 'back,' but in reality under his failed leadership, Canada is more isolated than ever before on the world stage," said Simon Jefferies.

"A Conservative government led by Andrew Scheer will redefine our international alliances and partnerships based on the rapidly changing world order, clearly and honestly identify the threats Canadians face, and renew Canadian sovereignty with a reinvigorated national defence."

The remainder of Trudeau's speech was a reflection on his government's record so far, including the new North American trade deal negotiations, increases in defence spending and a commitment to helping women and girls around the world.

Trudeau also vowed to stand up to China in a climate of increased tensions between the two countries.

He told the Montreal crowd the government is working to obtain the release of businessman Michael Spavor and Michael Kovrig, a former diplomat on leave, who were detained in China late last year after Canadian officials arrested Chinese telecom executive Meng Wanzhou at the Vancouver airport to face possible extradition to the United States.

"We do not escalate, but we also don't back down," he said. 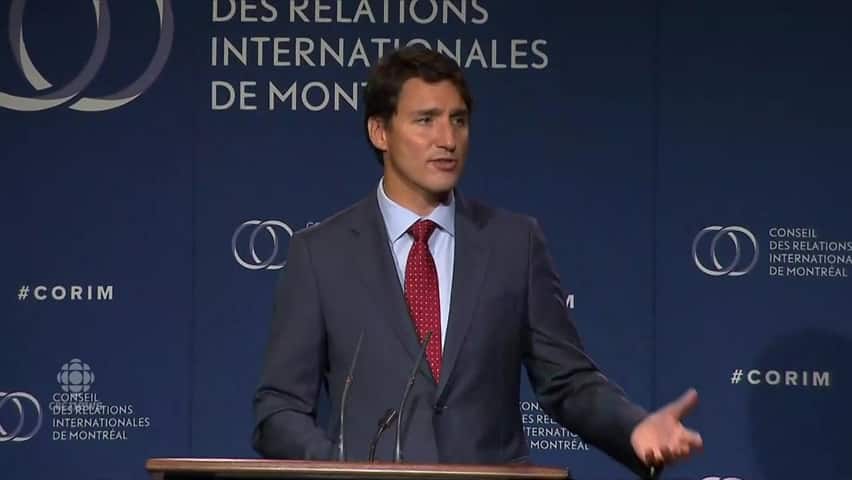