All businesses seeing 30% drop in revenue due to pandemic will be eligible for 75% wage subsidies: Trudeau

Businesses and non-profit organizations seeing a drop of at least 30 per cent in revenue due to COVID-19 will qualify for the government's 75 per cent wage subsidy program, Prime Minister Justin Trudeau announced today.

PM warns of 'serious consequences' for companies that abuse the system

Businesses and non-profit organizations seeing a drop of at least 30 per cent in revenue due to COVID-19 will qualify for the government's 75 per cent wage subsidy program, Prime Minister Justin Trudeau announced today — adding that "serious consequences" await those who abuse the system.

During the daily media briefing outside his residence at Rideau Cottage, Trudeau said the number of people a business employs will not determine its eligibility. Charities and companies big and small will qualify, he said.

For those companies experiencing a decrease in revenues of at least 30 per cent, the government will cover up to 75 per cent of a salary on the first $58,700, which could mean payments of up to $847 a week. The prime minister also encouraged businesses to top up their employees wages with the remaining 25 per cent of their salaries. 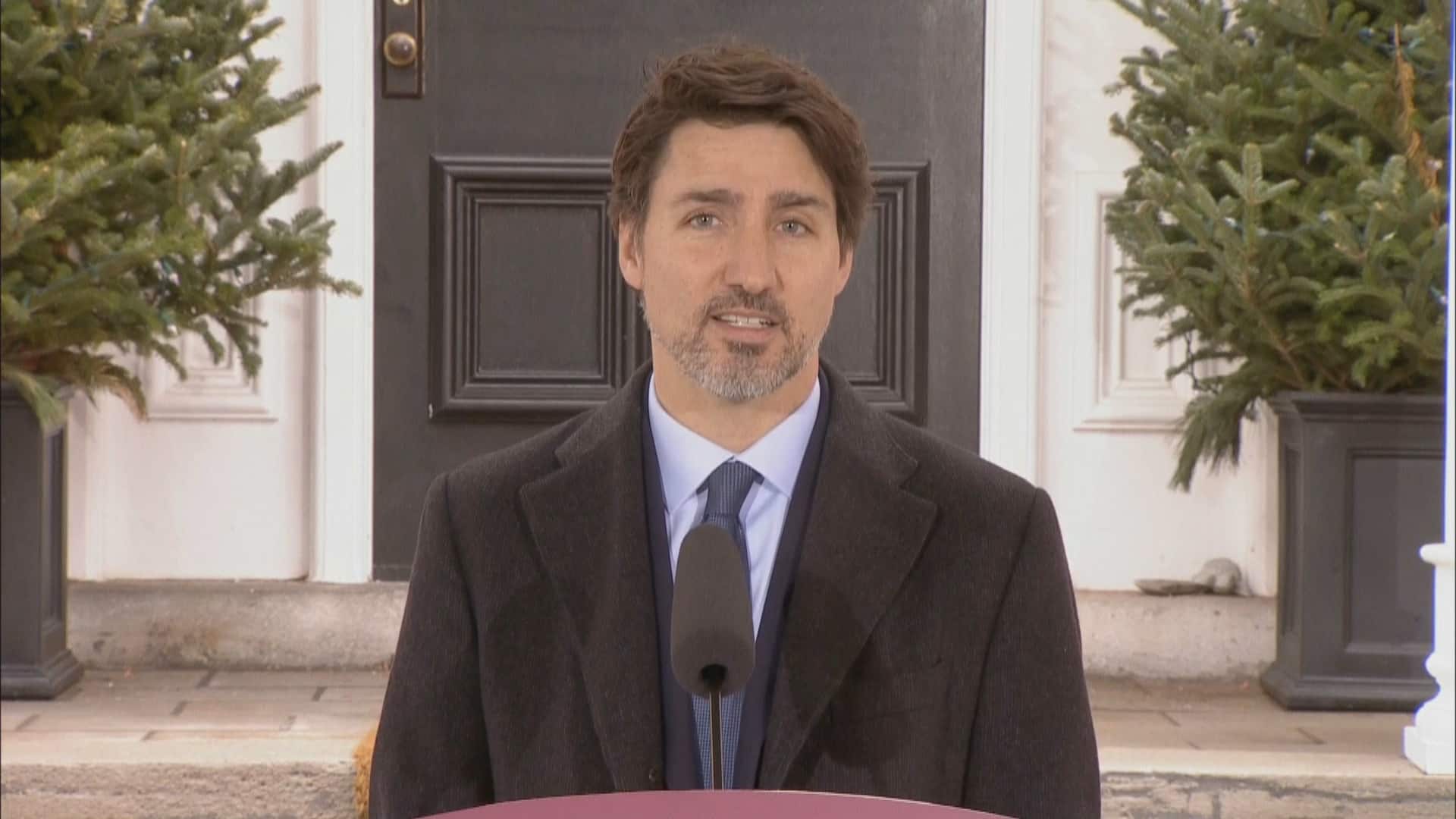 11 months ago
1:54
Prime Minister Justin Trudeau has announced that businesses and non-profit organizations seeing a drop of at least 30 per cent in revenue due to COVID-19 will qualify for the government's 75 per cent wage subsidy program. 1:54

Trudeau said the wage subsidies will be retroactive to March 15, 2020.

More details of the program will be unveiled tomorrow by Finance Minister Bill Morneau.

Trudeau also said that the program must operate on a basis of good faith and trust — and warned that there will be "serious consequences" for those who abuse it.

"We are trusting you to do the right thing," he said. "If you have the means to pay the remaining 25 per cent that is not covered by the subsidy, do it.

"And if you think this is a system you can game or take advantage of, don't."

Trudeau said there will be measures in place to prevent exploitation but added that, in a time of "unprecedented" emergency, the government had to act quickly.

He said those who do take advantage of the program will face "stiff consequences" from society and the government.

The Canadian Federation of Independent Business (CFIB) said it's pleased the government appears ready to keep the administrative requirements light to ensure the money flows swiftly.

"We stand ready to support government with any retroactive measures needed to address anyone found cheating the intent of this or other support programs," says a statement from CFIB.

"The decision to make the wage subsidy widely available to employers of all sizes and structures is the right approach given the unique nature of the COVID-19 pandemic," the statement reads. "The wage subsidy is the single best measure to help Canada prepare for a quick recovery the minute the emergency phase of the pandemic is over."

Aaron Wudrick, federal director of the Canadian Taxpayers Federation, said that while abuse of the program is likely, the government has no option but to deliver "economic life support" during the pandemic.

"They're blunt instruments, drawn up in a rush, but because speed is of the essence right now, there's not much alternative," he said.

"As long as measures are temporary, tracked and targeted as best as reasonably possible under the circumstances, I think that's about the best we can expect."

"There are also still two more recommendations Conservatives have made that the Liberals must implement that would support small businesses and workers, including refunding all GST remittances to the small businesses that collected them in at least the last six months, as well as backstopping banks that extend low interest loans to small businesses," he said in a statement.

Freeland said the government also is looking at ways to help hard-hit sectors but she would not "pre-empt future announcements."

"I'd like to assure all Canadians that we very much understand that particular sectors of the economy, whether it is tourism and aviation or the energy sector, are facing particular strains because of the impact of the coronavirus both in Canada and worldwide," she said. "We are very mindful of that and it is something that we are definitely focused on."

Trudeau announced the broad strokes of the support programs Friday, saying the new measures would help small businesses avoid layoffs or closures because of economic uncertainty caused by the global pandemic.

Today's news that the wage subsidy program also will be available to larger businesses was welcomed by the Business Council of Canada, which noted the virus doesn't discriminate between big and small businesses.

The Canadian Chamber of Commerce also called it a good move, saying that it will help avoid high unemployment and the devastation it brings to local economies, while also preparing big companies to ramp back up quickly after the crisis subsides.

The decision to extend the wage subsidy to all businesses also removes potential administrative burdens or delays that could be caused by confusion over what constitutes a small or medium-sized business.

The government previously announced a 10 per cent wage subsidy for businesses, but Trudeau acknowledged that was not enough.

Trudeau said the government also promised to guarantee loans of up to $40,000 for small businesses which will be interest-free for the first year, as a way to help businesses "bridge to better times."

Under certain conditions, up to $10,000 of the loans could be non-repayable.

Trudeau also announced that GST and HST payments, as well as duties and taxes owed on imports, will be deferred until June, which he said amounts to $30 billion in interest-free loans to businesses.

New details about the programs come at the beginning of what Canada's chief public health officer Dr. Theresa Tam has described as a crucial week in determining whether physical distancing and other measures to stop the spread of the virus are having a significant effect.

Tam said Sunday she is closely watching Ontario, Quebec and Alberta — provinces where there has been community spread of the virus — to see if there is a decrease in the rate of infections.

As of midday Monday, Canada's provinces and territories had reported more than 7,200 confirmed and presumptive COVID-19 cases.

Public health officials have cautioned that those numbers don't capture the full picture, however, because there are people who haven't been tested, people who are being investigated as possible cases and people who are still waiting for test results. A total of 1,014 cases have been listed as recovered or resolved.

There have been 70 COVID-19 deaths reported in Canada. There also have been two COVID-19-related deaths of Canadians abroad — one in Japan and one in Brazil.

Mandatory closures of businesses and other economically damaging measures caused by the public health emergency have led to millions of Canadians being thrown out of work. More than 1.6 million Canadians have applied for employment insurance (EI) in less than 10 days.

Canadians, whether they qualify for EI or not, can soon apply for the the Canada Emergency Response Benefit (CERB), which offers income support for up to 16 weeks to those who lose their jobs, get sick, go into quarantine or have to stay home because of school closures.

The benefit amounts to about $2,000 a month. The government has said an application portal run by the Canada Revenue Agency will be set up in early April — possibly by April 6 — and that payments should flow about 10 days later.

Canadians already receiving employment insurance (EI) regular benefits and sickness benefits will continue to receive those benefits and should not apply to the CERB.

Canadians who already have applied for EI and whose application has not yet been processed don't need to reapply.

Those who are eligible for EI and sickness benefits will get CERB benefits first; they can then get EI if they're still unemployed after the 16-week period covered by the CERB.

CERB benefits are taxable, but not until tax time.