Prime Minister Justin Trudeau took his pitch about Canada’s openness to trade and investment directly to some of the richest and most powerful business leaders in the world on Wednesday.

Justin Trudeau has spent a lot of time during his visit to China talking about Canada's openness to trade and investment.

On Wednesday he made that pitch directly to some of the richest and most powerful business leaders in the world.

The prime minister gave the keynote address at the opening of the Fortune Global Forum in Guangzhou. It's an invitation-only event that's best described as the Davos of Asia. It's intended for big investors, tech titans, leading academics and business scions who will spend three days discussing innovation and openness as the core principles of the economy of the future.

In other words, if you're looking for foreign investment for your country, if you're pitching Canada as the cutting edge of the new economy, this is the place to be.

The guest list is small and exclusive. The chairman of Ford Motor Company is here. So are the CEOs of Apple and Ericsson and a host of other Fortune 500 companies, international banks and multinational corporations.

"You're quite the impressive crowd," Trudeau said at the opening of his address, a comment that went by with nary a chuckle. The folks here know that.

Trudeau is one of only two heads of government at the forum so he made the most of his featured speaking slot, delivering a sermon most Canadians would recognize. Some might even know it by heart.

"By keeping our borders open, and pursuing progressive trade deals that put people first and reflect our values, we give our businesses access to more customers, and we give our customers greater access to the goods they want. This is the Canadian way. We are, and have long been, a trading nation."

Pitching in public and private

Trudeau spoke of Canada's well-educated workforce, and its stable of young entrepreneurs who've started companies like Shopify and Hootsuite that compete globally. He talked about recent decisions by Amazon, Facebook and Alphabet to invest in Canada.

And he told them why.

"Our business environment is stable and predictable, which is key when you're mapping out the next 15-20 years of your company's growth," he said. "Business costs are low – in fact, they're the lowest overall in the G7 – and our banking and legal systems are widely recognized as being among the most stable and sound in the world."

Trudeau didn't just make his pitch in public. He held private meetings with an array of business leaders from around the globe: William Ford Jr. of Ford Motor Company; Jack Ma, the president of Alibaba, China e-commerce giant; and others.

And that's how it's been throughout the visit. Trudeau's had access to the most senior circles of China's elites, which included dinner with President Xi Jinping at his private guesthouse in Beijing, and a long working session with Premier Li Keqiang at the Great Hall of the People.

This summit extended Trudeau's focus this week on building deeper ties with China, to try to diversify Canada's export markets beyond the United States in the event that difficult NAFTA talks underway end up in failure, or if the Trans-Pacific Partnership, now nearing completion, is similarly stalled.

Under Trudeau, Canada has signed the trade deal with Europe, which not only guarantees Canadian goods and services tariff-free access to the European market, but also includes chapters promoting labour and gender rights.

But China might be the biggest prize of all. The venue, at the Shangri-la Hotel in Guangzhou, is exactly like the country itself: majestic and sprawling, new and dynamic. In short, a perfect showcase for China and its outsized influence on the global economy. A wall-sized poster of the conference is displayed against a stunning photo of the gleaming skyscrapers lining the city's riverfront.

No mention of disagreement

Copies of Xi's book, The Governance of China Volume 2, are prominently displayed in the main hallway. It's not clear if they are for the taking. But photos are definitely encouraged.

Trudeau spoke of his efforts to break down trade barriers with China, and of common goals. He did not mention any areas of possible disagreement.

"When it comes to trade and international co-operation, China and Canada share the belief that more openness and more collaboration is the right way forward. Closing our doors will only hurt our businesses, and our citizens." 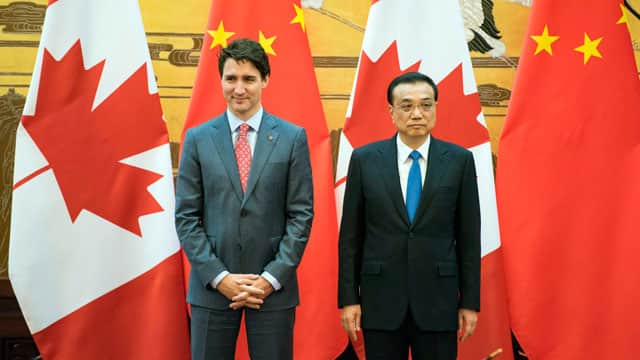 Canada and China don't have a trade deal

3 years agoVideo
3:57
Canada and China don't have a free trade deal yet, despite the expectation talks were to be announced during Prime Minister Justin Trudeau's latest visit to Beijing. Meetings with the Chinese premier did however yield a deal to boost some key Canadian exports 3:57

Meanwhile, back in Beijing, International Trade Minister François-Philippe Champagne continues to negotiate with his Chinese counterparts just to get to the point where formal trade talks can actually begin.

Canada may get there before Trudeau returns to Canada on Thursday. It may not.

In either event, the prime minister continues to make his sales pitch for Canada to audiences that have the power and the means to buy into it.