In January 1976, then prime minister Pierre Elliott Trudeau rankled many when he became the first NATO leader to visit Fidel Castro's Cuba. The two got on famously, developing a close bond that would last for decades after that encounter.

Now, his son, Prime Minister Justin Trudeau, is heading to the Caribbean country Tuesday to try and rekindle the special bond as part of a three-country tour that will also take him to Argentina and Peru, where an APEC summit is being held.

The current prime minister faces a much different Cuba than his father, who descended on the fledgling Communist country at a tense time, while the Cold War was raging.

"Canadians imagine a special kind of relationship, because it's not one the Americans had, and it all harkens back to that Trudeau visit. We have been dining out on that idea in Cuba ever since," Robert Wright, the author of Three Nights in Havana, the definitive account of the trip, said in an interview with CBC News. 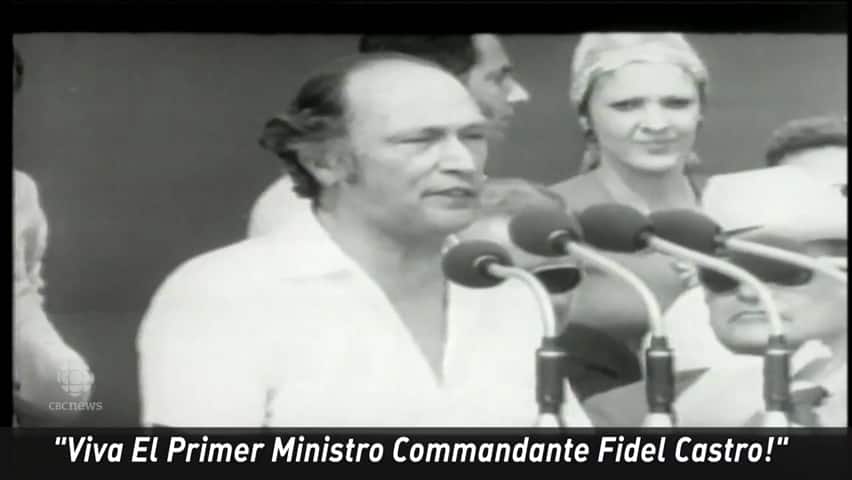 4 years ago
0:46
Like his father before him Prime Minister Justin Trudeau prepares to visit communist Cuba 0:46

The historian said Canada has in recent years been relatively "nonchalant" about maintaining ties with Cuba. "I would dare say that the idea that Canadians had a special place in Cuba is probably disappearing very quickly ... because Americans are free to go to the island."

More than 250,000 people turned out on the streets of Havana to welcome Pierre Trudeau, Wright said, interpreting his visit as a friendly gesture amid global tumult.

But the visit wasn't quite as well-received in Canada, where critics said the prime minister was lending legitimacy to an authoritarian regime backed by the big guns in Moscow.

Trudeau made the visit to damp down tensions, and to "see the humanity of the enemy," Wright said.

"Trudeau went expecting not to change Fidel's mind, or have his own mind changed, but rather to be able to sit down and speak respectfully with someone whose ideas he didn't share."

"These two somewhat aloof, cerebral, contained, emotionally unapproachable guys hit it off. Fidel was smitten by him."

Castro, who was seven years younger than Trudeau, came to see the Canadian leader as a mentor, someone he trusted, Wright said, and a leader with whom he regularly consulted.

It was more than friendly relations among world leaders, it was, as Alexandre Trudeau would write in a glowing tribute to the Cuban leader in a 2006 newspaper op-ed, "extra-political."

"Indeed, like my father, in private, Fidel is not a politician. He is more in the vein of a great adventurer or a great scientific mind. Fidel doesn't really do politics. He is a revolutionary."

Castro was particularly fond of Michel, Justin's late brother, who accompanied his father and mother, Margaret, on that 1976 trip.

"He was falling all over the baby, cooing for the cameras," Wright said.

Castro later welcomed Michel to the island for special visits for many years after that first encounter — including one in early 1990s, when Justin tagged along.

Castro, Wright said, was devastated by Michel's death in an avalanche in 1998, and was equally distraught when Pierre Trudeau died. He made the trip to Montreal for Trudeau's state funeral, where he was seen hugging a teary Justin.

​The prospect of the current prime minister replicating that sort of close, long-standing personal relationship with Raul Castro, Fidel's brother and successor, is unlikely, Wright said, in part because of the massive age gap between the two. (Raul is 85.)

The visit is also for roughly 24 hours, and won't include a great deal of personal time to forge closer ties.

"If 'Viva Raul' is uttered by the prime minister, I'd be very surprised," Wright said.

He also doesn't expect Trudeau to push too hard on the country's persistent problems with human rights, saying Trudeau will likely follow a similar tack to the one he took during a recent visit to China.

"It's not likely that he will go to Havana with any kind of heavy-handed agenda on political reforms. He has to walk that knife's edge."

But the trip to Havana won't be complete, Wright said, without paying a visit to his father's old chum.

"Presuming that Fidel is well enough, and lucid enough, to see him. I'd be very surprised if that wasn't on the agenda, even if briefly."