RCMP refuses to say how it spent $153,504, cites security concerns

A document obtained by CBC News under the Access to Information Act reveals the RCMP spent more than twice the amount it initially listed in its response to a question posed by a member of Parliament earlier this year.

The new figures from the RCMP bring the cost to the Canadian government of Trudeau's stay as a guest of the Aga Khan on Bell Island to $215,398. That amount, which covers the RCMP, DND, Global Affairs Canada and the Privy Council's costs, is 70 per cent higher than the $127,187 tab first tabled in Parliament.

The news that the trip cost more than initially believed comes as Trudeau is under investigation by Parliament's ethics watchdog and already under opposition fire for the cost of the Christmas holiday trip in 2016 to an exclusive private island in the Bahamas.

At the time, it said the total represented all payments processed by Feb. 1, 2017. "There may be additional payments still in accounts payable processing," it wrote.

In the new document, the force now says the "total cost of all expenses incurred" was actually $153,504 — $81,515 more than it initially told Parliament.

The RCMP has not updated the figures it gave Parliament.

The RCMP's initial response to the access to information request from CBC News for details of its spending was that costs of the trip "were not tracked separately" and could not be provided. It was weeks after CBC News pointed out that costs had already been provided to Parliament that the RCMP released the new figures but has not released any details.

The document also says "the Prime Minister did not attend the entirety of the trip" but offers no further explanation.

Cameron Ahmad, media relations manager for the Prime Minister's Office, refused all comment on the trip or its costs.

"We never comment on matters relating to the prime minister's security — those are questions best directed to the RCMP."

Trudeau was asked about the costs Wednesday during the Liberal cabinet retreat in St. John's.

"All prime ministers in the past and certainly into the future, wherever they go, whenever they travel, they require a professional and excellent RCMP detail," he told reporters. "I'm not going to question the job or the choices that the RCMP makes, that is something that I think all Canadians can take pride in, the excellence and abilities of the RCMP to do their job." 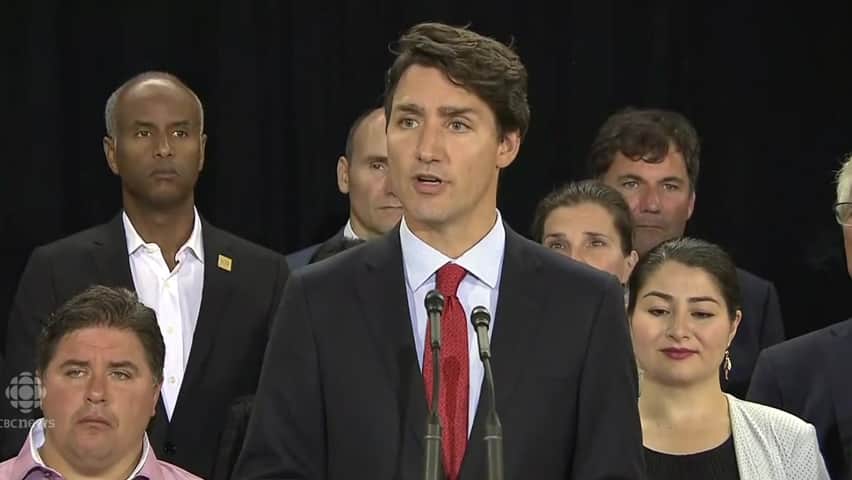 3 years agoVideo
0:53
PM Justin Trudeau is again defending the cost of his vacation to the Aga Khan's private island in the Bahamas last Christmas, saying that the RCMP are the ones who make choices on how he and his family are guarded when traveling abroad. 0:53

He provided little additional explanation when asked about how the money was spent or the difference between the length of the RCMP's trip and the prime minister's.

"The costs captured for this trip are reflective of security costs related to protecting the PM and his family," Pfleiderer said in the email response.

Trudeau has repeatedly come under Opposition attack for taking the trip to the exclusive private island nestled in the turquoise blue waters of the Exumas. Liberal MP and longtime friend Seamus O'Regan and his husband joined Trudeau's family on the island along with Liberal Party president Anna Gainey and her husband Tom Pitfield, a longtime friend and a key member of Trudeau's election campaign team.

Trudeau has defended the trip, arguing that the Aga Khan – leader of the world's Ismaili Muslims – is a longtime family friend.

Trudeau has reimbursed the government $4,895 for the Department of National Defence flight to Nassau for his family and nanny Marian Pueyo. DND has estimated the CC-144 Challenger flights cost $32,000 in flying time and $1,720 in food, beverages and associated fees.

The investigation, which stems from complaints made in January by two Conservative MPs, is the office's only active investigation at the moment, said spokesperson Jocelyne Brisebois.

One complaint, filed by Conservative Party Leader Andrew Scheer, alleges that Trudeau put himself in a conflict of interest by accepting the lodging and transportation to Bell Island from the Aga Khan.

The Aga Khan Foundation has received millions of dollars from the Canadian government for its work around the world in developing countries. It is also registered to lobby several government departments, including the Prime Minister's Office, for funding for its development projects.

The other, filed by Conservative MP Blaine Calkins, says Trudeau's decision to fly aboard the Aga Khan's helicopter from Nassau to Bell Island violated the prohibition on prime ministers and cabinet ministers accepting free flights in private aircraft.

Trudeau has also come under fire for the amount of money his vacation cost the Canadian government.

Anytime a prime minister travels — even on vacation — it costs money. For example, security rules require that he travel by government aircraft and be accompanied by a special team of RCMP officers. A Privy Council technician travelled to Bell Island to set up a temporary secure office and a diplomatic courier from Global Affairs Canada brought equipment for the trip to the Bahamas in a diplomatic "pouch."

In addition to the costs incurred by the RCMP and DND, Global Affairs spent $15,172 and Privy Council shelled out $13,000, including $1,604 to cover the technician's food and lodging to Lexthree Ltd., a Bahamas company whose directors included a woman listed elsewhere as the Ismaili Imamat's head of international financial affairs.​

Opposition critics were quick to react.

"I think that the prime minister should have been much more prudent in picking an exotic location for a personal vacation and, as he said, a family visit, and then imposing or downloading that cost — $215,000 — on Canadian taxpayers."

Kent said most Canadians would consider the cost to government for the prime minister's vacation as "unacceptable."

"Most of us, when we go hang out with a family friend, it doesn't cost the taxpayer a quarter of a million dollars."

Kent and Cullen said the RCMP should be able to provide more explanation of the costs without jeopardizing the prime minister's security.