Trudeau 'disappointed' by 'backsliding' on abortion rights in U.S.

Prime Minister Justin Trudeau said today he is "deeply disappointed" by "backsliding" on abortion rights in the U.S. and around the world, and promised that Canada will remain a staunch defender of a woman's right to choose.

Prime Minister Justin Trudeau said today he is "deeply disappointed" by "backsliding" on abortion rights in the U.S. and around the world, and promised that Canada will remain a staunch defender of a woman's right to choose.

Trudeau said Canadians can feel reassured that the federal government will continue to stand "unequivocally" for women's rights and the right to choose, and that people around the world can know they "will always have an ally and a defender in Canada."

"Obviously we are deeply disappointed by the backsliding on women's rights that we're seeing in some places around the world, including some American states," he said during a news conference in Paris.

"As a government, as Canadians, we will always be unequivocal about defending a woman's right to choose, defending women's rights in general." 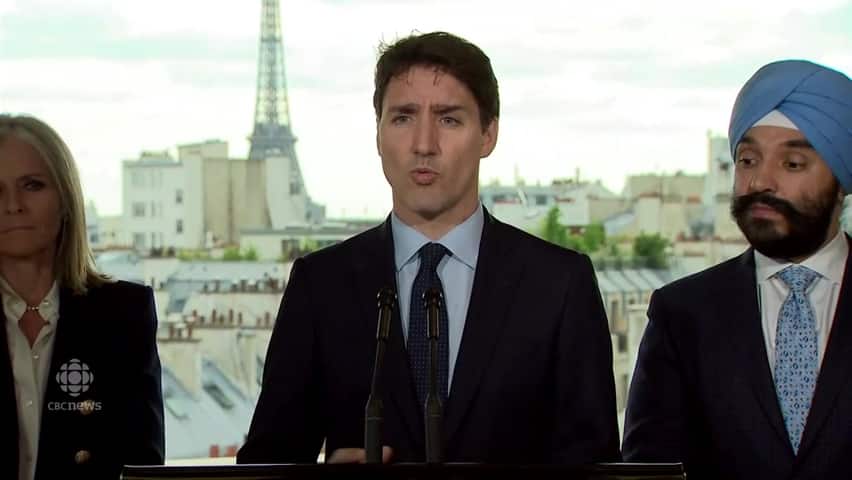 1 year ago
0:54
Prime Minister Justin Trudeau, speaking in Paris, comments on "disappointing" laws restricting access to abortion, particularly in some U.S. states, saying "it's a shame that we increasingly see conservative governments and conservative politicians taking away rights that have been hard fought." 0:54

Alabama's state legislature voted this week to criminalize abortion, making it illegal for doctors to perform the procedure. Other states are looking to restrict or ban abortion; Georgia, Mississippi, Ohio and Kentucky all passed so-called "heartbeat" laws this year.

Such laws make abortion illegal as soon as six weeks into pregnancy — believed to be the earliest point when a fetal heartbeat can be detected.

The anti-abortion movement has gained momentum under Donald Trump's presidency, and his appointment of two conservative Supreme Court justices has given activists hope that Roe vs. Wade, the 1973 decision legalizing abortion in the United States, will be overturned.

"It's a shame that we increasingly see conservative governments and conservative politicians taking away rights that have been hard-fought over many, many years by generations of women and male allies," he said.

"While some Conservative MPs are trying to reopen that debate by speaking at anti-choice events, screening anti-choice films, or empowering conservative politicians who 'pledge to make abortion unthinkable in our lifetime,' Liberals know that women in Canada have the right to make their own health decisions," the pitch for donations said.

"Women's rights are human rights, and we need to send a message that no one — including Andrew Scheer or any member of his caucus — has the authority to dictate to women what they can and cannot do with their own bodies."

The letter listed the names and ridings of the Conservative MPs who attended the rally, saying they have been busy "working to roll back women's rights" as the Liberals remain focused on ensuring that safe and legal abortion services are available to all Canadian women.

With files from the CBC's Lyndsay Duncombe