Canada marked the International Day Against Homophobia, Transphobia and Biphobia by introducing federal legislation that would guarantee full legal and human rights protection to transgender people across the country. 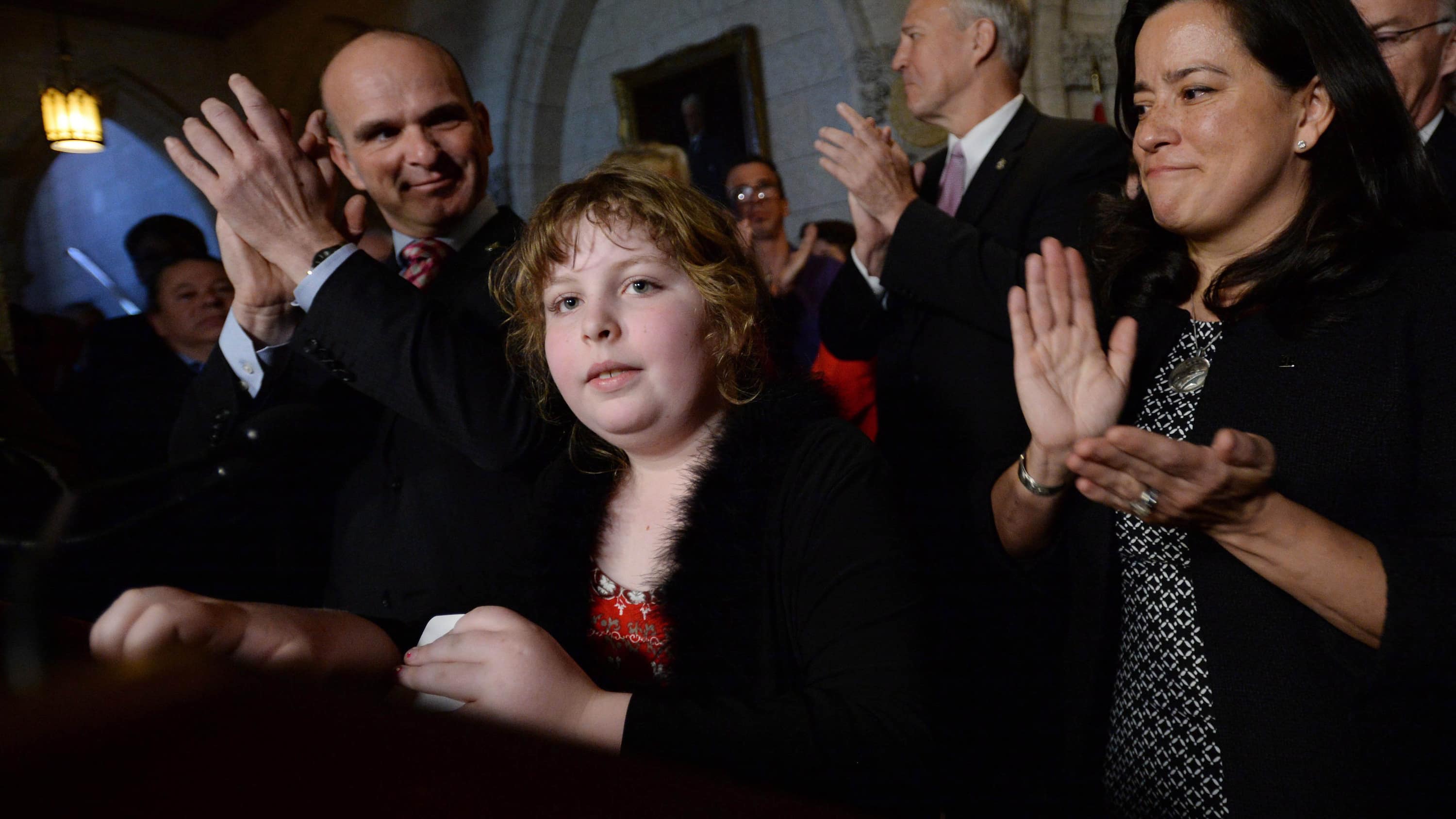 'I feel much safer'

5 years ago
0:53
Ten year-old Charlie Lowthian-Rickert, who is transgender, speaks along side Justice Minister Jody Wilson-Raybould 0:53

The Trudeau government introduced on Tuesday federal legislation that would guarantee legal and human rights protection to transgender people across Canada, casting it as the latest in a Liberal tradition of human rights advancements.

"I'm proud to say that moments ago, I introduced legislation, Bill C-16 ... that would ensure that Canadians will be free to identify themselves and to express their gender as they wish while being protected against discrimination and hate," said Justice Minister Jody Wilson-Raybould adding that, "because as Canadians, we should feel free and safe to be ourselves."

The proposed legislation was met with loud cheers and applause from several members and advocates of the transgender community who were invited to join the justice minister on the occasion of International Day Against Homophobia, Transphobia and Biphobia.

"Diversity and inclusion have long been among the values that Canadians embrace, and Canadians expect their government to reflect these values," said Wilson-Raybould in Ottawa on Tuesday.

The justice minister noted that Canada passed the Canadian Human Rights Act protecting people from discrimination based on sexual orientation, and was one of the first countries to recognize same-sex marriage with the passage of the Civil Marriage Act.

Each of those human rights milestones were reached under the former Liberal government of Pierre Elliott Trudeau and Paul Martin, respectively. 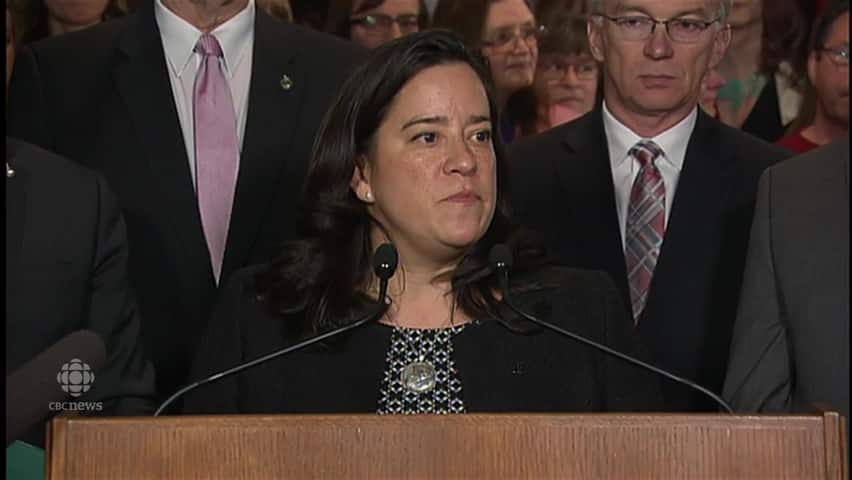 5 years ago
1:16
Jody Wilson-Raybould says the bill will amend the Human Rights Act and the Criminal Code 1:16

Bill C-16 would update the Canadian Human Rights Act and the Criminal Code to include the terms 'gender identity' and 'gender expression."

While the inclusion of gender identity and expression has been in the making for over a decade, this is the first time such legislation is being proposed by a sitting government.

If passed, the legislation would make it illegal to discriminate on the basis of gender identity or expression. It would also extend hate speech laws to include the two terms.

Criminal laws would also be updated to make it a hate crime when someone is targeted because of their gender identity or gender expression, meaning judges would have to consider it as an aggravating factor in deciding what sentence to impose

Wilson-Raybould was joined by Charlie Lowthian Rickert, a 10-year-old transgender girl, whom she described as "wise beyond her years."

The young girl said the proposed bill made her feel safe and gave her a sense of hope for a better future.

"It will improve our future so that we can live a more accepting, a more joyful life ...," Rickert said to a loud round of applause.

"It will protect us from, as the minister of justice said, hateful propaganda, assaults, rape — stuff like that. It could protect us and stop the people who would have just gone off and done it in the past, and discriminated or assaulted us but now it could be stopping them and basically punishing them  if they actually do it."

"I feel much safer," she said.

A survey conducted by Trans Pulse Project in 2010 showed that out of the almost 500 transgender respondents in Ontario, 20 per cent reported having been physically or sexually assaulted, though not all of them reported the assaults to police.

The respondent-driven sampling survey found 13 per cent reported being fired and 18 per cent refused a job because they were transgender.

The New Democrat has made several attempts over the years to introduce similar legislation through various private members' bills, only to see them die on the order paper or be defeated in the Senate.

"This is an important day, but I want to remind people this is the seventh time that this bill has been introduced in the House of Commons," Garrison said on Tuesday.

"What makes today special is it's the first time that it's a government bill," the NDP critic for LGBT issues said.

Garrison thanked the government for going beyond its election promise to include the full protections for gender identity and gender expression that he included in his most recent private member's bill.

The New Democrat urged the Liberal government to ensure its "swift" passage through the Commons and "guarantee" the bill would pass the Senate this time.

'We stand up and we get kicked down'

Joanne Law, a transgender woman and activist of 30 years, welcomed the new Liberal bill but said she feared the Senate would block it once more.

"Every year, we stand up and we fight some more. It can get tiring because some people in the Senate don't want this to happen," Law said in an interview with CBC News.

"We stand up and we get kicked down — it's just nuts," she said.

Conservative Don Plett is among those senators who voted against similar legislation in the past, specifically opposing having transgender people use public washrooms that correspond to the gender they identify with.

Today, Plett was asked by reporters whether he would support Bill C-16.

"My views on the issues have not changed, they probably will not change," Plett said adding that he would make a decision in the coming weeks."

Groups including Trans Equality Canada, Amnesty International, the Centre for Israel and Jewish Affairs, and the Canadian Association of University Teachers all praised the move by the Liberals, calling it a long overdue move in the path towards equal rights for all Canadians.

Marni Panas, a longtime advocate for lesbian, gay, bisexual, and transgender issues in Alberta, travelled to Ottawa so she could be in the Commons when the legislation was tabled today.

In an interview with CBC News after the government tabled Bill C-16, Pana said the hard work was just beginning.

Panas said although she was labelled male at birth, she always identified as a girl but it wasn't until two years ago that she began to express her "true gender" in public.

Panas, who has been married to the same woman for 20 years and has a nine year-old son, spoke very openly about the challenges her family has faced.

"She's taught me, and my son has taught me more about — more about unconditional love and acceptance than I could ever teach them," an emotional Pana said as she paused in the middle of the sentence to regain her composure.

"Words are one thing, but it's the action that is going to matter. Our work doesn't end here today. Our work starts here today," she said.

"Seven tries to get it through Parliament and now we're on the first step of what looks like a possibility of actually getting it through," Ryan said in an interview with CBC News.

Ryan said the "positive attitude" of the Trudeau government gave the transgender community hope the bill would not get stalled in the Senate.

Asked whether transgender Canadians face the same level of bigotry as seen in the U.S. where some lawmakers have restricted the use of public restrooms by transgender people, Ryan said discrimination in Canada does exist.

"We have to fight discrimination. In typical Canadian fashion, it's very subtle. No one loses their job because they're trans but someone else will be put into that position," Ryan said.

Prime Minister Justin ​Trudeau on Tuesday encouraged all Canadians to do their part in raising awareness to end the prejudice faced by the LGBT community.

"Today is about ensuring that all people — regardless of sexual orientation or gender identity — feel safe and secure, and empowered to freely express themselves," Trudeau said in a written statement to mark the special day.

"There remains much to be done, though," Trudeau said adding, "Far too many people still face harassment, discrimination and violence for being who they are."

"This is unacceptable," the prime minister said.

After the announcement, Garrison — the NDP critic for LGBT issues — asked but failed to obtain unanimous consent to move the newly tabled government bill through the Commons.

Interim Conservative leader Rona Ambrose opposed similar legislation in the past, but today said she would vote in favour of the government bill.

"As the leader, I'm supporting it and my caucus will be free to make their decisions on that."