Canada and 10 other Pacific Rim countries have reached an agreement on "core elements" of the Trans-Pacific Partnership trade deal.

The 11 Trans-Pacific Partnership countries have reached an agreement on "core elements" of the trade pact, namely that all countries will adhere to strict labour and environment standards, a development Canada is championing as a major breakthrough after talks broke down earlier Friday.

A final agreement in principle is still in the works because the countries have not settled on all aspects of the deal.

The original TPP, which is currently under renegotiation after U.S. President Donald Trump pulled America out of the deal, included strong provisions that demanded all member countries eliminate child and forced labour, adopt and maintain laws and practices governing "acceptable conditions of work," and uphold the right to collective bargaining.

But some countries, including Malaysia and Vietnam, sought to opt out of such provisions during the talks, something Canada felt was untenable.

Those countries have now come back onside, International Trade Minister François-Philippe Champagne said, and have agreed to the terms of the original TPP.

"We got a better deal for Canada, we were also able to enhance the progressive elements — as the prime minister says you don't do trade in the 21st century like you did before," he said.

All countries have agreed now to implement regulations around minimum wages, hours of work and occupational safety and health, for example, something the original TPP called for.

Champagne said if a country does not adhere to these requirements as called for in the agreement, any country could haul another offending partner in front of a trade tribunal, and they would be subject to the dispute resolution process.

The 11 partner countries have now put "four specific items" aside to allow for further negotiations, notably chapters relating to rules of origin, which includes automotive parts, before a deal is signed. 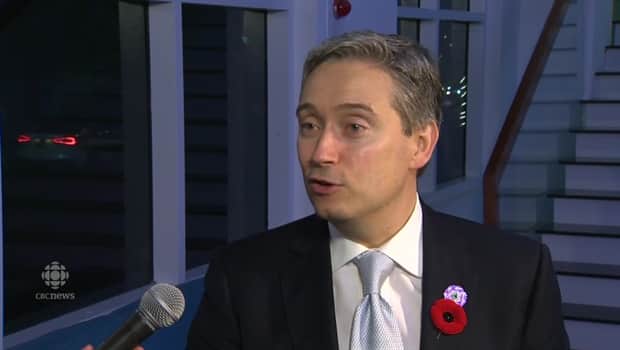 "What we have achieved today is identifying the areas where work needs to be done," Champagne said.

The revised pact — which has been called "TPP11" by some observers owing to the number of countries party to the deal after the U.S. departure — will now be referred to as the Comprehensive and Progressive Agreement for Trans-Pacific Partnership (CPTPP).

As for the environmental aspects of the deal, all countries have agreed to relatively vague provisions that demand "conservation and sustainable use of biodiversity," and the implementation of "mechanisms" to reduce carbon emissions. The deal also demands a degree of protection for wild flora and fauna, and measures to address overfishing.

The chapter relating to intellectual property has been "suspended," which means, in plain terms, that it will no longer be part of a renegotiated TPP, a victory for Canada as many companies — as well as Blackberry's former CEO, Jim Balsillie — were worried about those provisions. This chapter, which essentially applied U.S. patent laws to other member countries, was originally demanded by the former Obama administration.

In a statement sent to CBC News, Balsillie said Canada's success in getting other countries to drop IP considerations was a testament to the government's "shrewdness" and "sophistication" in these complicated negotiations.

"I am very pleased how Minister Champagne and Canada's negotiators are working to preserve policy flexibility for our country's future economic growth and how they continue to upgrade their knowledge of the 21st century economy where every business is a tech business," he said.

Canada is also pushing partners to change provisions relating to culture. Canada said the other 10 countries did "affirm the right of each party to preserve, develop and implement its cultural policies," but specifics have yet to be finalized.

"We all understand we need to do more on culture, I've said Canada will not settle for less. It was essential for me to fight for Canadian culture," Champagne said.

Some observers have warned the text of the original TPP, negotiated by the former Conservative government and ultimately signed by the Liberals shortly after they took office, would undermine the federal government's promotion of Canadian culture through funding for artists and financial support for film production, periodicals and public broadcasting.

The original TPP deal included weaker protections for cultural industries than in other trade treaties, including NAFTA and CETA, the Canada-EU free trade deal.

The preamble to TPP recognized the rights of countries to regulate certain sectors — public health, safety, the environment — but notably left cultural industries off the list, a departure for Canada, which, under governments of all political stripes, has pushed for a lot of leeway for federal and provincial governments alike to support cultural industries without fear of reprisal at a trade tribunal.

Earlier Friday, a planned meeting of TPP countries was unexpectedly cancelled after Prime Minister Justin Trudeau skipped the event when bilateral talks with his Japanese counterpart ended in disagreement.

At the time, a spokesperson for the prime minister said there was no consensus between the 11 member countries. Foreign Affairs Minister Chrystia Freeland said Canada was not the only initial holdout. "Certainly, my own understanding, our understanding, is that there are a few countries who continue to have some important issues that they'd like to be addressed. And I think that's reasonable," she said.

Japan had been lobbying hard for the TPP pact, which aims to eliminate tariffs on industrial and farm products across an 11-nation bloc whose trade totalled $356 billion last year.

Japanese Economy Minister Toshimitsu Motegi said late on Friday that all 11 countries had now agreed on the plan to move ahead.

Canada, which in the second biggest economy among remaining TPP countries after Japan, had said it wanted to secure a good agreement that would protect jobs, while Trudeau reiterated all week he was in no rush to put pen to paper.

Canada's position has been further complicated by the fact that it is simultaneously renegotiating the North American Free Trade Agreement (NAFTA) with the Trump administration.

At a speech in Danang, Trump set out a strong message on trade in which he made clear he was only interested in bilateral deals in Asia which would never put the United States at a disadvantage.