Tories not backing down from spat with chief justice

The Harper government did not back down Monday from its unprecedented public spat with the chief justice of the country's highest court. Indeed, Justice Minister Peter MacKay escalated the feud, implying the Supreme Court went beyond the strict wording of the law to nix Marc Nadon's appointment.

'Not in the Supreme Court Act': Justice Minister Peter MacKay 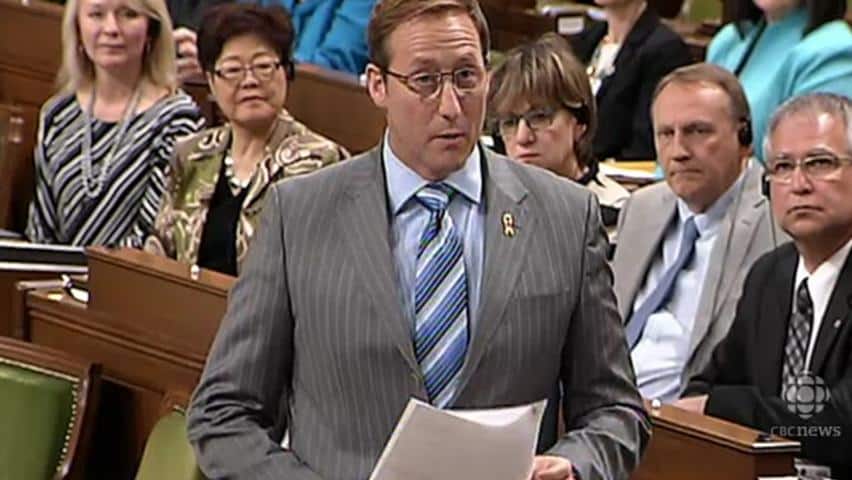 The Harper government did not back down Monday from its unprecedented public spat with the chief justice of the country's highest court.

Indeed, Justice Minister Peter MacKay escalated the feud, implying that the Supreme Court went beyond the strict wording of the law to nix the appointment of Marc Nadon to the top court's bench.

It was the Nadon decision that triggered a tit-for-tat war of words last week between Prime Minister Stephen Harper and Chief Justice Beverley McLachlin.

Last March, the court found Nadon ineligible to sit as one of three Quebec judges on the Supreme Court because he came from the Federal Court of Appeal.

The Supreme Court Act specifies that Quebec judges must come from either the province's Court of Appeal or Superior Court, or have at least 10 years standing at the Quebec bar.

However, MacKay told the House of Commons on Monday that, "prior to the ruling" of the top court, there was nothing in the act that "prohibited the appointment of a Supreme Court judge who had come through the Federal Court."

"That is not in the Supreme Court Act," MacKay asserted.

He reiterated that two former Supreme Court justices and legal experts consulted by the government advised that Nadon was eligible for appointment to the top court.

NDP Leader Tom Mulcair accused MacKay of trying to "replead his case" rather than accept the top court's ruling.

"The way Mr. MacKay's behaving today, you'd almost think that he was watching the playoffs and he thinks that Supreme Court judgments are a best-of-seven series," Mulcair said outside the Commons.

Last week, Harper accused McLachlin of inappropriately trying to make an "inadvisable and inappropriate" phone call to warn him that there might be an eligibility problem with Nadon's appointment.

"I think if people thought that the prime minister, other ministers of the government, were consulting judges before them or -- even worse -- consulting judges on cases that might come before them, before the judges themselves had the opportunity to hear the appropriate evidence, I think the entire opposition, entire media and entire legal community would be outraged," Harper said Friday.

"So I do not think that's the appropriate way to go."

McLachlin issued a statement clarifying that her warning occurred before Nadon had been chosen and before his appointment was challenged by Toronto lawyer Rocco Galati.

She said she was consulted by the parliamentary committee vetting potential nominees, as is customarily done.

While she warned MacKay of a potential eligibility issue, McLachlin said she expressed no opinion on the merits of the matter.

Nevertheless, MacKay stuck Monday to the government's version of events.

He said he advised Harper that he "did not need" to take a call from McLachlin on the eligibility issue, stressing that "neither the prime minister nor I would ever consider calling a judge where that matter is or could be before the court of competent jurisdiction."

Mulcair accused MacKay of complicity in Harper's attempt to "intimidate" the Supreme Court.

"It's a unique, unprecedented situation to have a prime minister and a justice minister taking potshots at the highest court in the land," Mulcair said.

"We know the vituperative and combative character of Mr. Harper but we've never seen this before."

Liberals zeroed in on a National Post column which triggered the feud, which cited anonymous Conservative sources saying the government was furious that McLachlin had "lobbied" against Nadon's appointment.

Liberal justice critic Sean Casey called it "an unprecedented smear" of the chief justice and a breach of the confidentiality rules that surround the judicial selection process.

Montreal MP Stephane Dion noted that only five Conservatives knew that McLachlin had been consulted on the appointment: Harper, MacKay and the three Tory MPs on the parliamentary selection committee.

He demanded to know which of them leaked misinformation about her role.