The federal Conservatives are calling for an investigation into the Liberal government's decision to have an international charity administer a $900-million program designed to help students during the COVID-19 pandemic.

The federal Conservatives are calling for an investigation into the Liberal government's decision to have an international charity administer a $900-million program designed to help students during the COVID-19 pandemic.

The request is contained in a letter sent to Auditor General Karen Hogan on Sunday in which the Tories argue that "outsourcing" the Canada Student Service Grant to WE Charity undermines Parliament's ability to monitor the aid program.

The Conservatives also noted the "well documented" connections between WE and Prime Minister Justin Trudeau as they underscored the importance of transparency, accountability and value for money in Ottawa's COVID-19 spending.

"By outsourcing this program to a third party, the proper channels for Opposition scrutiny, the very bedrock of our parliamentary democracy, have been circumvented," reads the letter signed by Conservative MPs Pierre Poilievre, Dan Albas and Raquel Dancho.

"Indeed, it is your office that will provide the most legitimate and transparent examination of this program."

The auditor general's office did not immediately respond to requests for comment on Sunday.

The Liberal government announced the Canada Student Service Grant last week as part of a broader suite of support for students and young people struggling to find internships, job placements and other work-related experience during COVID-19.

Eligible students can earn up to $5,000 for volunteer work with non-profit organizations that are helping to cushion the impact of the pandemic. The program is supposed to place up to 20,000 students in volunteer positions between now and October. 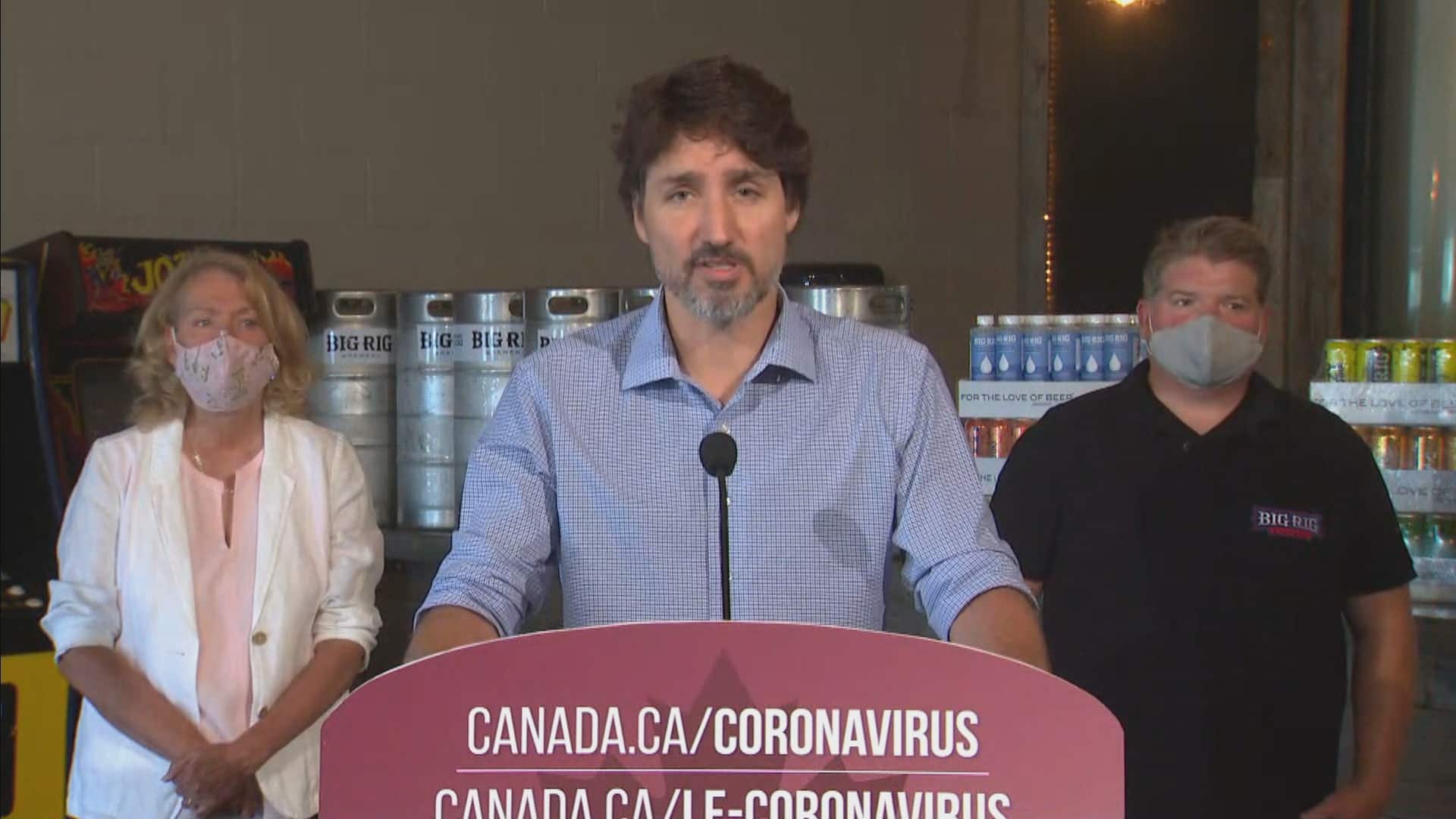 8 months ago
0:48
Prime Minister Justin Trudeau spoke with reporters from the Big Rig Brewery in the Ottawa suburb of Kanata. 0:48

Trudeau defended employing WE to administer the program after conflict-of-interest concerns were raised last week. The prime minister attended several WE events in the past and his wife, Sophie Gregoire Trudeau, hosts one of its podcasts.

The prime minister said the decision to use WE was made by the non-partisan public service, not by him. Delivery of the grant program demanded an organization able to reach the tens of thousands of students, he said.

WE directed questions Friday to the government.

The Conservatives want Hogan to incorporate her study of WE and the student aid program into her larger review of the government's pandemic-related spending, which is expected to be tabled in Parliament later this year.

Direct federal spending on emergency aid measures now stands at $174 billion, the government announced Friday, driven by a jump in the estimated cost of the Canada Emergency Response Benefit to $80 billion.

That is up from the previously revised $60 billion and more than double the original $35-billion estimate, as demand rises and recipients get ready to receive eight extra weeks of payments.

Statistics Canada's latest jobs report showed that returning post-secondary students, aged 20 to 24, had a record-high unemployment rate in May of 42.1 per cent, and about one-third had seen summer placements disappear because of COVID-19.

Data released Friday by the agency also found that youths in the so-called Internet generation were the most likely to formally volunteer. They contributed on average 82 unpaid hours to charities in 2018 and had a volunteer rate of 52 per cent.