The Conservative Opposition is accusing Prime Minister Justin Trudeau of trying to bribe Canadian media to secure favourable media coverage in the run-up to next year’s federal election.

The Conservative Opposition is accusing Prime Minister Justin Trudeau of trying to bribe Canadian media to secure favourable media coverage in the run-up to next year's federal election.

The accusations came a day after Finance Minister Bill Morneau announced in the fall economic update that the government was introducing $600 million in tax credits and incentives to help the media industry over the next five years.

"Justin Trudeau thinks it is the job of the media to shower him with praise and coincidentally, in an election year, he's forcing Canadian taxpayers to dole out $600 million in order to try and buy Trudeau the media's support as he goes to the polls," Conservative MP Pierre Poilievre told reporters Thursday.

Some of the money is expected to go toward a new tax credit for media organizations to support the production of content. Another tax credit will be aimed at subscribers to digital news outlets. The plan will also allow non-profit media outlets to apply for charitable status.

"It certainly gives the impression of potentially affecting, not necessarily individual journalists, but the organizations, the companies, the employers that they work for," said Conservative MP Peter Kent, a retired journalist himself.

"When the media, or media organizations, or in fact, individual journalist jobs are dependent on government subsidies that is the antithesis​​ of a free and independent press," he added.

You know what, journalists are the victims of the Trudeau Sponsored Content Fund. They’re all going to have to work extra hard to prove their objectivity in an era where everyone is a content creator. RIP free speech.

The Liberals defended the move in the House of Commons on Thursday, saying that journalists in Canada were capable of performing their jobs with integrity, regardless of the funding models of their employers.

Asked directly whether he thought the new program will compromise the work of journalists, Poilievre was unequivocal.

"So, Justin Trudeau and this system he's setting up will determine whether your mortgage gets paid. And you say that will have absolutely no impact on the nature of your coverage. Well I think you can forgive us for being just a little skeptical about that claim," he said.

"What Justin Trudeau is telling you is: Here's a half billion dollars; don't bite the hand that feeds you."

Not all conservatives agreed. Paul Godfrey, the president and CEO of Postmedia Network, which owns the National Post, is a self-described conservative who said he thinks the government's move is good for democracy.

"I think the Conservatives that are standing up criticizing this are just trying to make political hay when there is no political hay to be made," he told CBC News.

Godfrey said the decision to set up an independent council to decide how the money will be distributed is "quite fair, I think the fact is that nobody is trying to make political gain on this."

The full details of the federal government's plan will be revealed the next federal budget in the new year after the independent council of journalism professionals delivers its recommendations.

The Conservatives are accusing the federal government of trying to buy votes ahead of next year's election with its plan to issue $600M in tax credits and incentives for Canada's struggling media industry. Check out these heated exchanges in QP. <a href="https://t.co/lbF5bII1nM">pic.twitter.com/lbF5bII1nM</a>

Martin O'Hanlon, president of CWA Canada, the union that represents employees at CBC, The Canadian Press, Thomson Reuters, VICE Media and newspapers from coast to coast, said he has some concerns about how the money is going to be doled out. 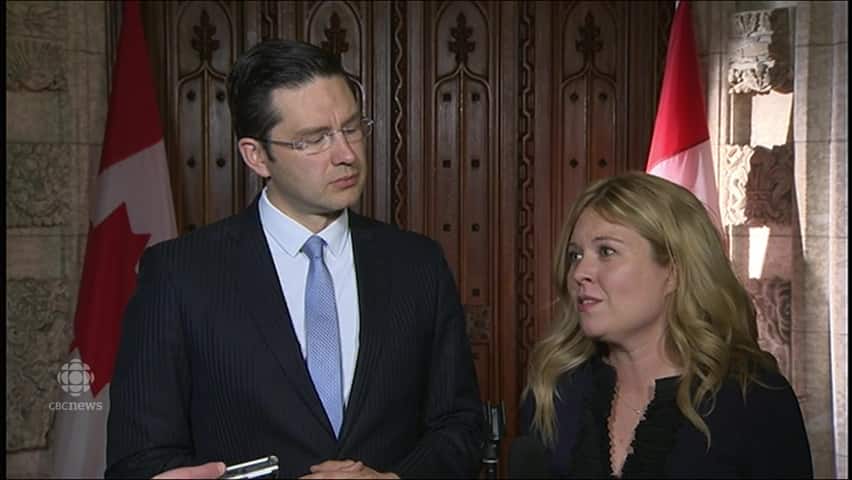 Rempel and Poilievre on media funding

"It will be very important that the right stakeholders are approached on this."

O'Hanlon, however, dismissed the notion that members of his union would be compromised.

"I don't see any connection there between the government getting something back in return for giving a tax credit," he said. "Every business, every person in Canada, pretty well, gets a tax credit. We don't all feel beholden to the government."

"I think there is enough separation here that that is not really a concern," he said.