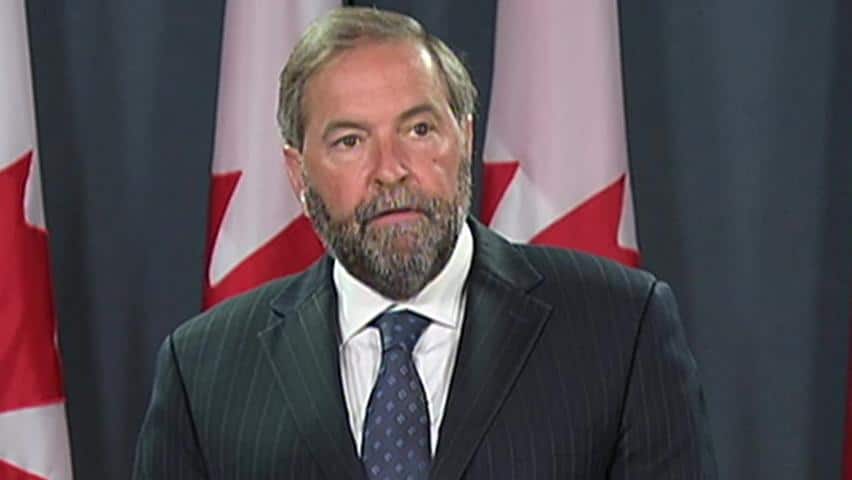 6 years ago
0:43
Tom Mulcair says an NDP government would call a national inquiry into missing or murdered aboriginal women within 100 days of being elected. 0:43

Mulcair's comments come ahead of a meeting of premiers and aboriginal leaders in Charlottetown on Wednesday.

"I'm here to announce that on our first day in office, an NDP government would begin consulting with First Nations, women's groups and other stakeholders on the terms of office for a national inquiry.

"Within 100 days in office, an NDP government will establish a full public inquiry," Mulcair told reporters during a news conference in Ottawa Wednesday morning.

Harper said the issue of 1,200 missing and murdered aboriginal women is not a "sociological phenomenon."

"We should view it as crime," Harper said.

"Mr. Harper callously claimed that these brutal acts should not be viewed as a 'sociological phenomenon.'

"This offensive comment ignores the disproportionate levels of violence that aboriginal women do indeed face in our country. And it ignores the fact that this violence is indeed systemic," Mulcair said.

Saskatchewan Premier Brad Wall said although there is a criminal element to the many cases of missing and murdered aboriginal women, "there is a societal part to it."

While Wall is supportive of a national public inquiry, he said it's clear the federal government isn't interested in calling one.

Speaking to CBC's Evan Solomon in Charlottetown today, Wall said that's why the premiers and aboriginal leaders need to take action of their own.​But Mulcair would not let the federal government off the hook so easily saying taking action without Ottawa would lead to a "patchwork" of solutions.

"Any inquiry that is not called by Ottawa, although well-intentioned, would only answer a part of the problem."

Mulcair attacked Harper for his handling of a wide range of issues, from the F-35 to Canada Post, describing him as "a serial incompetent."

Liberal MP Stéphane Dion called on Harper to work in consultation with the premiers. They called for a national public inquiry during last year's summer meeting.

"The prime minister should work with the provinces and territories, municipalities and of course aboriginal communities in order to have a public inquiry to have the additional information we need."

A spokesperson for Justice Minister Peter MacKay said another study will not lead to catching Fontaine's killer.

"We don't need yet another study on top of the some 40 studies that have already been done.

"We need police to catch her killer and ensure the perpetrator or perpetrators are punished and face the full force of the law," MacKay's press secretary, Clarissa Lamb said in a statement sent to CBC News.