The clock ticks and the parties scramble as pollsters find anti-Harper voters moving away from Justin Trudeau and toward Tom Mulcair.

NDP surge in polls puts a scare into federal rivals

What to do about Tom Mulcair? How to stop these upstart New Democrats?

Spare a thought for rattled strategists in the Conservative and Liberal parties as they ponder the pollsters' reports.

No wonder Mulcair wore a big grin during his speech Tuesday to the Economic Club in Toronto. "Canadians are now seeing us as a government in waiting," he told reporters afterward.

Well, maybe. There's still four months to go. But, from the other parties' viewpoints, it's scary. Somehow, what they're doing isn't working.

The Conservatives keep hammering away at their economic record — lower taxes and a balanced budget — and at their toughness on crime. Amid a flurry of speeches Tuesday from all three major parties, Justice Minister Peter MacKay tried to grab some attention for his pledge to increase penalties on drunk driving.

Likewise, Liberal Leader Justin Trudeau hyped, tweeted and crowed about his pledge of "real change" and transparency. Electoral reform! Half the cabinet will be women!

And yet, record numbers of voters have been telling the pollsters they're listening to the NDP. According to Angus Reid, the Dippers have actually pulled ahead of the Conservatives by three points — 36 per cent to 33 per cent.

And the Trudeau surge? That's so last year. Now, Angus Reid has the Liberals trailing badly at 23 per cent.

They can't look to EKOS for comfort. That poll assigns the Liberals the same number — 23 per cent — which is just four points better than their disastrous showing in 2011. Even crueller, the Conservatives came in at 27 per cent — down 12 points from 2011 — while the NDP floats gravity-free at 33 per cent. That's two points higher than the record-high Orange Wave of four years ago.

Not anymore. And those nervous Conservative and Liberals strategists will find more alarming news in the details of these findings.

Actually, the "geezer vote" is more than a detail. Those aged over 55 are a key demographic, because they actually turn out and vote in far greater numbers than the young, who tend to tell pollsters how progressive they are and then stay home on election day.

So what is the 55-and-over crowd saying? Angus Reid says the Conservatives are holding on to 38 per cent of them. But the NDP, which had only 22 per cent of them six months ago, are up 11 points now at 33 per cent.

And, if the Conservatives are holding steady, we can guess where the NDP's gain is coming from. Sure enough, the Liberals, who had 32 per cent six months ago, now stand 10 points lower, at 22 per cent of these older voters.

Time was, voters keen to remove Harper were divided between the Liberals and the NDP — and they still are. But many of those who flocked to Trudeau's banner last year seem to be reconsidering.

Again, the Liberals needn't go running to EKOS for a different story. EKOS puts the NDP squarely in the lead in all age groups up to age 64. Among those 65 and older, they're tied with the Liberals, and the Conservatives are ahead.

The EKOS poll of 2,491 Canadian adults aged 18 and over was conducted June 3 to 9 for iPolitics. The random-sample interactive voice response survey has a margin of error of plus or minus two percentage points. The Angus Reid Institute analyzed results from an online survey of 6,005 Canadian adults who are Angus Reid Forum panelists conducted May 26 to June 7.

Everybody loves the middle class

After Alberta, apparently, anything is possible. Rachel Notley's stunning NDP victory seems to have given voters ideas.

So, the Conservatives and Liberals are scrambling to stomp on the NDP revival. And, just as energetically, the New Democrats are striving to seem as unthreatening as possible.

Hence, the deep and abiding love all the parties profess for the middle class.

Are you feeling middle class? Squeezed, indebted and struggling? Then prepare to be bombarded by promises, because you — young and old alike — are the most important demographic of all. Almost everyone thinks they're middle class.

Mulcair, therefore, is sparing no effort to assure the middle class the NDP is the real, fiscally responsible party — unlike those reckless "old-line" parties.

Consider his speech Tuesday, riddled with references to the NDP's record of "prudent fiscal management" in the provinces. The only exception, he said, "turned out to be a Liberal," a dart aimed at Bob Rae, the Dipper-turned-Liberal who once ran Ontario.

"You have to do a good job of balancing the budget," Mulcair added. He even stole a line from the Conservatives to jab Trudeau: "I don't believe that budgets balance themselves." 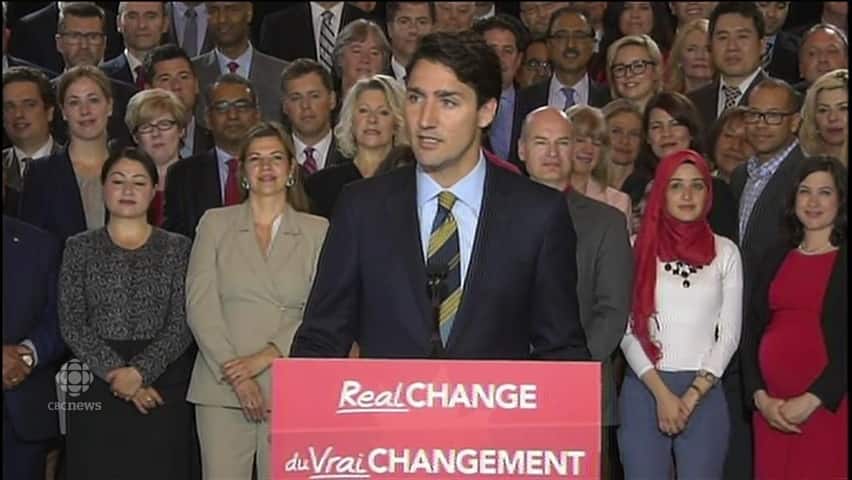 6 years agoVideo
3:17
Liberal leader's speech outlines a plan to bring in major electoral reform if his party forms government, including the end of first-past-the-post voting 3:17

Trudeau, in turn, stole one of the NDP's lines: electoral reform. The NDP has long supported an end to the first-past-the-post voting system and, now, Trudeau does, too.

"We will ensure that electoral reform measures — such as ranked ballots, proportional representation, mandatory voting, and online voting — are fully and fairly studied and considered," he promised.

Exactly what he'll pick was not specified — only that he'd do whatever he does within 18 months of being elected.

First, he'll need to win. The polls, of course, could swing in his favour again, just as quickly as they swung toward Mulcair. Or maybe the great middle class isn't clamouring for change, after all.

But time is running short for any one of the parties to come up with a winning strategy.