'Been there; done that; didn't work,' say Texas crime-fighters 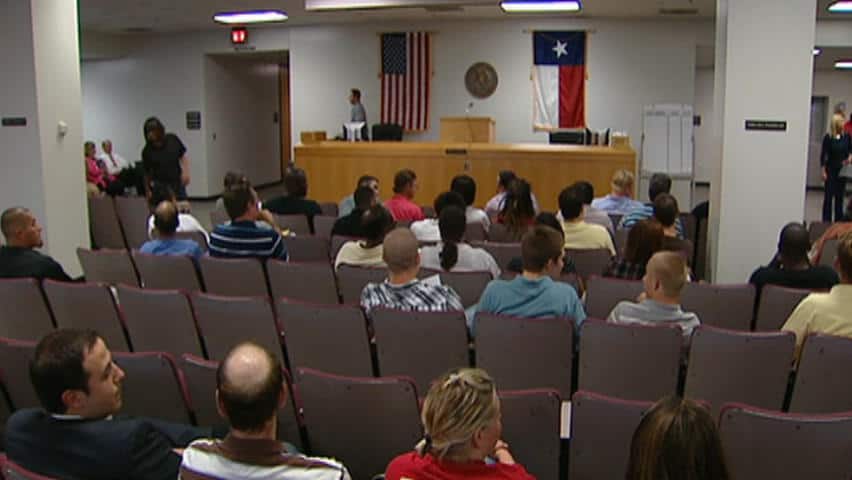 9 years agoVideo
13:27
Terry Milewski discovers the Canadian government's crime policies - including the building of more prisons - are getting poor marks in Texas 13:27

Adds Representative Jerry Madden, a conservative Republican who heads the Texas House Committee on Corrections, "It's a very expensive thing to build new prisons and, if you build 'em, I guarantee you they will come. They'll be filled, OK? Because people will send them there.

"But, if you don't build 'em, they will come up with very creative things to do that keep the community safe and yet still do the incarceration necessary."

These comments are in line with a coalition of experts in Washington, D.C., who attacked the Harper government's omnibus crime package, Bill C-10, in a statement Monday.

"If passed, C-10 will take Canadian justice policies 180 degrees in the wrong direction, and Canadian citizens will bear the costs."

A state with a record

On a recent trip to Texas, an array of conservative voices told CBC News that Texas tried what Canada plans to do – and it failed.

Should Canada rethink its stance on crime? Take our survey.

As recently as 2004, Texas had the highest incarceration rate in the world, with fully one in 20 of its adult residents behind bars, on parole or on probation. The Lone Star state still has the death penalty, with more than 300 prisoners on death row today. But for three decades, as crime rates fell all over the U.S., the rate in Texas fell at only half the national average.

That didn't change the policy — but its cost did.

Faced with a budget crisis in 2005, the Texas statehouse was handed an estimate of $2 billion to build new prisons for a predicted influx of new prisoners.

They told Madden to find a way out. He and his committee dug into the facts. Did all those new prisoners really need to go to jail? And did all of those already behind bars really need to be there?

Madden's answer was, no. He found that Texas had diverted money from treatment and probation services to building prisons. But sending people to prison was costing 10 times as much as putting them on probation, on parole, or in treatment.

"It was kinda silly, what we were doing," says Madden. Then, he discovered that drug treatment wasn't just cheaper — it cut crime much more effectively than prison.

His colleagues agreed. Texas just said no to the new prisons.

Instead, over the next few years, it spent a fraction of the $2 billion those prisons would have cost — about $300 million — to beef up drug treatment programs, mental health centres, probation services and community supervision for prisoners out on parole.

It worked. Costs fell and crime fell, too. Now, word of the Canadian government's crime plan is filtering down to Texas and it's getting bad reviews.

Marc Levin, a lawyer with an anti-tax group called Right on Crime, argues that building more prisons is a waste of taxpayers' money.

"We've see a double-digit decline in the last few years in Texas, both in our prison incarceration rate and, most importantly in our crime rate," says Levin.

"And the way we've done it is by strengthening some of the alternatives to prison."

The statistics bear him out. According to the Texas Department of Corrections, the rate of incarceration fell 9 per cent between 2005 and 2010. In the same period, according to the FBI, the crime rate in Texas fell by 12.8 per cent.

By contrast, Levin says, the Canadian government has increased the prison budget sharply, even though crime in Canada is down to its lowest level since 1973.

The Harper government has already increased prison sentences by scrapping the two-for-one credit for time served waiting for trial. Bill C-10 would add new and longer sentences for drug offences, increase mandatory minimums and cut the use of conditional sentences such as house arrest.

In each case, Texas is doing the opposite.

So are several other states — egged on by a group of hardline conservatives who have joined the Right on Crime movement. These include Florida Gov. Jeb Bush, former Speaker Newt Gingrich, the tax-fighter Grover Norquist and the former attorney general for President Ronald Reagan, Ed Meese.

That's not a list of liberals. Marc Levin says Canada is out of step with the best conservative thinking south of the border.

"We've seen in the United States, states and conservative leaders moving in a much different direction than the Conservative Party is saying in Canada," he says.

"I think the conservative thing to do is to be cost-effective and to hold offenders accountable. And, frankly, for many of them, they go to prison, they don't pay child support, they don't have to work in the private sector, they don't pay restitution — I don't believe that's holding people accountable."

What Levin means by accountability is what happens at Judge John Creuzot's drug court in Dallas.

Thieves, drug addicts and drunk drivers must file into Creuzot's courtroom each week as a condition of their sentences. They're on probation with the threat of prison hanging over them. They must prove they are keeping up with their drug treatment.

Creuzot cajoles, threatens and lectures them to stick with the program — but he also rewards them when they succeed. If they graduate from treatment, clean and sober, he holds an awards ceremony in his courtroom. Then, he gives them a big, back-slapping Texas hug.

Hugs? From a judge in the state that gave us chain gangs?

It's not your father's Texas. But Creuzot isn't all hugs. He renders a blunt verdict when he is asked what's wrong with the Harper government's plan to get criminals off Canadian streets.

"Nothing, if you don't mind spending a lot of money locking people up and seeing your crime rate go up! Nothing wrong with it at all!"

Creuzot says prison just doesn't work as well as the less expensive methods he uses — because, one way or another, drugs and alcohol lie at the root of 80 per cent of crimes.

"What we've learned," he says, "is that if you deal with those underlying issues with the proper assessments up front, doing that before you make a sentencing decision … and you fund programs that will deal with that on a long-term basis, that you avoid sending thousands of people to prison."

But isn't all the treatment expensive?

"It's less expensive!" Creuzot snaps. "We had a university do a cost-benefit analysis. And every dollar we spend is worth $9 and 34 cents in avoided criminal justice costs."

Other studies in Texas agree that treatment and probation services cost about one-tenth of what it costs to build and run prisons. Besides that, offenders emerge much less likely to commit fresh crimes than those with similar records who go to prison.

At Phoenix House, a drug treatment centre in Wilmer, just south of Dallas, Dr. Teresa May-Williams is a forensic psychologist, paid to assess the risk of letting offenders out on parole or in treatment. She's found that prison is even riskier.

"We can't ignore the fact that our ‘tough on crime' stance that puts a person in prison and assumes that their drug problem will somehow magically disappear while they're incarcerated and they'll never get out again and offend, is ridiculous!" she says.

May-Williams says most offenders with drug or alcohol problems quickly resume their criminal lifestyle when they get out of prison.

"The data showed that 60 per cent of those individuals will be out and committing a new crime in, on average, about 11 months."

That's four times the rate of those who go through her six-month program instead.

"A big focus of it is getting their drug problem under control," she says, "and then beginning to work on education, job training, getting them employed, getting them focused on becoming a tax payer rather than a tax user. The recidivism rate for probation, the same kind of offender, is somewhere around 15-16 per cent."

Equally striking is that even the hardest cases can respond to court-ordered treatment.

Kathryn Griffin, by her own account, was a "hopeless" case.

Loquacious, loud and candid, Griffin had six felonies on her record — for drug possession and prostitution — so she was facing 35 years to life in jail when she came to court in Houston, yet again.

And she's stayed clean for eight years — because, she says, she was a "guinea pig" in what was, back then, a new experiment: drug court.

The judge gave her a choice: get clean in drug treatment or flunk out — and die in prison.

She made it. Now, she has a job counselling street prostitutes, pays taxes and tells anyone who will listen that Texas, too, has changed its ways.

"What I like about this state and our government is they are willing to listen, look, study, learn and see results."

Left, right and middle-of-the-road Texans are recommending that Canada do the same — and the conservatives most of all.