Prime Minister Justin Trudeau and his cabinet have again approved the Trans Mountain expansion project, a crucial next step for the much-delayed pipeline project designed to carry nearly a million barrels of oil from Alberta’s oilpatch to the B.C. coast.

Federal officials say construction of the $7.4 billion pipeline is likely to begin in 2019

Prime Minister Justin Trudeau and his cabinet have again approved the Trans Mountain expansion project, a crucial next step for the much-delayed pipeline project designed to carry nearly a million barrels of oil from Alberta's oilpatch to the B.C. coast each day.

The cabinet has affirmed the National Energy Board's conclusion that, while the pipeline has the potential to damage the environment and marine life, it's in the national interest and could contribute tens of billions of dollars to government coffers and create and sustain thousands of jobs.

Beyond approving the project, Trudeau also committed to directing every single dollar the federal government earns from the pipeline — which, when it's built, is estimated to be some $500 million a year in federal corporate tax revenue alone — to investments in unspecified clean energy projects.

Any proceeds from the eventual sale of the pipeline will also be earmarked for projects that would help with the transition away from fossil fuels to cleaner sources of energy.

"We need to create wealth today so we can invest in the future. We need resources to invest in Canadians so they can take advantage of the opportunities generated by a rapidly changing economy, here at home and around the world," Trudeau said.

Trudeau said building the project, which will help deliver Canadian oil to tidewater for shipment to lucrative markets in Asia, will ensure Canada is not dependent on selling its natural resources to one customer — the United States. 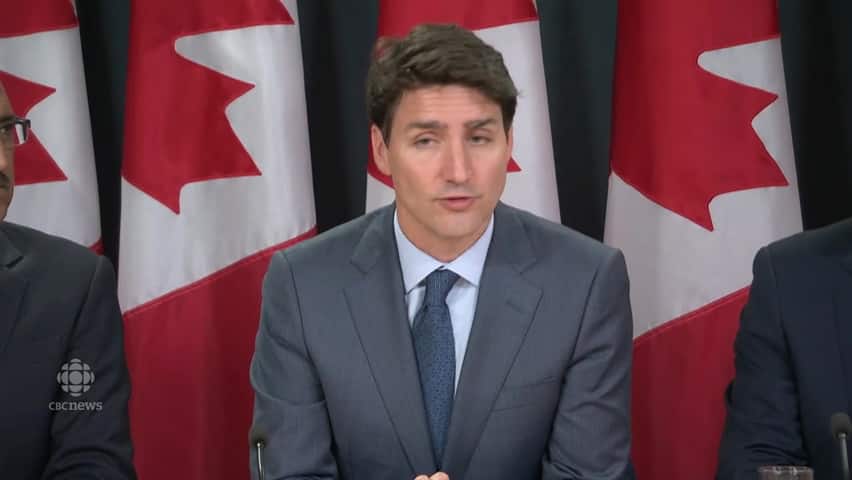 2 years agoVideo
44:58
Prime Minister Justin Trudeau announces his government will approve the Trans Mountain pipeline and then takes questions from the media. 44:58

"As we've seen over the past few years, anything can happen with our neighbours to the south," Trudeau said. "Right now, we're prisoners to the American market."

The federal Liberal government said Tuesday it will soon begin the process of meeting with Indigenous groups who are interested in buying the project and it is open to selling as much as 100 per cent of its stake to First Nations, Métis and Inuit investors. Ottawa has said it does not want to own the project long-term.

Work could start this year

A senior government official, speaking on background to reporters ahead of the official announcement, said while there are still a number of permits and regulatory hurdles facing the controversial project, the government expects construction work to start sometime this year.

"There's six months left in 2019 and I think it's fair to say shovels will be in the ground in 2019," the official said. "Plans are being drafted up, regulators are ready to move forward."

"We need to get a fair price for our country's energy to create good jobs and pay for public services. Approval is not construction. So now let's get it built!" Kenney tweeted.

Citing research from the Parliamentary Budget Officer, the Canadian Energy Pipeline Association said that every year of construction delay reduces the value of the project by some $693 million.

"This decision has been a long time coming," said Chris Bloomer, president and CEO of the pipeline advocacy group. "Further delay will only add to the opportunities Canada is losing out on every day due to the lack of market access for responsibly-produced Canadian products."

Despite expending considerable financial and political capital on the project, Conservative Leader Andrew Scheer said he doesn't trust Trudeau to see this energy infrastructure project through to completion, given it was this Liberal government that cancelled the now-defunct Northern Gateway project through northern B.C.

"I doubt his sincerity because he hasn't actually done anything. Show me the pipeline. I don't believe he actually wants it built. He doesn't support our energy sector ... he failed to tell Canadians on what day construction would actually start," Scheer said. 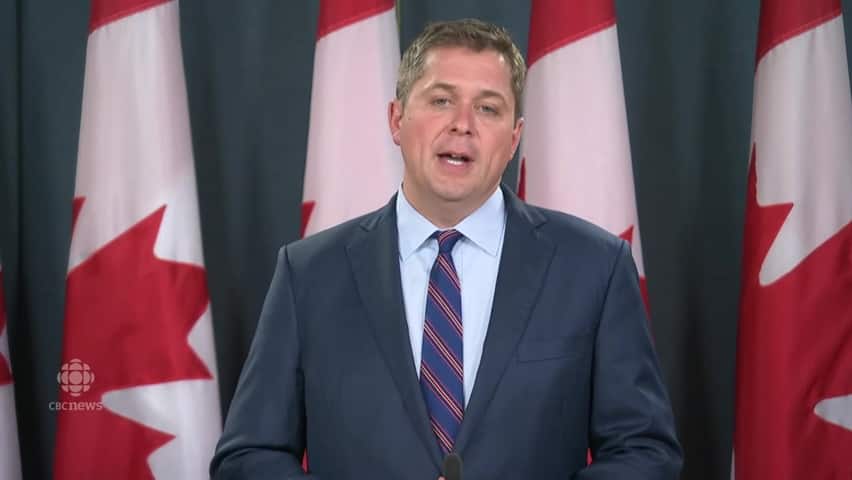 'I doubt his sincerity because he hasn't actually done anything'

NDP Leader Jagmeet Singh added his voice to the chorus of opposition, saying it's irresponsible for the government to build a crude oil pipeline while also vowing to meet Canada's Paris emissions reduction targets, which demand Canada lower emissions by some 30 per cent from 2005 levels by 2030.

The Liberal government maintains the 100 megatonnes cap on emissions from Alberta's oilsands will limit future development and help Canada keep its Paris promise.

Green Party Leader Elizabeth May said the plan to invest profits from Trans Mountain into clean technology is a "cynical bait-and-switch that would fool no one."

"If you're serious about fighting climate change, you invest public funds in renewable energy. You don't invest them in a bitumen pipeline," she said. "And there's no guarantee that this pipeline will ever turn a profit anyway." 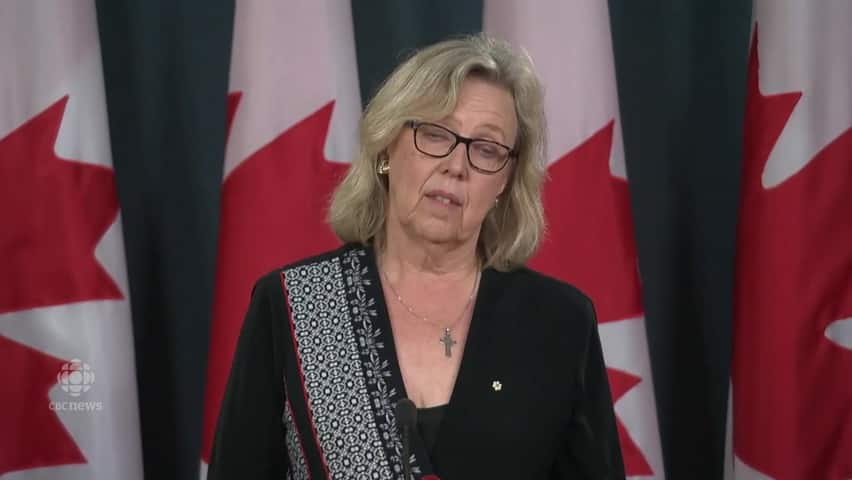 2 years agoVideo
8:15
Singh and May both express their disappointment with the Liberal government for his decision to approve the Trans Mountain pipeline. 8:15

The decision comes more than two years after cabinet last approved the project — a decision that was nullified by the Federal Court of Appeal last summer, with judges citing inadequate Indigenous consultations and an incomplete environmental review process.

The court decision placed the federal government in the awkward position of being both the owner of the project — it bought it for $4.5 billion amid investor uncertainty — and the entity tasked with approving construction permits. 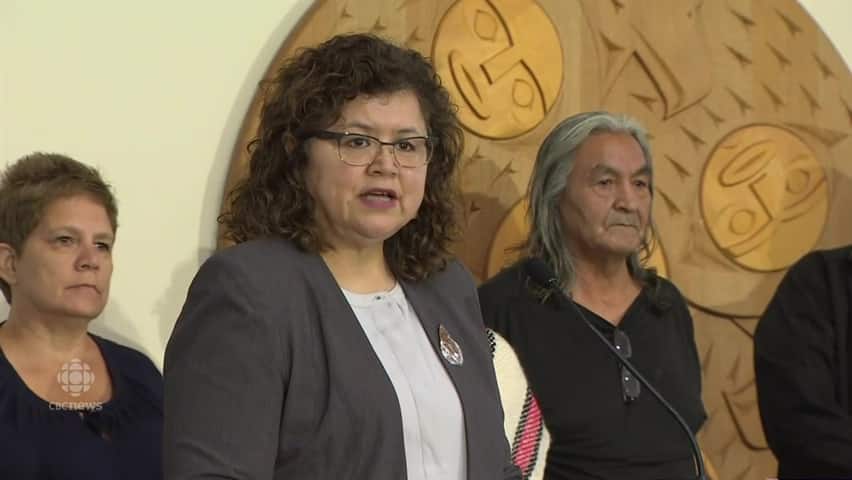 2 years agoVideo
0:49
Chief Leah George-Wilson of the Tsleil-Waututh First Nation says she is disappointed with the approval of the Trans Mountain pipeline and will be appealing the decision. 0:49

That shock decision forced the government and its Crown consultation teams back to the table with Indigenous communities along the project's route. While the vast majority of First Nations communities have accepted the project and signed impact benefit agreements with the proponent — now a Crown-owned entity — some have flagged potentially devastating effects of a spill on their traditional lands or in their waters as a risk factor demanding more accommodations.

Other First Nations, notably those in B.C.'s lower mainland, have called for the project to be killed outright.

The government tasked retired Supreme Court justice Frank Iacobucci with leading the team of 60 consultants who fanned out across Alberta and B.C. to meet with First Nations and Métis communities to document concerns and put forward recommendations — beyond the 156 conditions already proposed by the NEB — that could mitigate the effects of this project.

While the final outcome was essentially a foregone conclusion, the strings cabinet would attach to its conditional approval of the project were unknown.

The cabinet accepted all of the 156 conditions and took, according to officials, the "unprecedented step" of actually amending six of those NEB conditions to "make them stronger and better," including strengthened marine and emergency response plans with far more Indigenous participation.

The positive cabinet decision is far from the last hurdle facing the project, first pitched by its former proponent Kinder Morgan in 2014. Now, the Crown corporation, accountable to Parliament through the Canada Development Investment Corporation, will have to work with the NEB to finalize the project's route through a series of regulatory hearings.

The possibility of further litigation from environmentalists and First Nations is always a risk.

Unsatisfied with the government's promised fixes, Chief Leah George-Wilson of the Vancouver-area Tsleil-Waututh First Nation said her community would turn again to the courts to try to block the project.

"The federal government's decision to buy the pipeline and become the owner makes it impossible to make an unbiased, open-minded decision," George-Wilson said. "After consultation with our community and our council, we will be appealing this decision to the Federal Court of Appeal."

There are are also competing Indigenous-owned entities clamouring to buy the project from Ottawa, with some floating a purchase price beyond what the federal Liberal government paid to the Texas energy infrastructure giant in the first place.

Environmental groups attacked the decision to proceed with the project. Patrick McCully, energy program director at the Rainforest Action Network, said it was "stunningly hypocritical" for the government to put forward a motion in the House of Commons declaring climate change a national emergency on Monday only to approve a major project like Trans Mountain on Tuesday.

"This is like declaring war on cancer and then announcing a campaign to promote smoking," McCully said. "But this is far from a done deal. First Nations and Canadian environmentalists will continue to fight this project and their international allies will support them in whatever way they can."

"The federal government has signed off on as much as an additional 15 million tonnes of carbon. This is irresponsible at a time when Canada is drifting further away from meeting our Paris climate commitment, and inconsistent with the climate emergency that was declared only yesterday," added Tim Gray, the executive director of Environmental Defence.

The pipeline company has already secured some 30 per cent of the needed pipeline materials to start work on some segments of the pipeline.

If built, the 1,150-kilometre expansion project would nearly triple the existing pipeline's capacity to 890,000 barrels a day.