First Nations chiefs and leaders who say they represent over 200 Indigenous communities in B.C. and Alberta are fighting back against the federal government's plan to ban all oil tanker traffic off the coast of northern B.C. — calling it an "attack" on the energy industry that will leave remote First Nations destitute.

First Nations chiefs and leaders who say they represent over 200 Indigenous communities in B.C. and Alberta are fighting back against the federal government's plan to ban all oil tanker traffic off the coast of northern B.C., calling it an "attack" on the energy industry that will impoverish remote First Nations.

Chief Roy Jones Jr. of the National Coalition of Chiefs, a group that supports energy projects as a solution to rampant poverty on First Nations reserves, said the federal Liberal government is "arbitrarily denying Indigenous communities ... investments" by curtailing development through the northern reaches of the province.

"We're trying to lessen our dependency on federal [welfare] dollars. Bill C-48 will just set us back," Jones said.

Calvin Helin, a member of the Lax Kw'alaams First Nation near Prince Rupert, B.C. and an executive with the Eagle Spirit pipeline project, said "elites" from Central Canada are ignoring the pleas of pro-pipeline Indigenous communities who see this sort of development as a solution to unemployment rates as high as 80 per cent, and living standards on a par with sub-Saharan Africa. 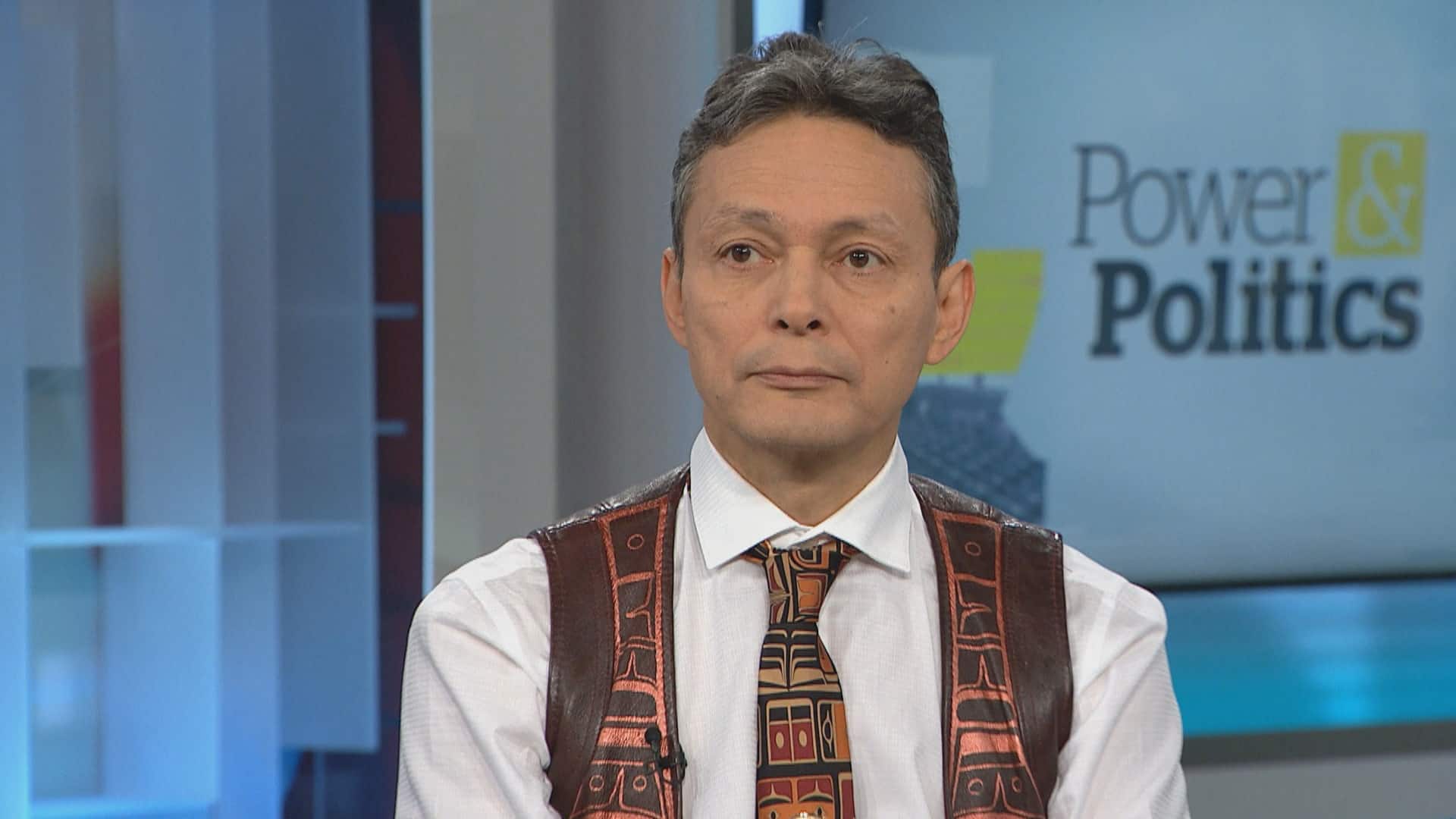 2 years ago
6:03
The Eagle Spirit Energy chairman discusses the impact C-48 would have on his proposed pipeline project. 6:03

"There's no question the energy industry will be completely savaged," Helin said. "Canada has become the laughing stock of the energy world."

Helin said Ottawa brought about this proposed oil tanker ban in part because it is kowtowing to self-described anti-pipeline "leaders" who are "on the payroll of environmental groups."

"Unfortunately, because there's literally no employment in our community, that's how some people remain employed," Helin said, referring to individuals he claims are falsely presenting themselves as First Nations leaders to politicians and the media to advocate against natural resources development.

Helin said the Nine Tribes of Lax Kw'alaams has sent a cease-and-desist letter to Gary Reece, a former community leader who claims to be a hereditary chief, to stop presenting himself as the voice of the Lax Kw'alaams on energy issues.

Helin accused Reece and others like him of being "absolutely" influenced by U.S.-based environmentalist organizations that are bankrolling anti-oil campaigns, calling them "puppets and props" for the green lobby.

Reece met with senators last week urging them to pass Bill C-48, the legislation that will prohibit tankers carrying crude oil from loading or unloading at ports in northern B.C.

"The chiefs feel that there is foreign interference in their traditional territories, territories they know better than anybody else," Helin said.

Marilyn Slett is the chief of the Heiltsuk Nation and, with Reese, a member of the delegation that travelled to Ottawa last week to talk with senators. She told CBC News Tuesday that her group, Coastal First Nations, does receive funding from environmental groups but it's just one of a "multitude" of funding sources they rely on to carry out their advocacy work.

Slett said the financial support doesn't mean her First Nations coalition is beholden to environmentalists or "one-sided," as Helin suggested.

"Our agenda is not just the green agenda. Our agenda has always been the stewardship of our territories and the protection of whatever we have here, and we do it in a sustainable way," Slett said. "Our concern about tanker traffic goes back to the 1970s. We've been facing these same questions for decades."

The bill in question would ban tankers capable of carrying more than 12,500 metric tons of oil from an area that stretches from the northern tip of Vancouver Island to the Alaska border. The legislation formalizes a similar, voluntary ban that has been in place in the region for the last 20 years.

The bill would block Helin's quest to build Eagle Spirit, a $16-billion pipeline project to carry medium and heavy crude from Fort McMurray to the Grassy Point port near Prince Rupert, B.C.

Helin has pitched the project as an alternative to the now-defunct Northern Gateway project — which was cancelled by Prime Minister Justin Trudeau and his cabinet — and the long-delayed Trans Mountain expansion project. Helin has the support of 35 First Nations in the area, including every chief along the proposed pipeline's route.

Tanker ban supporters say they worry that a spill of a crude oil product in coastal waters could threaten the viability of a diverse fishing industry that sustains well over 1,000 jobs in the area, from the fishermen themselves to processing plants along the region's shores.

However, the elected mayor of the Lax Kw'alaams Band — John Helin, the brother of Calvin — has filed a legal challenge against Canada and B.C., hoping to get a court to rule that the tanker moratorium infringes on Indigenous and treaty rights by blocking a plan to build an export port on their territory.

The band asserts it was not adequately consulted or accommodated by the federal government ahead of the introduction of Bill C-48 in Parliament.

Transport Minister Marc Garneau, who introduced the legislation in the Commons, has met with representatives from the Lax Kw'alaams Band.

"Since January 2016, our government has held close to 75 engagement sessions, bilateral and multilateral meetings with Indigenous groups, industry stakeholders and communities across Canada on the moratorium and improving marine safety," a spokesperson for the minister said.

"We are committed to ensuring that we protect this incredible environment that coastal and Indigenous communities call home, and ensure clean water for our kids and grandkids. At the same time, we remain fully committed to supporting our energy sector by expanding pipeline capacity to new markets."

The pro-pipeline group of chiefs said Tuesday they are prepared to file a formal complaint against Canada before the United Nations over an alleged breach of the UN Declaration on the Rights of Indigenous Peoples (UNDRIP), which asserts Indigenous groups have "the right to the lands, territories and resources which they have traditionally owned, occupied or otherwise used or acquired."

A competing group — the Allied Tribes of Lax Kw'alaams, which counts hereditary leaders among its members — also claims to represent the "true owners" of the land in question and said Helin and his allies have hijacked the original intent of UNDRIP.

"The federal oil tanker ban is in line with their stewardship obligations to protect the land and waters for future generations from oil spills," the group said.

The question of who can legitimately claim to speak for these northern, coastal First Nations on development issues has long been politically fraught.

The Federal Court of Appeal ruled on a similar matter earlier this year, siding with the elected Indigenous leaders over leaders who claim status because of family lineage or inherited titles as the legitimate representatives of their communities.

For example, in February 2018, the court dismissed a request for a judicial review from Donnie Wesley, a self-described hereditary tribal leader with the Lax Kw'alaams First Nation, on the Pacific NorthWest LNG project.

Justice Robert Barnes said Wesley had failed to prove that he is the head chief of the Gitwilgyoots tribe, one of nine allied tribes of the Lax Kw'alaams First Nation.

Supporters of Alberta's oilsands fear the ban, when combined with scarce pipeline capacity and cratering oil prices, could spell the end of one of the country's largest export industries. During her swing through Ottawa last week, Alberta Premier Rachel Notley said the bill should be tossed "into the dustbin."

Chief Isaac Laboucan-Avirom of the Woodland Cree First Nation in Alberta, which has considerable interests in the oilsands, said Tuesday the tanker ban would be "devastating."

"Without economic resources, we are all in jeopardy. So many jobs are being lost," he said.

Bill C-48 was passed by the House of Commons last spring. The bill passed the second reading legislative phase in the Senate Tuesday and will now be sent to committee for further study.

A number of senators have expressed fears that the bill would kill off an international shipping route for Canada's energy products at a time of constrained pipeline capacity.

"Without the Trans Mountain pipeline and with the tanker moratorium, there is absolutely no possibility for Alberta to get its product to tidewater. We will have closed the gate and made any alternative solution, if Trans Mountain fails, impossible," Conservative Alberta Sen. Scott Tannas said in a recent speech in the chamber.