Ottawa to hand over child welfare services to Indigenous governments

Indigenous Services Minister Jane Philpott said Friday that the federal government plans to hand over control of child welfare services to Indigenous governments, in an effort to drive down the massive number of Indigenous children in foster care.

It's a departure from how the current system works, which leaves most Indigenous kids housed in provincially governed child welfare systems that critics say are inattentive to their unique needs.

The Toronto-area minister said she expects the provinces and territories to cooperate with these changes because they have told her they recognize just how "dysfunctional" and "inadequate" the current system is when it comes to serving the needs of Indigenous kids.

Many fear the current system — which regularly seizes children from their families and communities and places them with foster parents — replicates the mistakes made by the Indian residential school system and through the 'Sixties Scoop', alienating kids from their traditional language, culture and support networks.

"For a century now, based on discriminatory policies of government, we've been taking children away from their families. It started with residential schools, it continued with the Sixties Scoop and, still today, children are being taken from their families," Philpott said Friday.

"This legislation marks a turning point to say 'No more.'"

The 'Sixties Scoop' refers to the practice in Canada for decades after the late 1950s of indiscriminately removing Indigenous kids from their homes and putting them in foster care or up for adoption. 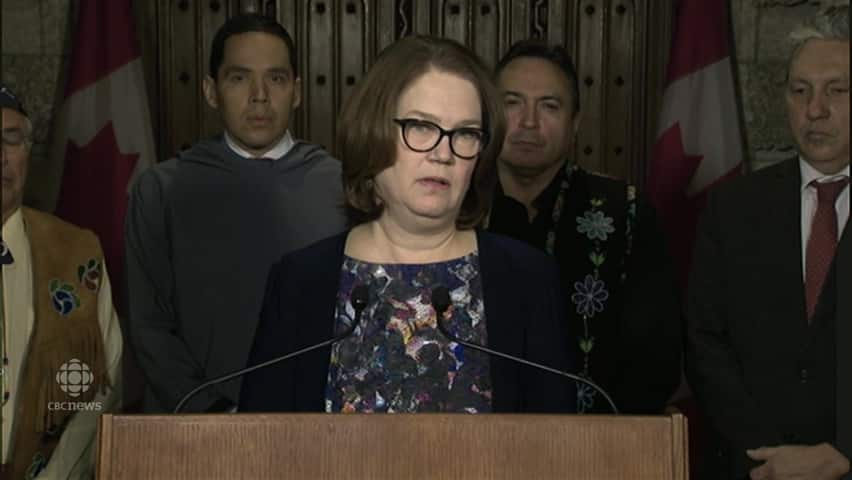 The specifics of how Ottawa will go about facilitating such a jurisdictional transfer were not fully explained on Friday.

The enabling legislation will be introduced in the House of Commons in early 2019, Philpott said. Indigenous leaders expressed hope that the bill would be passed before the federal election next fall.

Philpott said there is an "urgency" to the changes and she does not expect the opposition in the House of Commons or Senate to find the bill particularly controversial.

"Every day in this country, someone walks into a home or a hospital room where there's a First Nations, Inuit or Métis mother who has just given birth. And they take that child away," she said in an interview with CBC's Power & Politics following the announcement.

"It's going to stop. We know the dangerous path those children are on once they're entangled in the foster system."

"First Nations are ready to reform child and family services in ways that respect our rights, cultures and family structures. First Nations have been held back for years by outdated laws, and we continue to experience the trauma and loss when children and families are broken apart," Bellegarde said.

Philpott said Ottawa is already working to reduce the financial incentives for agencies to apprehend children, moving away from a funding model that was tied to the number of kids in care.

Philpott previously has vowed to end what she called a "perverse" system that turns Indigenous children into "commodities."

Legislation 'will ensure survival ... of our families': Métis leader

Alvin Fiddler is the grand chief of the Nishnawbe Aski Nation, a collection of First Nations in Northern Ontario. He also welcomed the promise of new legislation as a way to remove "uncertainty" around the current, problem-plagued child welfare system.

"Federal legislation on Indigenous child welfare has the potential to enshrine our right to care for our children in a way that is consistent with our cultural traditions and values ... (and) provide(s) a foundation for accountability, while honouring our inherent rights," he said.

Clément Chartier, the president of the Métis National Council, was even more effusive in his praise for the government's new pledge, saying the planned devolution "will ensure the survival, dignity and well-being of our families, communities and nation for generations to come."

Kinship care — placing children with family members, such as grandmothers — is another model Indigenous communities want to explore.

Ottawa's pledge to cede jurisdiction to Indigenous governments also satisfies some of the "calls to action" from the Truth and Reconciliation Commission, which conducted an exhaustive six-year study of the Indian residential school system and pitched policy fixes to avoid repeating some of the mistakes of the past.

This is just the latest example of the federal Liberal government pursuing a policy of devolution to Indigenous nations in the name of self-governance.

Last fall, for example, Crown-Indigenous Relations Minister Carolyn Bennett negotiated a landmark deal on education with the Anishinabek Nation in Ontario — something the government hopes to replicate in other jurisdictions.