Freeland has 'constructive meeting' with U.S. as Canada faces pressure to sign or face auto tariffs

"It was a very constructive meeting with Ambassador [Robert] Lighthizer and his team and we'll be back again tomorrow," Freeland told reporters Tuesday following her first negotiating session at the U.S. Trade Representative office in months.

"What has really paved the way for what Canada believes will be a good week is the fact that Mexico has made some significant concessions, particularly in the area of labour and of rules of origin on cars," she added.

The trip by high-level Canadian officials comes as pressure mounts to sign a deal with the U.S., by far this country's largest and most important trading partner.

Freeland, who cut a European trip short to fly to Washington to try and hammer out a trilateral deal, said Mexico's compromises clear the way for "productive" talks this week.

In his first comments since the U.S. and Mexico put pen to paper on a draft trade deal, Trudeau said he is "encouraged" by the progress Canada's NAFTA partners have made on writing a renewed trade deal.

"We have been encouraged by the progress made by our NAFTA partners over the past weeks. This is an important step to moving forward on renegotiating and improving NAFTA," he said during a brief news conference in Longueuil, Que. Tuesday. 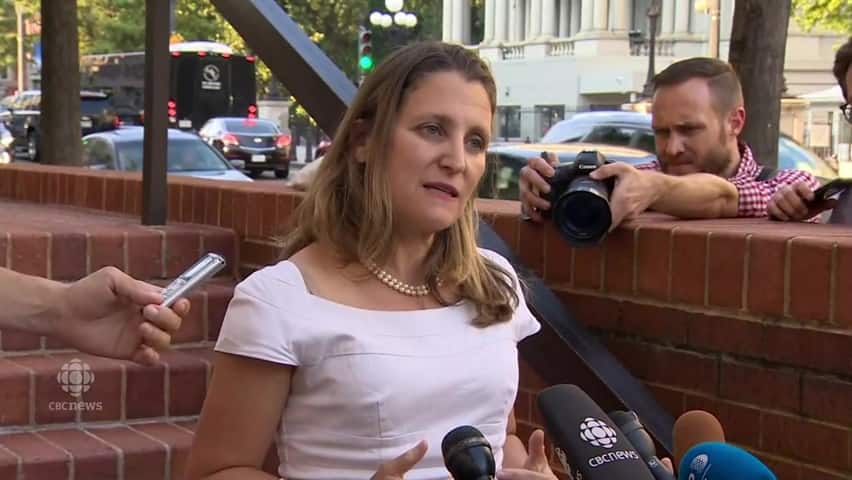 Freeland holds "Constructive" talks with the US Trade Representative

2 years ago
1:22
Foreign Affairs Minister Chrystia Freeland spoke to reporters after meeting with the US Trade Rep Tuesday in Washington 1:22

Trudeau said Canada's negotiation team is busy poring over the details of a draft bilateral agreement in principle announced by the U.S. and Mexico on Monday.

"The team in Washington is digging into the progress made and looking at what the next steps are. We will engage in a positive and constructive way as we always have been and look forward to ultimately signing a deal as long as its good for Canada and good for middle class Canadians," the prime minister said.

When asked if Trudeau would continue to defend Canada's system of supply management for some farm sectors — in the face of entrenched and vocal opposition from U.S. President Donald Trump — Trudeau said Canada's position on that issue has not changed. "We will defend supply management," he said.

There's a word that Canada has trouble with and it's M-I-L-K . Milk. Anything to do with milk and dairy  ... they're going to have to fix that.- Larry Kudlow , Trump's chief economic adviser

Mexico prepared to go it alone

While the U.S. and Mexico had been expected to work through existing bilateral issues between the two countries over the summer, they also negotiated some aspects of the deal that are considered trilateral — without Canada at the table.

U.S. and Mexico have signalled they'd like to see a deal by week's end to ensure an agreement can swiftly be sent to Congress for its mandatory 90-day review. The incoming Mexican administration will take office on Dec. 1, meaning a timeline is becoming increasingly constrained.

Canada will now be cajoled to sign a deal quickly — largely concluded without our negotiators at the table for pressing trilateral-issues — or face damaging U.S. tariffs on Canadian-made vehicles that could cripple the domestic auto industry.

However, speaking to reporters outside the U.S. Trade Representative (USTR) office in Washington, Freeland said Mexico's "difficult" concession on labour issues around autos is a welcome development for Canada.

Details from the USTR show the preliminary agreements include a wage provision that 40 to 45 per cent of auto content would be made by workers earning at least $16 US an hour, and increase the North American auto content required from the NAFTA region to 75 per cent of an automobile, up from the current 62.5 per cent. 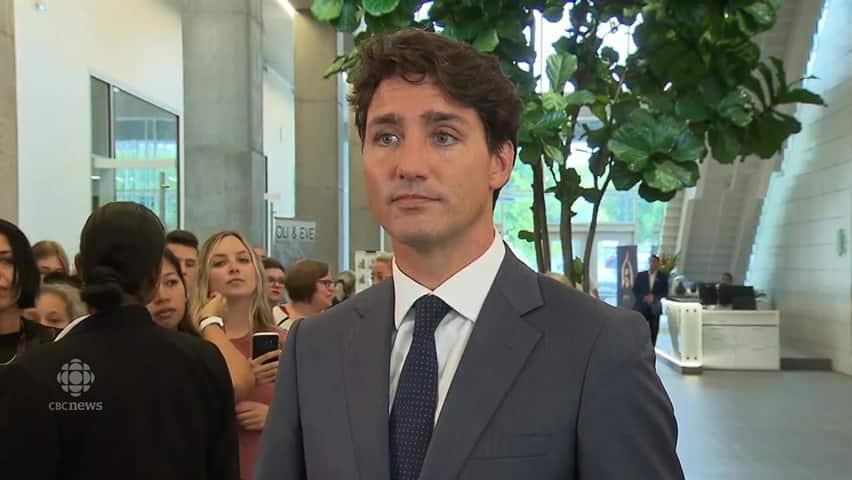 2 years ago
1:23
Prime Minister Justin Trudeau spoke to reporters in Montreal on Tuesday 1:23

Meanwhile, after securing a preliminary deal of its own with the U.S., Mexico's ambassador to Canada said his country is prepared to go it alone with the Americans if Canada and the U.S. are not able to resolve some lingering bilateral issues, namely the extension of intellectual property (IP) rights and a dispute settlement mechanism. 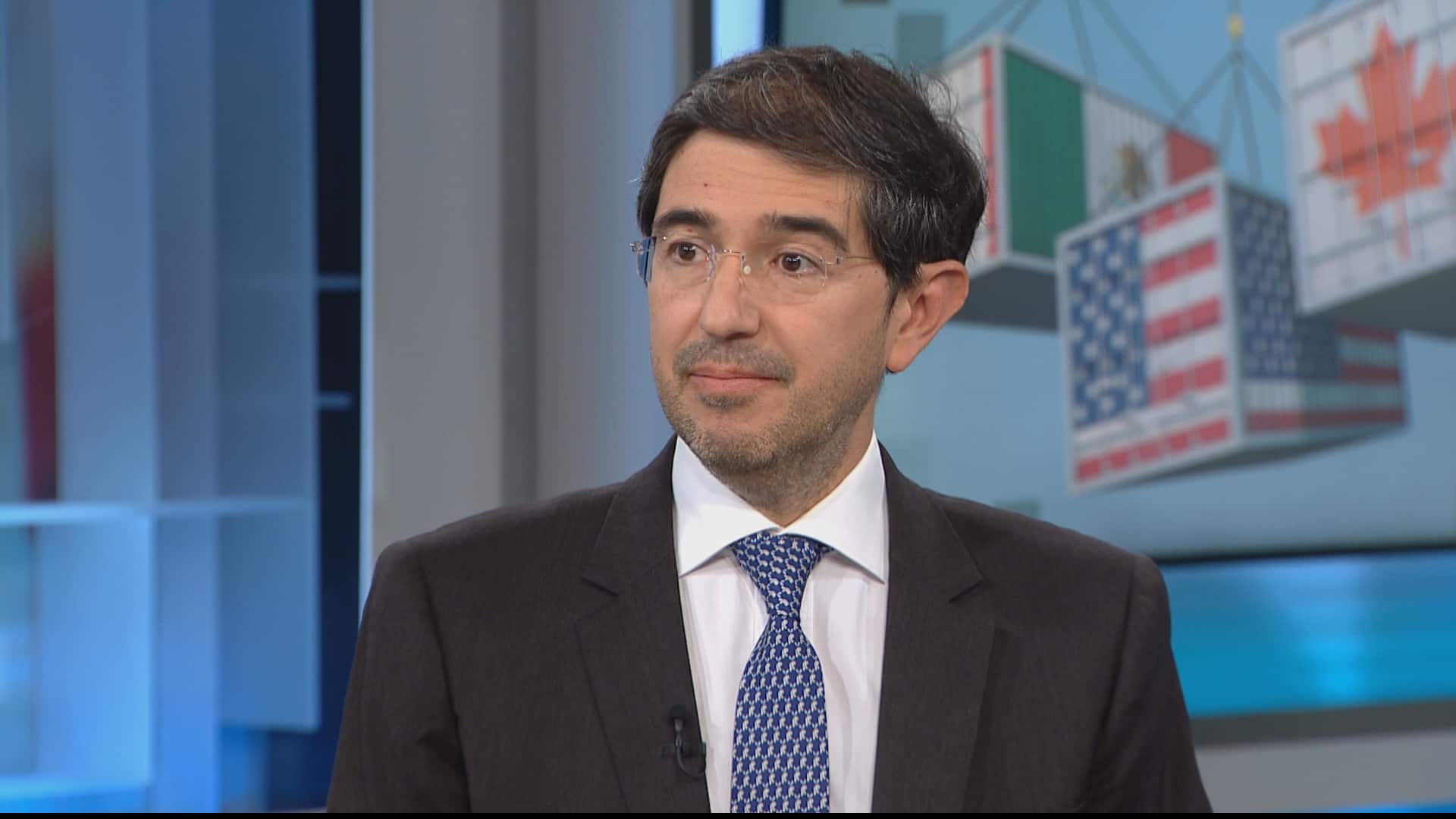 'We would be ready to move forward'

2 years ago
8:31
Mexican Ambassador to Canada Dionisio Perez Jacome tells Power & Politics that Mexico will do everything it can to have Canada included in NAFTA negotiations, but if Canada and the U.S. can't overcome their bilateral issues, Mexico is prepared to move forward without Canada. 8:31

"They are not within our control. We will try to help as much as we can so that these are resolved. We hope that they are resolved so that Canada can be part. If that is not the case, we would be ready to move forward [without Canada]," Dionisio Pérez Jácome said in an interview with CBC's Power & Politics.

But, he said, that doesn't preclude Canada from joining the deal in the future.

Canadian sources, speaking on background to CBC News, said they need to see what exactly Mexico and the U.S. have agreed to in the preliminary, bilateral trade deal before they can "formulate an opinion" on Canada's negotiating position.

The same source said both the U.S. and Mexico are eager for a deal and thus there is a belief Canada can leverage that to negotiate one that is favourable for Canada.

The momentum is said to be "better than the momentum has been at any point in the negotiating process," a source said.

But, according to the source, Canada's pressing concern is how Chapter 19 of the original NAFTA — the dispute settlement mechanism that can be used to challenge anti-dumping and countervailing duty cases, like what has been used by Canada in past on the softwood lumber file — has been renegotiated by the two countries.

Chapter 19 has been a do-or-die issue for Canada as it is often relied on to fight punitive duties. The USTR's Bob Lighthizer, who is leading the U.S. negotiations, has long opposed this chapter as he believes it's in violation of U.S. sovereignty.

Sources with direct knowledge of the situation, and who spoke to CBC News on background, said Canada won't accept a deal without a strong dispute resolution system.

Freeland said Canada's position on the issue is well-known and discussions on resolving some of these substantive sticking points will begin in earnest tomorrow.

Larry Kudlow, U.S. President Donald Trump's top economic adviser, praised the "pro-growth" deal Trump signed with his Mexican counterpart while warning the U.S. will only accept a "good deal" with Canada that includes some major concessions, including with respect to Canada's system of supply management for some farm sectors.

"That good deal by the way has to include, among other things, intellectual property rights but also it's got to include the dairy farm stuff," Kudlow said in an interview with Fox News Tuesday.

"There's a word that Canada has trouble with and it's M-I-L-K. Milk. Anything to do with milk and dairy — they have this government-run, centrally planned system and some tariffs run upwards of 300 per cent. They're going to have to fix that," he said.

Thus, the negotiating teams will have to come to a resolution on a slew of sensitive bilateral issues between Canada and the U.S. before a deal can be signed.

Kudlow warned Trump has a large trade weapon in his arsenal if Canada balks at U.S. demands: massive tariffs on Canadian-made automobiles, which could make those vehicles prohibitively expensive to the average American consumer thereby endangering our domestic industry.

"The president did say if he cannot satisfactorily negotiate with [Canada] he may have to go to a large 20 to 25 per cent tax on Canadian automobiles headed for the U.S. That's part of his negotiating strategy. I would take him seriously, but let's hope Canada comes on board. Let's take him seriously," the former TV personality turned White House official said.

Trump has long called on Canada to dismantle the system of supply management, which allows specific commodity sectors — dairy, poultry and eggs — to limit the supply of their products to what Canadians are expected to consume in order to ensure predictable, stable prices.

That is then paired with the imposition of high tariffs on most foreign imports, a policy that makes these goods prohibitively expensive for Canadians, leaving domestic supply as virtually the only option for consumers.

Canada levies a tariff of up to 270 per cent on milk, 245 per cent on cheese and 298 per cent on butter in an effort to keep imports out and tightly control supply.

The U.S., in contrast, has largely maintained support for the farming sector through subsidies. So Americans foot the bill for farm supports indirectly, through the taxes they pay, while Canadians pay for those supports directly, through higher prices for supply managed products.