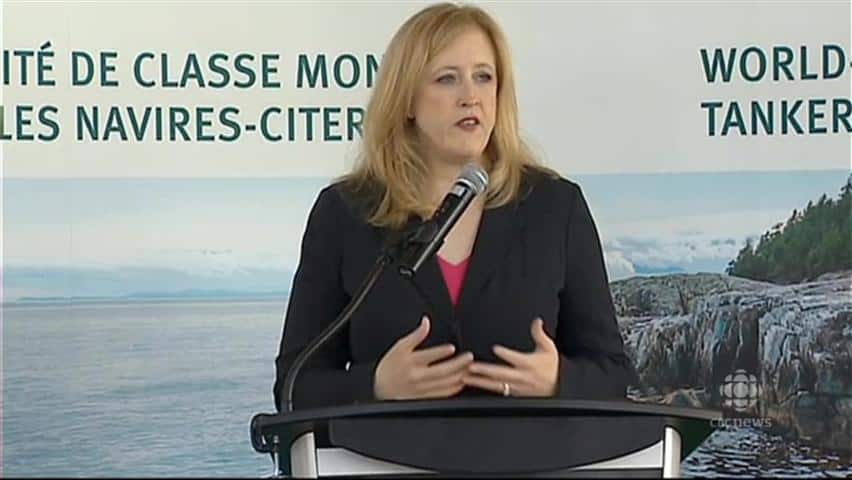 6 years ago
3:26
Federal Transport Minister Lisa Raitt lays out specific new rules for oil tankers, including new area-response planning and resources, research and technology, and a much higher liability cap for companies. 3:26

Speaking to a crowd in Saint John, Raitt said her government will instead raise the liability for a company that has an oil spill from the current $161 million per incident to $400 million per spill.

Once the ship owner's insurance and other funds are factored in, it would mean $1.6 billion would be available to cover compensation and cleanup.

If an oil spill cleanup costs more than that, the government would recover the costs from the company through a levy.

The new measures are in contrast to a main finding of a tanker safety expert panel that recommended last fall that "the oil cargo industry should be responsible for the full costs of spills … with no limit per incident."

The expert panel was appointed by the Harper government to recommend ways to strengthen marine safety and reassure the public.

The government is taking the advice of the expert panel on its other key recommendations.

This is the government's official response to the expert panel on tanker safety.

The panel's report was released last fall in B.C., where there is huge public opposition to the prospect of tankers carrying heavy crude down the environmentally sensitive coastline.

In contrast, Raitt's announcement was symbolically made in Saint John, where there is strong political support for an increase in oil export activity.

Saint John is the site of a future oil tanker terminal that's part of TransCanada's proposed Energy East pipeline. The Atlantic region is also seeing a boom in proposed Liquefied Natural Gas projects that would ship LNG to markets in Europe.

Aside from the lack of a cap on liability for companies, Raitt announced that Canada will put in place new regional planning and resources to better respond to accidents, based on local geography, in four areas:

Canada will also lift restrictive rules on what can be used to clean up spills, allowing emergency responders to use a wider range of technology.

There is also a commitment to help aboriginal communities buy equipment for marine emergencies and to partner with the Canadian Coast Guard.

A recent study prepared for the federal government suggested Canadians are increasingly wary of the environmental risks of shipping or exporting oil using any kind of infrastructure — pipelines, tankers or rail.​