Governor General David Johnston said the arrival of Syrian refugees is a 'defining moment' for Canada, during a forum at Rideau Hall on Tuesday with representatives of government, community organizations and the private sector.

"Nations achieve character in crises," he told the forum in his opening remarks. Canada's response to the refugee crisis is about "living up to who we are as Canadians."

"And it's even more than that. It's an opportunity," Johnson said, to reimagine how Canada takes care of its most marginalized and vulnerable and provides equality of opportunity.

"Great nations are built on great challenges," he said.

During the first panel discussion, Immigration Minister John McCallum admitted the government doesn't yet have all the answers on how best to bring the refugees into the country. He urged the business community to help refugees find housing and jobs.

The Governor General set three goals for the forum:

"This is a very critical situation for families in need, and Canada has a long tradition of responding to this kind of need," Johnston said during an interview on CBC News Network's Power & Politics Monday.

"Canada has functioned at its best when it goes back to its very fundamental values that make this country special: and they are: inclusivity, they are equality of opportunity, they are caring for others, they are seeing diversity as a strength, not a weakness."

Immigrants have come to Canada in the past because the country has welcomed them, not feared them, Johnston said.

"These are people who have gone through the most tragic circumstances you can imagine," he told Power & Politics guest host Hannah Thibedeau.

Johnston said he didn't think hosting the forum meant he was "stepping into the political realm."

"The office of the Governor General is here to connect, honour and inspire Canadians, and to encourage us to be a smarter, more caring nation," he said.

"What we're doing is bringing together people who have devoted their lives to this particular challenge, and helping them share their ideas with Canadians across the country, and encourage Canadians to ask what they can do to help." 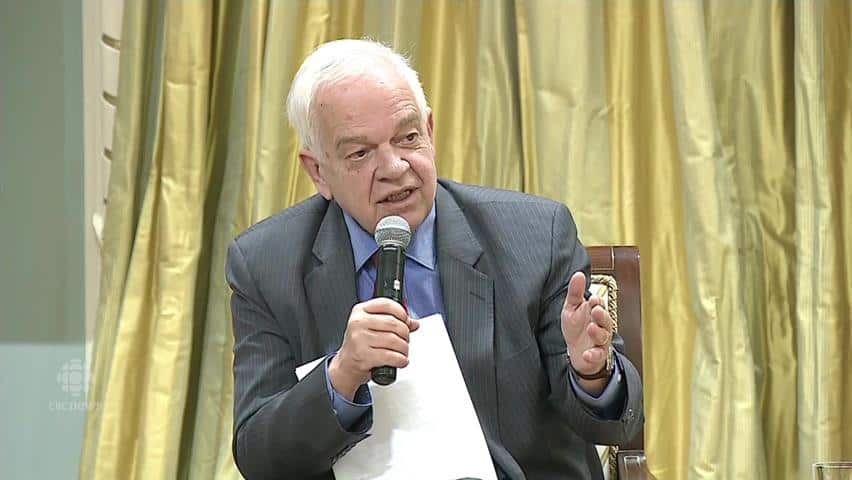 Immigration Minister John McCallum told a morning panel at the forum that he's concerned the current level of enthusiasm among Canadians for bringing in refugees will be lost if governments and aid organizations don't properly communicate.

To keep Canadians updated on how well refugees are being settled, McCallum said he and other federal officials will hold weekly briefings on the resettlement project, beginning Wednesday.

The minister also repeated his plea for private individuals and businesses to step forward and help with housing the refugees, and eventually helping them find jobs.