'Today it's heavy oil, tomorrow it could be anything else,' Justice Malcolm Rowe says at hearing 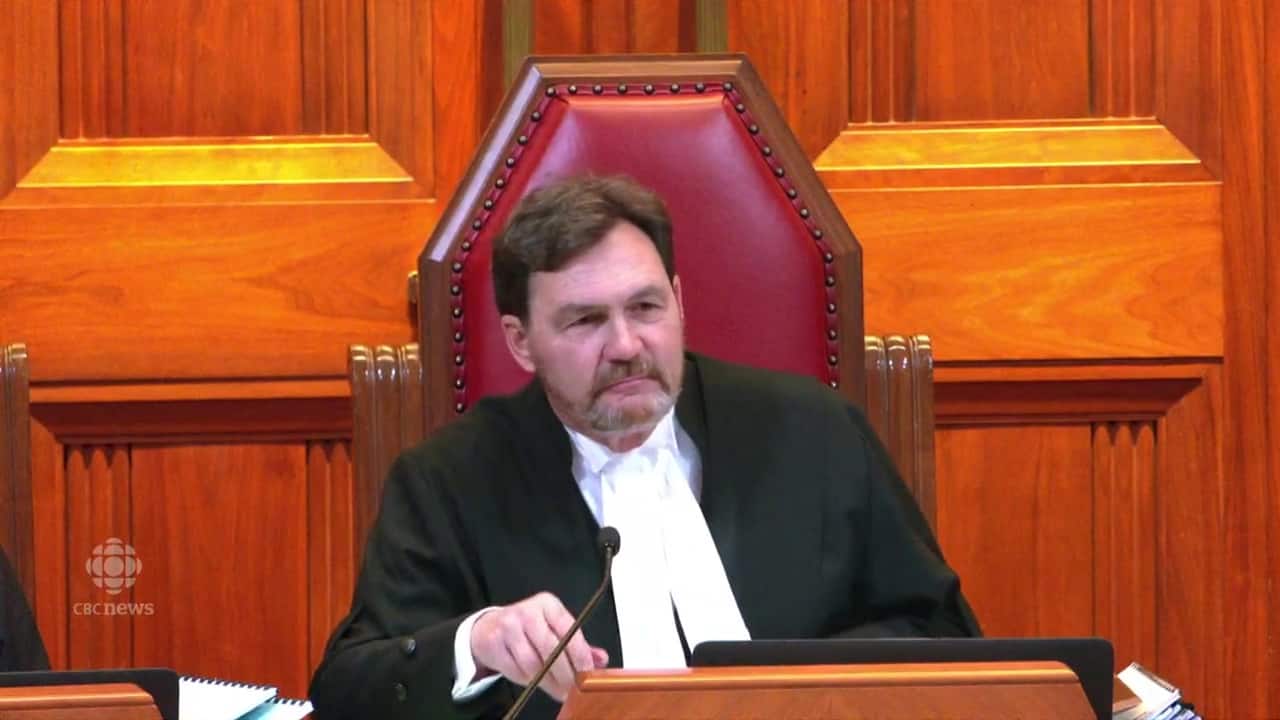 The Supreme Court of Canada has dismissed B.C.'s appeal of a lower court decision that quashed provincial legislation designed to block the Trans Mountain expansion project.

In a unanimous decision, Chief Justice Richard Wagner said the court will let the B.C. Court of Appeal decision stand.

The decision clears yet another legal hurdle for the long-delayed pipeline project. A separate Federal Court of Appeals case on the project, which considers Indigenous issues, is still pending.

The decision, issued from the bench on the same day legal counsel delivered oral arguments, is a blow to B.C. Premier John Horgan, who has sought to stop construction of the expansion. If built, the pipeline will carry nearly a million barrels of oil from Alberta's oilpatch to the B.C. coast each day for export to Asian markets.

Horgan promised in the 2017 election campaign "to use every tool in our tool box to stop" the construction of the Trans Mountain expansion.

The court's ruling was not unexpected, given how poorly the B.C. case fared in front of the justices Thursday.

The B.C. NDP government had drafted amendments to provincial environmental law to all but ban interprovincial shipments of heavy oil — bitumen and diluted bitumen — and other "hazardous substances" through pipelines, including the Crown-owned Trans Mountain expansion project.

The amendments would have required companies transporting these substances through B.C. to first obtain provincial permits.

In a statement, Horgan said he was disappointed by the decision, which effectively ends the province's litigation.

"This does not reduce our concerns regarding the potential of a catastrophic oil spill on our coast. When it comes to protecting our coast, our environment and our economy, we will continue do all we can within our jurisdiction," he said.

"This could not be a stronger affirmation of Alberta's position," he said. "I really believe 2020 is going to be a good year, a turnaround year, for Alberta."

Despite Horgan's 2017 promise to use all the provincial levers available to stop the project, Joseph Arvay, the lawyer representing the attorney general of B.C., insisted Thursday the proposed permits were not designed to target Trans Mountain.

He said the proposed law was designed rather to protect the environment by guarding against spills. However, the B.C. regime did not target bitumen transported by ship.

Bitumen is a molasses-like liquid or semi-solid form of petroleum. Environmentalists maintain diluted bitumen is difficult to clean up in the event of a spill on or near water.

Most of the justices — Malcolm Rowe, Rosalie Abella, Russell Brown, Andromache Karakatsanis and Nicholas Kasirer — questioned the province's authority to enact legislation on a matter that so clearly falls under federal jurisdiction.

The top court echoed many of arguments made by the five judges on the B.C. Court of Appeal, who ruled unanimously last spring that the Horgan government stepped into federal jurisdiction by imposing conditions on a project that crosses provincial boundaries.

Under section 92(10) of the Constitution, interprovincial projects like Trans Mountain are exclusively the purview of the federal government.

That section stipulates that "lines of Steam or other Ships, Railways, Roads, Telegraphs, and other Works and Undertakings connecting the Province with any other or others of the Provinces" are Ottawa's responsibility.

Rowe said B.C. is trying to block a project legitimately approved by the federal government.

"This [B.C.] legislation is about taking away the ability of the Government of Canada to effectively approve interprovincial pipelines that pass through B.C. carrying anything," Rowe said.

The pile-on by the justices over B.C.'s legal rationale was so intense that, by day's end, Arvay conceded the obvious: he likely wasn't going to win the appeal.

"If I'm not going to win the appeal, I don't want to lose badly," he said in his final reply.

'Today, it's heavy oil. Tomorrow, it could be anything else'

The Trans Mountain expansion project went through a years-long federal review by the National Energy Board (NEB) and the Canadian Environmental Assessment Agency (CEAA) and has been approved by the federal Liberal cabinet — twice.

Prime Minister Justin Trudeau has said the project is in the national interest and would help deliver Canadian oil to tidewater for shipment to lucrative markets in Asia, reducing price pressures on Alberta oil producers.

"If you have a pipeline and you can't put anything through it, it's totally useless. That frustrates the federal permitting process does it not?" Rowe said Thursday.

"Today, it's heavy oil. Tomorrow, it could be anything else."

Brown said B.C.'s law "effectively allows the province to regulate the design and operation of an interprovincial operation," a constitutional no-no given how explicit the document is on interprovincial matters.

Jan Brongers, the lawyer representing the Attorney General of Canada, asked the Supreme Court today to dismiss the B.C. appeal because the proposed environmental amendments are ultra vires, or beyond the province's jurisdiction.

Brongers said the federal government is also concerned about environmental protection and has its own regulations in place to guard against a potential spill. He said B.C. has overreached.

"Your point is the province is reaching into the federal toolbox because their toolbox doesn't do the job?" Brown asked Brongers.

"Yes. They're trying to regulate the same subject for the same purpose, but they have different notions for what's required," Brongers replied.

Justice Michael Moldaver described the B.C. bill as an attempt to "throw up barriers that will, at a minimum, delay or obstruct" a project approved by the federal cabinet.

Rowe said siding with B.C. in this case would be devastating to interprovincial commerce. "There will be nothing. The uncertainty will kill the business case," he said.

Brown, Karakatsanis and Rowe questioned the environmental protection argument because the legislation doesn't address the transport of heavy oils by other means — by ship, for example — or existing heavy oil shipments that move through the province.

Karakatsanis noted that the province already has environmental legislation — the Environmental Management Act — that can be applied in the event of a spill.

Abella said there's no question a province can enact environmental protection legislation, but the question before the court is whether this legislation protects the environment in a way that interferes with clear constitutional boundaries.

Arvay argued that the division of powers does not amount to "watertight compartments" — and courts previously have recognized that certain functions are best carried out by the level of government closest to the people affected.

"It is a core responsibility of the federal government to help get Canada's resources to market and support good, middle class jobs," he said in a media statement. "We know this is only possible when we earn public trust and work to address environmental, Indigenous peoples' and local concerns, which we are doing every step of the way on TMX."