People with grievous and "irremediable" medical conditions should have the right to ask a doctor to help them die, Canada's highest court says in a unanimous decision. 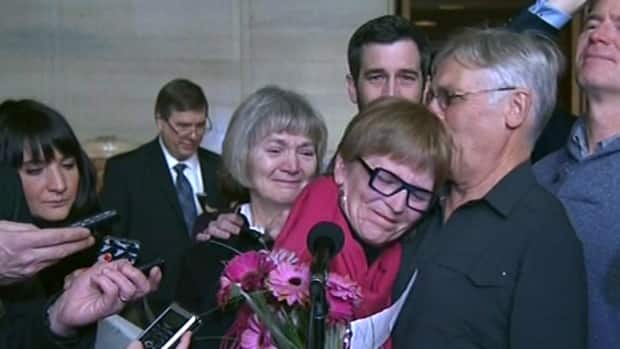 6 years ago
2:39
Voices supporting and opposing the Supreme Court ruling 2:39

People with grievous and irremediable medical conditions should have the right to ask a doctor to help them die, Canada's highest court says in a unanimous ruling.

The Supreme Court of Canada says a law that makes it illegal for anyone to help people end their own lives should be amended to allow doctors to help in specific situations.

The court has given federal and provincial governments 12 months to craft legislation to respond to the ruling; the ban on doctor-assisted suicide stands until then. If the government doesn't write a new law, the court's exemption for physicians will stand.

"It has very far-reaching implications so we intend to take the time to look at this decision carefully, thoughtfully," MacKay told reporters on his way out of the House.

But while the court has given Parliament a year to respond with a new law, the Hill will lose several months between the summer break, several weeks of election campaigning and the weeks it takes to prepare to return following an election.

When asked whether it's realistic to think this will be done before the next federal election, MacKay said it's "a consideration but not the primary consideration."

"The most important part of what Parliament will do is how we protect all Canadians' rights and interests in this particular case."​

'Impinges' on security of the person

The ruling is not limited to those with a physical disability who require a physician's assistance to end their lives.

All nine justices share the writing credit on the ruling, an unusual action meant to signal particular institutional weight behind the decision.

The one-year delay in implementing the ruling means the ban on doctors assisting in suicides remains in place until then.

Lee Carter and her husband, Hollis Johnson, said Kay Carter died happy, with a smile on her face because she died the way she wanted.

Asked about a woman with a physical disability who said she now feels pressure to end her life, Carter said she was sorry to hear that because the woman "has so much to live for."

"I want everybody in this country to live the life as they want to. But for those that ... don't want to continue, that have an incurable illness, [I'm glad] that they have a choice."

The court awarded full costs to the BCCLA and the other appellants, including Kay Carter's family. The Canadian government bears most of the cost and British Columbia, the province where the process started, bears 10 per cent of the trial costs, plus whatever else it cost the province to appear at the Court of Appeal and the Supreme Court.

The costs were awarded because the case was of such national importance.

In weighing the argument that the prohibition on doctor-assisted death breached the two women's rights, the court found the Charter right to life doesn't require an absolute prohibition on assistance in dying.

"This would create a 'duty to live,' rather than a 'right to life,' and would call into question the legality of any consent to the withdrawal or refusal of lifesaving or life-sustaining treatment," the court wrote in the decision.

​"An individual's choice about the end of her life is entitled to respect."

Doctors not forced to help

The court also found an individual's response to "a grievous and irremediable medical condition" is a matter critical to their dignity and autonomy. The law already allows palliative sedation, refusing artificial nutrition and hydration and refusing life-sustaining medical equipment.

"And, by leaving people ... to endure intolerable suffering, it impinges on their security of the person," the court wrote.

Doctors, however, are by no means compelled to help patients end their lives. The court leaves that up to the professional colleges that regulate medicine.

The court agreed with the B.C. trial judge that doctors are capable of assessing the competence of patients to consent, and found there is no evidence that the elderly or people with disabilities are vulnerable to accessing doctor-assisted dying.

The Supreme Court also agreed with the lower court that the safeguards work where they've been set up in jurisdictions that allow physician-assisted suicide.

While the ruling sets out specific criteria, it leaves some questions.

The decision is silent, for example, on whether depression or mental illness counts as a medical condition. The court does include psychological pain under the criteria of enduring and intolerable suffering.

Conservative MP Steven Fletcher, who became a quadriplegic after an accident in 1996, was at the court to react early to Friday's decision.

He has already introduced a private member's bill — which was also introduced in the Senate before Christmas — to make physician-assisted death legal under Canadian laws.

"That bill could be used as a foundation for parliamentarians going forward," he told reporters, although it's not scheduled to come up for debate any time soon and he concedes "those decisions are made at a higher pay grade than mine."

"I guess it depends ... if people want this to be an election issue or not," he said. "If it went to a free vote in Parliament, it would pass."

"There does need to be some Criminal Code provision, I think, to prevent abuse," he says. "I don't want people, because they have a bad hair day, to get their car mechanic to take them down."

"The vast majority of Canadians — 84 per cent — support physician-assisted death with appropriate caveats."