The Liberal government is extending the deadline for applications for the Summer Jobs program by one week, but it will not remove a controversial clause requiring applicants to sign an attestation on abortion and LGBT rights.

Applicants will still be required to sign attestation clause on abortion, LGBT rights

The Liberal government is extending the deadline for applications for the Canada Summer Jobs program by one week, but will not remove a controversial clause requiring applicants to sign an attestation on abortion and LGBT rights.

This week a group of religious leaders called the attestation form "fascist" and "pure discrimination," but Prime Minister Justin Trudeau staunchly defended it.

"This is a tremendous opportunity to give work experience to energetic, enthusiastic students, and to keep our economy growing. I invite all employers who haven't yet done so to apply today to get support to hire students this summer," she said.

There were similar extensions to the deadline in 2016 and 2017 as well, which saw a spike in applications.

The extension also gives MPs a chance to do a final push with not-for-profit organizations, faith-based groups and small businesses in their ridings.

But there will be no change on the requirement to sign the attestation, even if they include a written explanation for it.

"Groups that do not sign the attestation will not be considered for funding," Matt Pascuzzo, a spokesman for Hajdu, told CBC News.

Trudeau explained his thinking during a town hall meeting in Nanaimo, B.C. on Friday after a woman in the audience asked him to honour his father's legacy.

"Removing that offensive clause," the woman said, would be in line with the freedom of conscience and freedom of religion set out in the Charter of Rights and Freedoms, which Prime Minister Pierre Elliott Trudeau helped establish in 1982.

Trudeau answered that his father sometimes acted against his own interests or beliefs — for example, by liberalizing Canada's divorce laws — because he believed it was in the best interest of the country.

Trudeau recalled how his father apologized to him — after he and his mother broke up — for being unable to provide his sons with a mother figure because he, personally, didn't believe in divorce or remarriage.

"He moved forward with a piece of legislation that was fair and right for Canada, that his own personal faith didn't align with, or allow for on a personal level," the PM said.

Trudeau added he is trying to do something similar. 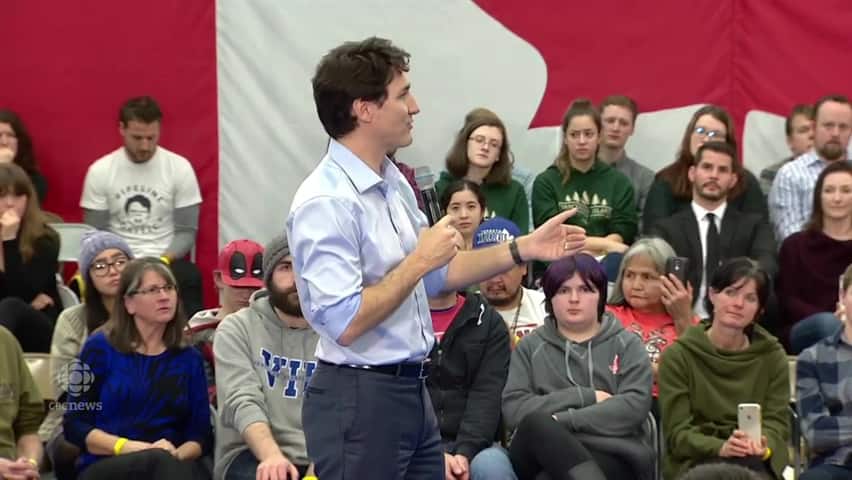 Trudeau on abortion and his father's legacy

3 years ago
2:23
Prime Minister Justin Trudeau tells a town hall in Nanaimo, B.C. the principle and reasoning behind his decision on abortion and the Canada Summer Jobs program. 2:23

Conservative Saskatchewan MP David Anderson said his office has received a "steady stream" of complaints about the new requirement.

"It's not just faith groups ... it's municipal government as well, saying 'We're just not comfortable with this,'" he said.

Anderson said he will be asking constituent groups to report on which applications are approved and which are rejected.

Conservative MP and former cabinet minister Tony Clement called it a "values test" and wondered if the charitable status of some groups could soon be at stake.

"Under Justin Trudeau's values test, if you don't agree with the ideological positions of the Liberal Party, your organization will no longer be eligible to receive funding for a summer student," he wrote in a post on his website.

"I am concerned for the students who won't find work as a result of this decision. Individuals who hold private convictions may, for example, no longer be able to help care for the disabled, refugees, or provide day camp for children in need."

Hajdu's news release said applicants can receive funding to support local priorities and those that complement "this year's national priorities," which include: