An anti-abortion group at the centre of the summer jobs grants controversy has been lambasted and singled out by Prime Minister Justin Trudeau for using graphic images to get their message out.

An anti-abortion group at the centre of the summer jobs grants controversy has been called out by Prime Minister Justin Trudeau for using graphic and disturbing images in its messaging.

Joyce Arthur, executive director of the Abortion Rights Coalition of Canada, said she believes those images should not only be grounds for denying the CCBR federal funds, but also should be outlawed as hate propaganda.

"Only women, and some transgender people, have abortions, so the message of the offensive images is that women are murderers, and their right to abortion should be taken away," she said. "This makes the flyers and signage discriminatory."

Some of the imagery in the flyers is accompanied by the words "unmasking choice."

Arthur said anti-abortion groups deliberately display such grisly images on signs to generate public shock and outrage, sometimes provoking people to vandalize the signs — or even assault those carrying them.

"This means that the signs shown in public appear to violate the Criminal Code hate speech law," she said. "Women and transgender people are both identifiable groups, the signage incites hatred against them, and the incitement is likely to lead to a breach of the peace."

City politicians in Toronto and other municipalities have called for a federal ban on flyers, posters and placards depicting bloodied, dismembered fetuses.

CCBR, which formed in 2001, has been involved in several legal tussles over its controversial use of what it calls "AVP" — abortion victim photography — and other tactics.

The group's mandate, according to its website, is "to make abortion unthinkable."

CCBR did not respond to phone calls and emails from CBC News.

Campaign Life Coalition said the graphic photos are used because they reveal "the truth about what abortion is."

Last year, the city of Grande Prairie, Alta. won the right to refuse to display a CCBR anti-abortion ad on city buses. In his ruling, the judge called the city's decision "reasonable" because the ad likely would have caused psychological harm to women who had abortions, or were considering one.

The judge also said the ad could have caused fear and confusion among children and drawn "emotional responses from public transit and others on the road, creating a hostile and uncomfortable environment."

The group also faced a public backlash for displaying ads on city buses in Peterborough, Ont.

In the fall of 2015, CCBR launched a public battle against Trudeau after he stated before the federal election that every Liberal candidate would have to support the Liberal party's pro-choice position.

In 2013, the group skirted city bylaws in Hamilton, Ont., suspending a large banner over an overpass by attaching it to their bodies, instead of to city property.

Christopher Kaposy, a bioethics professor at Memorial University of Newfoundland and a pro-choice advocate, said the CCBR's very name is an attempt to co-opt the language of a respected academic field to make the group seem mainstream and acceptable, when its tactics are "offensive, extremist, and probably counterproductive."

He called the images used by the group "grotesque."

"They often depict aborted fetuses as corpses, or compare abortion to the Holocaust with pictures of corpses," he said.

"In my own opinion, the use of these images is hateful in the sense that they are depicting the women who choose abortion as murderers. I don't know if that qualifies as hate speech in the law, but the use of graphic images to stigmatize women who are often making difficult reproductive decisions is certainly hateful."

CCBR defends its use of graphic images, arguing they speak louder than words.

The group insists it uses the images to ensure the Canadian public sees the "inhumanity" of abortion.

"There is an act of violence here, but it is not the fault of those exposing the injustice," its website reads.

The group contends that the images have saved unborn lives by convincing women not to abort. 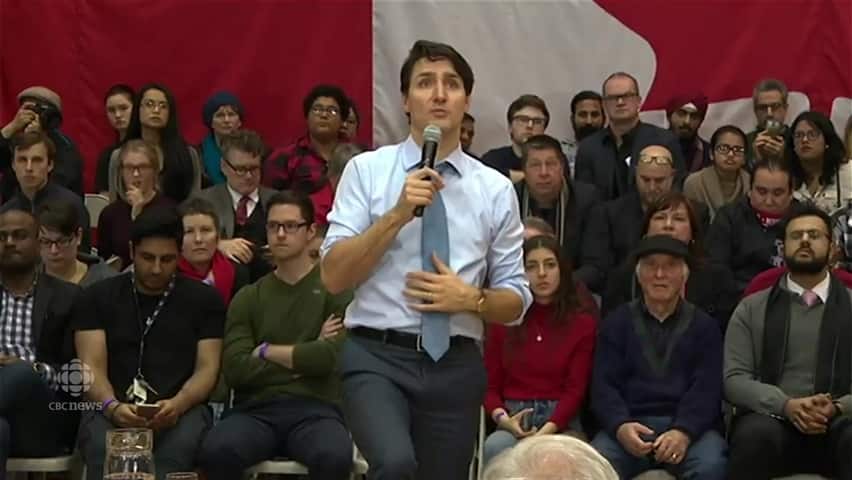 The CCBR is the only group that has been singled out publicly by Trudeau and Labour Minister Patty Hajdu as an example of what the government is addressing with the requirement that applicants for summer jobs funding sign the attestation form. But other groups are expected to be deemed ineligible for grants under the new policy — organizations that exclude LGBT persons, for example, or have a core mandate to fight reproductive rights.

The government's decision has prompted a fierce backlash from faith groups who feel their religious freedom is under attack.

But Peter Stockland, publisher of Convivium magazine and writer for the Christian think-tank Cardus, said the government's plan to counter anti-abortion groups may have backfired already — because the summer jobs attestation requirement has galvanized anti-abortion, religious and free-speech advocates.

"The government that wanted, for its own reasons, to finally extinguish the debate on abortion is now finding itself facing that debate from groups that had been basically pretty quiet about it for some time," he said.

The use of graphic images by the anti-abortion movement, however, remains a divisive tactic.

Stockland himself opposes the use of the images, calling them "dehumanizing and counter-productive."

"I just find them horrific. I don't like them," he said. "But not liking them is not a reason to bring the weight of government down and suppress them, which is what this is an attempt to do.

"If we do have free speech, well, we can't say, 'We don't like your graphic design.'"