The newly-appointed head of the Security and Intelligence Review Committee, former Tory cabinet minister Chuck Strahl, says his office will be able to fill the need for an independent review role following cuts to the CSIS inspector general's office. 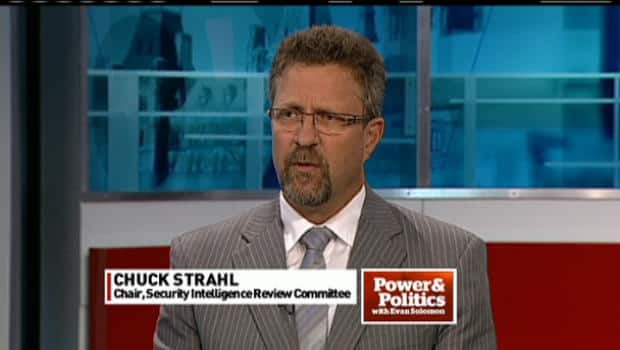 9 years ago
9:02
Chuck Strahl, the chair of the Security Intelligence Review Committee, talks about his department taking over as CSIS watchdog 9:02

The newly-appointed head of the Security and Intelligence Review Committee says his office will be able to fill Canadians' need for an independent review role now that budget cuts have closed the CSIS inspector general's office.

Former Conservative cabinet minister Chuck Strahl told host Evan Solomon on CBC News Network's Power & Politics Monday that recent changes have given his organization two roles: one to review the intelligence service's conduct and another to provide advice to the public safety minister.

"What Canadians need to be assured of is that the SIRC role is independent, it reports to Parliament, not just to the minister, and I think Canadians will want to see that obviously continue and it's something that SIRC guards quite jealously," Strahl said. "We want to make sure that that's not compromised in any way."

Strahl said the public reporting and ministerial advice roles will be kept separate. "We'll be able to do both."

Last spring's budget implementation bill eliminated the office of the inspector general at CSIS, a role that dated back to the mid-'80s after a series of high-profile intelligence failings eroded public confidence in the system.

"They don't do the same kind of work at all," she said in an interview with The Canadian Press late last week. "They don't go into the same depth, the same detail. And they're basically part-time people."

Plunkett, who retired in December, also provided a statement to Power & Politics, in which she characterized the elimination of the office as a "loss for Canada and for Canadians."

Plunkett's reports were often critical of CSIS, pointing out many failings and areas requiring attention.

"I firmly believe that the work of [her former] office has contributed to making CSIS a better organization," she wrote. "The notion that SIRC will fulfil the same role as the [inspector general] is unrealistic given their current structure, level of expertise and resources."

"They have a public role to play whereas the IG's role was to identify problems and recomment solutions before issues escalated to a level for public concern," Plunkett wrote to Power & Politics.

Strahl told Solomon that his office was given new resources to provide for its new responsibilities, adding two full-time staff equivalents and even bringing over some of the same people from the former IG's office to provide "good continuity." Although the members of his committee are part-time government appointees, he noted that the director and staff at SIRC are full-time, including its nine researchers.

Strahl said his office and those who used to work in the inspector general's role are "working hand in hand," including having full, unfettered access to all of CSIS's inside information.

Plunkett called the review role "an exercise in risk management," warning about the large increases in resources for CSIS over the past 10 years and what she calls an "ever-creeping mandate."

"One would think this was not the time to eliminate a low mechanism that served as a safeguard for Canada and the minister," she said, noting the relatively small dollar savings realized by the elimination of the IG's office.

"This office was a measure of insurance for a minister in his responsibility and accountability for an organization with highly-intrusive powers while working all the while largely in secret."

Plunkett noted that other jurisdictions around the world are not cutting oversight but rather increasing its role for their intelligence and security agencies.

"Canada seems to be on a different track moving away from truly independent advice and scrutiny," Plunkett wrote.

Strahl noted that not everything was "on SIRC's shoulders" and that other bodies were involved in oversight. He also took issue with Plunkett's assertion that countries like the United States are doing it better, pointing out that the U.S. Central Intelligence Agency, for example, doesn't have an independent oversight or review committee that works outside the organization. Stahl also pointed to Canada's decision long ago not to compromise SIRC by making it part of CSIS.

The new role that Strahl's office is assuming from the former inspector general's office is the certification process for CSIS reports. Other things Plunkett's office did may not be covered by SIRC.

But Strahl, who was appointed in mid-June after a long vacancy at the helm of the review committee, said the elimination of the inspector general wasn't a loss for Canada, as Plunkett claims.

"When I look at the reports that both [offices] put out there's a fair amount of duplication," Strahl told Solomon Monday. He said his researchers were sometimes doing work the IG's office was already doing, despite efforts to co-ordinate between the two.