New legislation to ensure criminals convicted of the worst crimes have no chance of being released from prison will be tabled during this sitting of Parliament, Public Safety Minister Steven Blaney confirmed Tuesday. 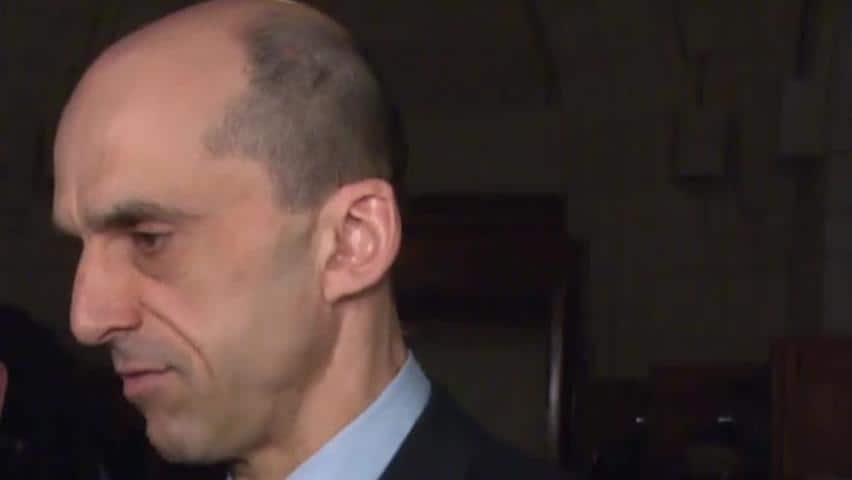 Life in prison without parole bill coming before summer

6 years agoVideo
2:29
Steven Blaney says life in prison without parole bill to be tabled before June 2:29

New legislation to ensure criminals convicted of the worst crimes have no chance of being released from prison will be tabled during this sitting of Parliament, Public Safety Minister Steven Blaney confirmed Tuesday.

"I've clearly indicated in the speech from the throne that those individuals who are committing violent and serious repetitive crime should be kept behind bars," Blaney said in Ottawa.

"What we intend to do is table legislation that will protect the society from those individuals who represent a threat... before June."

The government said in its speech from the throne in 2013 that "for too long, the voices of victims have been silenced, while the system coddled criminals."

"Canadians do not understand why the most dangerous criminals would ever be released from prison. For them, our government will change the law so that a life sentence means a sentence for life."

At the time, the government said the "most heinous" offenders included criminals convicted of multiple murders or sex assaults on children.

The Conservatives set out early on to toughen up Canada's Criminal Code with their push for a "tough-on-crime" agenda.

In 2011, the government was successful in repealing the "faint hope" clause, which gave life-sentenced offenders the possibility of judicial review for parole after serving 15 years.

Offenders convicted of first-degree murder are currently eligible for parole after 25 years.

Howard Sapers, Canada's prison watchdog, said he would reserve comment until the government tabled its bill but offered some facts he said ought to be considered when weighing the merits of such a proposal.

Sapers said in a phone interview with CBC News that the facts show "there's not a lot of violent recidivism among life sentences offenders."

"Generally speaking, offenders who are released on day and full parole have a very high success rate of completing their period of parole without reoffending," Sapers said.

He pointed to the following statistics:

Sapers said it should also be considered that Canada already has "a strong carceral response" to violent crimes.

Offenders sentenced to life in Canada spent an average of 22 years in prison prior to conditional release — that's "as much or more time," Sapers said, than offenders in other jurisdictions including the U.S.

"Understanding what the legislation will do and what it's suppose to accomplish will have to be filtered though those facts," he added.

Sapers said the government has in the past six years followed through with legislative changes to the way sentences are imposed and administered.

"The cumulative impact of those changes is more people spending longer periods of time incarcerated — and that's the stated intent."

Opposition MPs were skeptical of the government's long-promised plan to throw away the key saying the emphasis should remain on rehabilitating inmates.

NDP public safety critic Randall Garrison said removing the possibility of parole will do "nothing" to build a safer community.

"Our crime rate is dropping and we have to keep a sense of perspective," Garrison said in Ottawa on Tuesday. "Let's look for measures that are effective."

He also said denying any chance of parole to the most dangerous criminals would put prison guards at risk. "I would have concerns about the safety of correction officials."

Liberal public safety critic Wayne Easter said his party will wait to see the details of the bill, but that throwing away the key is not the solution.

"We've always, in this country, believed that there is the opportunity for rehabilitation. That just putting people behind bars ... isn't the answer.