Public Safety Minister Steven Blaney says the latest terrorism charges laid in Ottawa are the result of "outstanding work" by the police, but more legislative tools are necessary to protect Canadians. He wouldn't say whether more arrests are coming. 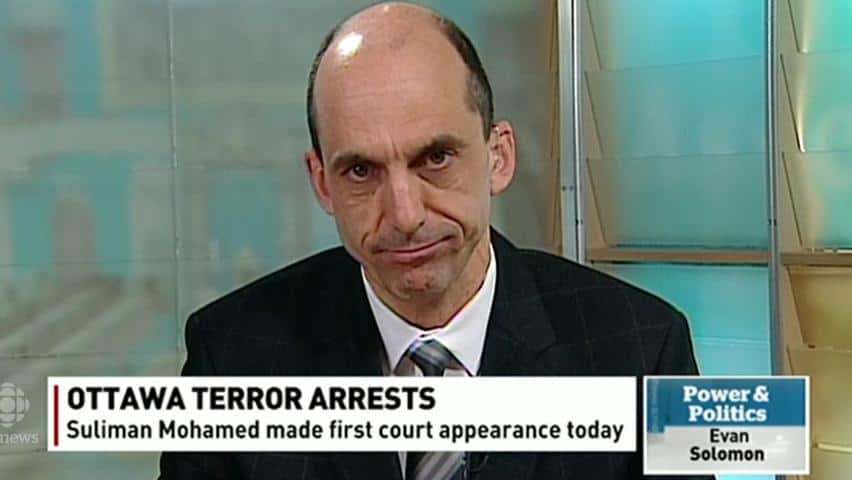 6 years ago
13:07
Public Safety Minister Steven Blaney responds to three terror-related arrests in Ottawa and discusses the attacks in Paris. 13:07

Steven Blaney says the latest terrorism charges laid in Ottawa are the result of "outstanding work" by the police, but more legislative tools are necessary to protect Canadians.

The public safety minister congratulated the RCMP and intelligence officers, saying he's confident the three men will face the full force of the law after a fair trial.

"Those arrests are made when there are serious cases built after weeks and months of evidence. A lot of resources are devoted to this important task," he told host Evan Solomon on CBC News Network's Power & Politics Tuesday.

"This is reinforcing how secure we can feel," he said.

Earlier Tuesday, Suliman Mohamed's lawyer, Doug Baum, told reporters that the federal prosecutor wasn't disclosing information about the case against his client that would normally be given out when a suspect appears in court.

"Because of the timing of the arrests, the investigation itself may not have been complete," Baum said the federal prosecutor told him.

Solomon asked Blaney whether the three men arrested this week were among the 90 suspects disclosed by RCMP Commissioner Bob Paulson during a Commons committee meeting early last October.

The minister said the three from Ottawa now facing terrorism charges "most probably" fall into this last category.

When pressed, he wouldn't update Paulson's numbers, saying the RCMP's list is fluid and updated on a daily basis.

"They have stopped sharing those numbers because there are different levels," he said, adding that he trusts the RCMP's capability and the need for vigilance remains.

The minister said legislation that reached report stage just before Christmas break is about making sure CSIS has the capabilities it needs.

Blaney said Canada will be part of meeting of countries working together in the "Five Eyes" information-sharing network in London in a few weeks. When he was in Paris last weekend he met with Canada's head of mission for CSIS, who is sharing information with French authorities.

"This is serious stuff," Blaney said. "We are more dedicated than ever to track those individuals and enable those who are there to protect us."

The minister also spoke of the Harper government's plans for another piece of new legislation "as soon as we get back in the House [of Commons.]" (Parliament resumes on Jan. 26.)

"Those individuals who are prevented from travelling because we have removed their passport, we have to have the tools to be able to track them, to monitor them and to make sure that if they are willing to commit terrorist attacks here in Canada we have to be able to enable our police officers to take action," he told CBC News.

Blaney has said previously that the new bill will be focused on surveillance and detention of terrorism suspects. He's also discussed whether Canada needs to consider the kind of border controls now being implemented in Europe to track suspect movement.

Some suggest as many as 30 of the suspects that have come to the attention of authorities may be in the Ottawa area. Asked whether a terrorist cell active in Ottawa in particular was a concern, Blaney gave examples of arrests across Canada.

"Geography is one aspect, but the profile is hard to determine," he said, saying it's difficult to track the recruiting and radicalization process online and elsewhere.

He wouldn't comment on whether more arrests were coming.

"They're the same ones who are killing people in Syria and in Iraq. They are part of the Islamic State. They are networking. They can be in other Western countries. They can be Canadian born, they can be foreigners. What is important for the RCMP is not where you're coming from, it's what you're doing and how you're using your liberty and your freedom."

Blaney said Canada's response to last week's attacks in Paris — for which Yemeni group Al-Qaeda in the Arabian Peninsula now claims responsibility — "sent a clear signal" to others contemplating attacks. People are fed up with attacks on their democracy, the minister said.

"We have to be under no illusion that those who are breaking the Criminal Code will face [the full force of the law.]"

Despite complaints from a defence lawyer yesterday about the lack of information about the case against his client, suspects' rights were being "well taken care of," even as they are held without bail, the minister said.

"I just wish that they provided the innocent people they attack with the same protection that we have provided them, but that's why we are fighting this evil so hard," Blaney said.