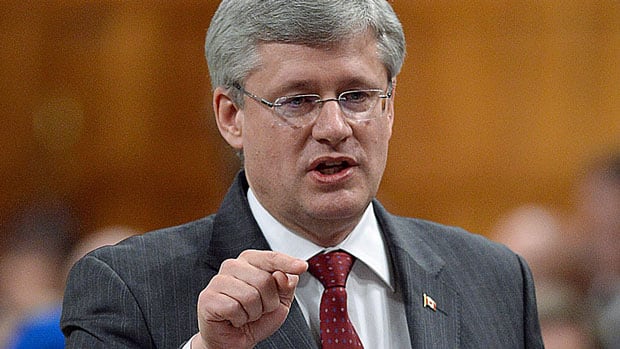 PM hits back at Senate questions

The 81-page RCMP affidavit, released by an Ottawa court, details negotiations last February between Harper's former chief of staff, Nigel Wright, and Senator Mike Duffy, in an attempt to quell a rumbling scandal over Duffy's expenses.

RCMP Cpl. Greg Horton said in the affidavit that he was investigating Wright and Duffy for bribery, fraud on the government and breach of trust.

Opposition MPs seized on the new information in question period Wednesday, using the details as ammunition against a prime minister they say now has a dozen close officials linked by the RCMP to the scandal and its alleged coverup.

Harper maintains he didn't know until May 15 of this year that Wright gave Duffy more than $90,000 to repay his questionable Senate expenses.

"What the RCMP has confirmed in its documents today is that two individuals, Mr. Duffy and Mr. Wright, are under investigation for their actions in this matter," Harper said.

"And they have also confirmed that this prime minister has been telling exactly the truth."

'He did not inform me'

NDP Leader Tom Mulcair asked the prime minister if he wanted to change anything he's told the House since the story of the deal first broke on May 15.

"Unfortunately for him, on May 14, Nigel Wright wrote that the PM did know that he, Wright, had, quote, personally assisted Mike Duffy. Is that true?" Mulcair said.

Harper said the answer is in the court documents.

"Mr. Speaker, let me be very clear," Harper began, before being interrupted by guffaws from the opposition benches.

"Well, it's right in the documents, Mr. Speaker, about what Mr. Wright told the RCMP," Harper continued.

"He said he told me that Senator Duffy had agreed to repay the money. He told [them] that he did not inform me of his personal decision to pay the money himself."

Harper 'may have been aware' of legal fees

Horton alleges PMO officials interfered with a Senate committee report based on an audit by Deloitte, and tried to stop the Deloitte audit once Duffy used Wright's money to repay his debt.

The Conservative Fund is the party's fundraising arm, which is run by Senator Irving Gerstein.

Horton notes that the details of what Wright discussed with Harper are not contained in the emails, but goes on to say, "I am not aware of any evidence that the prime minister was involved in the repayment or reimbursement of money to Senator Duffy or his lawyer."

Liberal Leader Justin Trudeau pointed to the crimes alleged in the affidavit.

"Does the prime minister still believe that he bears no responsibility for the corruption in his own office?" he said.

Horton quotes from emails sent by Wright that suggest he spoke to Harper about Duffy. In one email quoted by Horton, Wright tells other PMO officials, "we are good to go from the PM."

"Good to go with Mr. Duffy repaying his own expenses," Harper said.

"I was told that Mr. Duffy was going to repay the money himself. Something he announced on national television for everybody.

"And let me tell you what the conclusion of the RCMP is on this. After months of interviews and review of documents, the investigator says, he is not aware of any evidence that the prime minister was involved in the repayment or reimbursement of any money to Mr. Duffy or his lawyer."