Relations with Canada's second-largest trading partner were challenged this summer after a cyberattack on the National Research Council and the arrest of two Canadians in China on spying charges. The prime minister's five-day trip is shorter than originally planned so he can return to Ottawa in time for Remembrance Day. 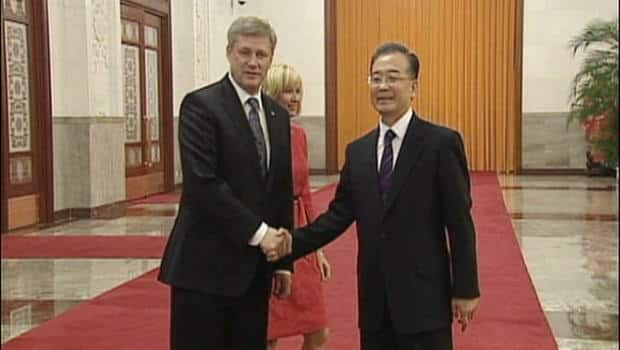 The trip comes after a tumultuous few months between the two countries.

First came the accusation of a Chinese cyberattack on the National Research Council in July.

Then a Canadian couple, Kevin and Julia Garratt were detained a few weeks later, when the Chinese accused them of spying.

Things took a more constructive tone recently, when Harper sat down with the Chinese ambassador to Canada to formally announce his third trip to China.

Originally, Harper planned to attend the APEC leaders' meeting in Beijing on Nov. 10-11. After the shooting of Cpl. Nathan Cirillo and the attack on Parliament Hill last month, the prime minister's office signalled that he'd change his travel plans.

Harper formally thanked the Chinese for understanding why he has to cut his trip short.

"I should just acknowledge that I'm very pleased that the Chinese have been very flexible in terms of scheduling this in order to accommodate my attendance at Remembrance Day at the National War Memorial. That's something that's truly appreciated," Harper told reporters.

Despite the fact that the trip is short, the prime minister is still going, according to ex-ambassador David Mulroney, because he recognizes the importance of China, which many believe will have the world's largest economy in a few years.

"In a world where China is ever-increasingly more important, it will play an increasing role in our prosperity," said Mulroney, now with the Munk School of Global Affairs at the University of Toronto. "So if Canadians want to grow their standard of living in the years ahead, we need a smart relationship with China."

Not everyone around the cabinet table, or in the Conservative caucus, is on side.

Employment Minister Jason Kenney is not among the ministers on the trip. He's been vocal in his criticism of China, tweeting recently about his meeting with the Dalai Lama, where the two spoke about religious freedom and human rights.

"This is a very critical relationship for Canada's economic future. So the prime minister's been there before. We're going back with a number of ministers and we look forward to having a very, very fruitful visit," Moore told CBC News.

Government officials say they expect many large commercial agreements to be signed on the trip, which includes a stop in Hangzhou and Beijing.

The delegation wants to help not just large companies, but also small and medium-sized businesses, benefit from the Chinese economy.

And there's speculation Canada will get a Chinese currency hub, so Canadian companies don't have to convert to U.S. dollars first, then to the yuan renminbi.

Advocates say this could inject billions into the Canadian economy.

The prime minister is still expected to raise thorny issues such as cybersecurity and the consular case of Kevin and Julia Garratt.

"When it's done that way, across the meeting table, eyeball to eyeball, we find the Chinese officials engage directly. They respond directly," says Day, who's now with the Asia Pacific Foundation and does a lot of business in China.

"It always serves as enabling to have both sides get their concerns on the table, whether its trade or democratic-related issues."

In another signal Canada wants to reestablish its trade relationship, the prime minister has decided to attend the start of the APEC forum in Beijing instead of skipping it entirely.

Mulroney says it is important to the new Chinese leaders to host this event and it will be noticed that the prime minister is attending the opening day.

"At a time when we're really trying to make our case in the Asia-Pacific region as a key member of that region and we're getting a little bit of skepticism from some countries that think we haven't been as active, being at APEC is just something you have to do if you want to make that case," Mulroney said.