Canada has only 26 soldiers in Iraq serving as military advisers, rather than the 69 troops the government had said it was sending, Prime Minister Stephen Harper told the House of Commons on Wednesday.

Prime minister hasn't yet made a case for air mission, Tom Mulcair chides 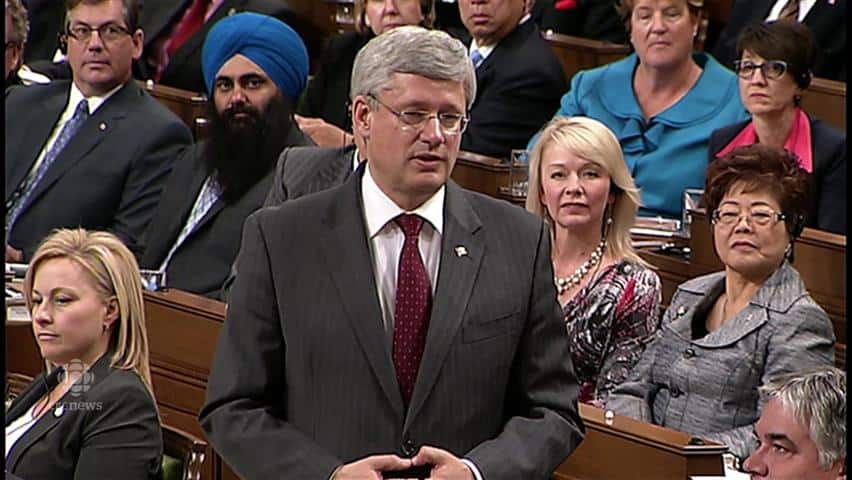 6 years agoVideo
1:50
Prime Minister Stephen Harper told MPs Wednesday that 26 Canadian military advisers are in Iraq - far fewer than the 69 the government had been previously mentioned. 1:50

Canada has only 26 soldiers in Iraq serving as military advisers, rather than the 69 troops the government had said it was sending, Prime Minister Stephen Harper told the House of Commons on Wednesday.

Earlier Wednesday, New Democrats said that Foreign Affairs Minister John Baird told them in an email that only 26 special forces troops were on the ground in northern Iraq to help fight the Islamic State in Iraq and Syria, or ISIS, rather than the 69.

Harper's confirmation came in response to a query from NDP Leader Tom Mulcair, who posed another series of short, pointed questions about Canada's deployment during question period.

"It is 26 [Canadian soldiers in Iraq] today," Harper said. "The government has authorized 69, as is well-known. That's obviously a maximum. Those numbers will fluctuate depending on the decisions of operational commanders."

Harper told the House on Sept. 16 that Canada was "in the process of deploying" 69 soldiers.

Employment Minister Jason Kenney told the House that same day that "69 brave men and women of the Canadian Armed Forces are providing tactical advice to the Kurdish militias​."

On Sept. 26, James Bezan, parliamentary secretary to Defence Minister Rob Nicholson, told MPs there were "69 members of the Canadian Armed Forces who are providing tactical advice in Iraq," although in a separate answer he'd said "up to 69" special forces were being deployed.

Nicholson himself told the House on Sept. 25 that Canada had "committed" 69 soldiers and that "69 members of the Canadian Armed Forces have the full permission and co-operation of the Iraq government​."

Liberal Leader Justin Trudeau decried what he said was Harper's "secrecy and evasiveness."

"This is unbelievable, Mr. Speaker. We still don't have clear answers," he said.

Both opposition leaders had earlier questioned whether Harper was giving Canadians enough information about a possible combat mission in Iraq.

'Propel us full force into a war'

"This is not a UN mission, so we've got to be extremely careful before we start listening to the siren song of those who would propel us full force into a war," Mulcair said as he left the party's weekly caucus meeting on Parliament Hill.

Asked whether Mulcair would consider supporting an air combat mission with an end date, he said there's no proposal right now.

"We certainly haven't heard the Conservatives make the case for that. They haven't in any way, shape or form been able to show to the Canadian people why that [sending CF-18 fighter jets] is Canada's best contribution in the current crisis there. If he was able to make that case, he would have started doing it. He can't make that case," Mulcair said.

The NDP leader says he was briefed by Harper before Canadian special forces went into Mali, but hasn't yet been offered a briefing on a possible mission in Iraq to combat fighters from the Islamic State in Iraq and Syria..

Trudeau echoed Mulcair's complaint that Harper has not convinced him of the need for a combat mission.

"The prime minister seems intent on taking us into a war in Iraq. It is his job to make the case for that and so far he has failed in any level of openness, transparency or frankness in his actual approach," Trudeau said after the Liberal caucus.

He said the revelation that there are 26 Canadian special forces in Iraq shows the "government is preferring to be secretive and play games."

Conservative MP Erin O'Toole, a former military pilot, said he hasn't heard any discussion of how many planes might go if cabinet decides on an air mission, or a timeline for any potential mission. But he suggested the government favours an air combat role.

"We've got to play a role commensurate with our size and ability and those decisions are being made on what type of role that should be. Airstrikes is one option that is being heavily considered," O'Toole said.