In a rather unusual campaign stop Monday, Conservative Leader Stephen Harper used props and cash register sound effects to help him illustrate the impact of "Liberal tax hikes." He had a local mother drop cash on a table, set to the sound effects of a cash register. 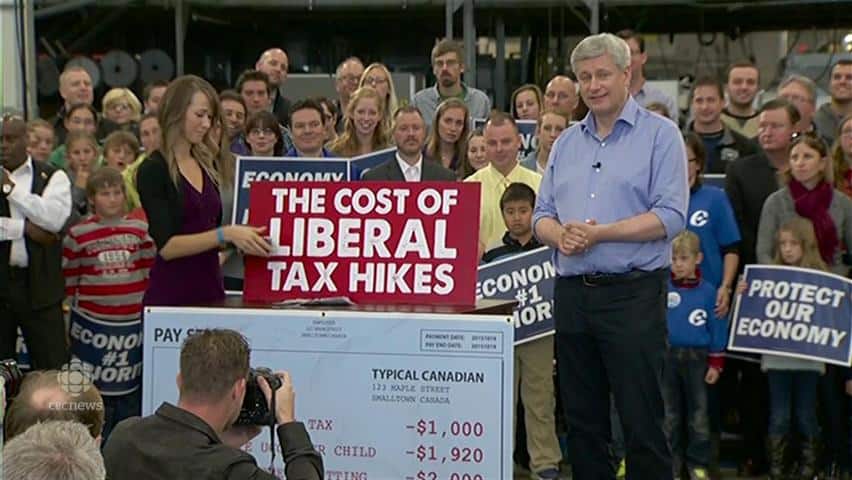 5 years ago
1:41
Harper illustrates cost of Liberal tax changes with a family in Waterloo. 1:41

In a rather unusual campaign stop at a fruit farm in Waterloo, Ont., Conservative Leader Stephen Harper used props and cash register sound effects to illustrate the impact of "Liberal tax hikes."

Harper introduced the audience to Nicole Ropp and her family to provide an example of how the hikes would impact families like them.

"Under a Liberal government, [the Ropps] would lose $3,360 in annual child care cheques. So let's quite literally put that money on the table."

Ropp proceeded to drop currency notes on a table, while the ka-ching of a cash register repeatedly played over speakers. The table was adorned with a large sign labelled "The Cost of Liberal Tax Hikes" and a faux pay stub with red, negative amounts.

This went on for about a minute and five seconds. Harper mainly stood in silence while Ropp dropped the money on table, though he adjusted the bills and made quips every so often.

"Now you know why I really have all the police ringing this," he said, to laughs from the audience.

Many thought the Tories were paying a nod to the beloved game show, The Price is Right...

... while some likened it to other memorable game shows.

Others seemed really irked by the sound of the cash register.

That cash register noise was just annoying. Period. <a href="https://twitter.com/hashtag/elxn42?src=hash">#elxn42</a>

It drew comparisons to another memorable noise from the campaign.

There were throwback references to the infamous timing instrument (what sounded like an egg timer) from the Globe and Mail leaders' debate on the economy from back in September.

<a href="https://twitter.com/RosieBarton">@RosieBarton</a> whoever thought that was a good idea? Worst election noise since the Globe and Mail bell.

The campaign stop was taking place at Martin's Family Fruit Farm, just outside of Kitchener-Waterloo, locally referred to as K-W.

<a href="https://twitter.com/RosieBarton">@RosieBarton</a> Harper is a game show host today. Cash register sounds and everything!

<a href="https://twitter.com/CBCNews">@CBCNews</a> : I always thought KW could use more prop comedians in their comedy scene.

And some opted to be more serious, pointing out faults with Harper's portrayal of the Liberal plan.

This Liberal supporter tweeted a graph of the Liberal child benefit plan from their "Fairness for the Middle Class" document. The graphs shows the comparisons between the Liberal plan and the Conservative plan.

Liberal Leader Justin Trudeau responded to Harper's attacks on his plan on Monday, calling them "misleading" and "desperate".