In retaliating against U.S. tariffs on Canadian steel and aluminum Canada crafted a list of quirky, mismatched targets for its own tariffs that look more like a MacGyver shopping list than a strategic plan to bring about a change to U.S. policy.

In retaliating against U.S. tariffs on Canadian steel and aluminum, Canada crafted a list of quirky, mismatched targets for its own tariffs that may look more like MacGyver's shopping list than a strategic plan to bring about a change to U.S. policy.

From pizza and quiche to strawberry jam, ketchup and mustard, the tariff target list Foreign Affairs Minister Chrystia Freeland released today seems completely remote from steel and aluminum. (What does hair lacquer have in common with a steel girder?)

"This list was clearly drawn strategically to exert maximum pain politically for the president," said Maryscott Greenwood of the Canadian American Business Council.

There is a two-week consultation period for Canadians to weigh in on the list, with tariffs taking effect July 1.

While the first list released by the federal government targets steel with 25 per cent tariffs, items on the second list — which will be subject to a 10 per cent tariff starting July 1 — were clearly put there to put some U.S. politicians in a bit of a pickle.

Take Paul Ryan, the Republican Speaker of the U.S. House of Representatives. He represents a district in Wisconsin where there is significant cucumber and gherkin industry. 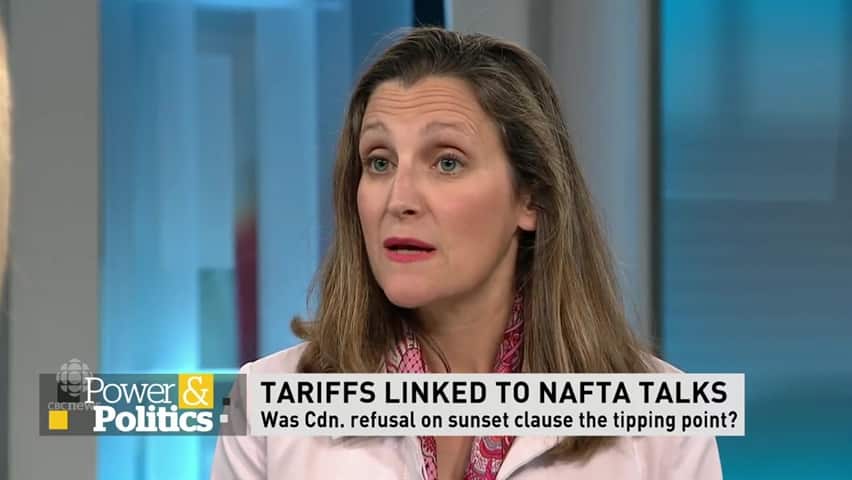 That state also has a large dairy industry, which could help explain why yogurt was added to the list. But Wisconsin is also home to a manufacturing plant and distribution centres belonging to the Toro Company, the owner of several lawn mower manufacturers that sell to Canada. Which probably explains why "mowers for lawns, parks or sports-grounds" were added to the list.

"The general reasoning is to choose items which won't hurt Canadian consumers — they won't have to buy them at inflated prices. And items that are in sensitive political areas," said John Weekes, Canada's former chief negotiator for the North American Free Trade Agreement.

An obvious item that fits the bill is maple syrup. Canada has lots of it, of course, and doesn't need to import the sticky stuff from states such as Vermont, which has an established industry. So no Canadian is likely to be hurt with that tariff.

This is like the Cold War and the doctrine of mutually assured destruction- Maryscott Greenwood, Canadian American Business Council

But it also puts pressure on Vermont's Independent Senator Bernie Sanders — a loud voice in the U.S. Congress — to rile up his political machine to defend one of his state's signature industries.

It's unclear whether slapping tariffs on beer kegs, mineral water and soy sauce will have the desired effect, but Freeland — speaking to CBC News Network's Power & Politics — urged U.S. exporters of these items to contact their elected representatives.

"For the affected companies, seeing yourself on that list is very powerful and frankly this is a period — during the consultation period — when I hope U.S. exporters to Canada will make their voices heard," Freeland told host Vassy Kapelos.

One U.S. legislator who is likely to get a rap on his door from grumpy businesspeople is Republican Senate Majority Leader Mitch McConnell, who represents the state of Kentucky, a great producer of bourbon whiskey. Yes, U.S. whiskies are on that list too.

"When it comes to the details of the lists, once you get past the steel (and) aluminum, there are obvious slaps like whiskey, which is of course aimed at Mitch McConnell in Kentucky," said Gordon Ritchie, a trade expert who negotiated Canada's first free trade agreement with the U.S.

"I think this is the best executed trade countermeasure I've seen in 50 years. But the Trump action is sheer, utter idiocy," he added.

Ritchie said that in the past, Canada would first pursue a resolution through a legal trade tribunal and then afterwards impose tariffs. The move to impose tariffs first, he said, marks a departure in Canadian practice by acting quickly and targeting specific U.S. electoral regions.

One of those regions is Pennsylvania, home of the Hershey chocolate company. Chocolate, in blocks, slabs or bars, was also added to the list of ten per cent tariff items, along with candy in general.

Upsetting voters in Pennsylvania is not something U.S. President Donald Trump will want to do. He narrowly won that state in the 2016 election, breaking a Democratic grip on the state that held for the past six presidential elections.

Another target is fresh orange juice, which comes from another state Trump narrowly won in 2016: Florida.

Of course, not all of the items on the list are as easy to explain. Why, for example, did mayonnaise, salad dressing, automatic dishwasher detergents and certain types of plywood make the list?

"When you run down the detailed items on the list, I can't second-guess these guys," said Ritchie. "They've done a lot of detailed work and consultation and the next 15 days will check whether they've got it right."

Of course, none of the tariffs have to be imposed. There's still almost a month for the U.S. to rethink its strategy here — and Greenwood thinks that might actually be the real play here.

"The goal here is not to actually levy the tariffs," she said. "This is like the Cold War and the doctrine of mutually assured destruction.

"You don't actually ever want to fire warheads. You just want the other side to know that you've got them so that everybody stays calm and peaceful, and this is the economic analogy to that."