Speaker limits budget votes but long hours ahead for MPs

Opposition MPs have prompted at least 67 rounds of voting on 871 changes they've proposed to the federal government's massive budget implementation bill. Speaker Andrew Scheer decided to bundle the amendments, meaning MPs could be voting for up to 24 hours. 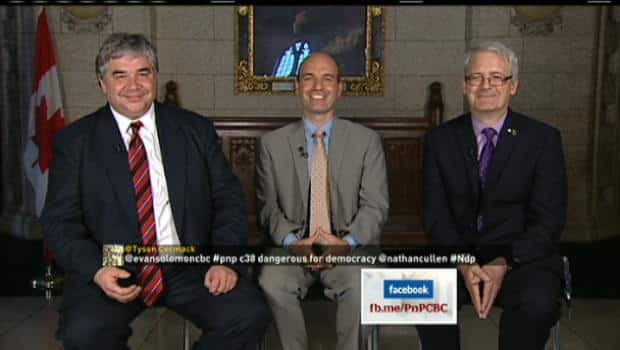 House of Commons Speaker Andrew Scheer bundled the amendments into 67 groups, though there could be up to 159, depending on the results of the earlier rounds of voting. The decision means MPs could face up to 24 hours of voting, though it's hard to predict how long the process will actually take.

The House can get through about six votes every hour.

NDP House Leader Nathan Cullen says his party's MPs have packed their pyjamas and pillows for the votes.

"The role of Parliament must continue, despite having a government that doesn’t want to bother itself with the travails of democracy," he said.

The 24-hour estimate, however, is less than some opposition MPs predicted, and far less than the round-the-clock sittings last June as the NDP filibustered the government's back-to-work legislation for Canada Post. That filibuster lasted 58 straight hours.

The government is likely to move time allocation to limit debate in the final stages, although Government House Leader Peter Van Loan wouldn't confirm that's the plan. He also wouldn't say when the voting is expected to start.

Green Party Leader Elizabeth May says this is what happens when the government tries to cram so much into one bill.

"This legislation is 700 clauses. I mean, you're not going to be able to do a decent job of amendments without having hundreds of amendments. It's not a tactic. It's a natural consequence of the size and scale and scope of the bill that [Finance Minister] Jim Flaherty put forward," she said.

Making changes like the ones she's proposed is part of a parliamentarian's job, May said, not a threat to the Canadian economy as the government has painted it.

"Amending the omnibus budget implementation bill is the obligation and duty of parliamentarians who have become aware... that the 420 pages amending 70 laws are not connected to the budget," she added.

Scheer, in response to May's point of order about the omnibus bill being "imperfect" because it's not a true omnibus bill, ruled the bill in order because the rules regarding omnibus legislation aren't clear.

Are these tactics the best way to oppose the budget? Take our survey.

Liberal House Leader Marc Garneau says there are about 75 amendments tabled by the NDP that don't overlap with his party's changes, which they tabled first.

NDP House Leader Nathan Cullen last week painted the amendment votes as confidence votes. In parliamentary tradition, any vote on a budget issue can be considered a confidence vote, but it's up to the prime minister to decide whether he will consider a lost vote to be a matter non-confidence. A vote of non-confidence generally means the government has to run in an election to regain its mandate from voters.

Are the votes confidence motions?

"There are a lot of votes in here that, by our own admission, have nothing to do with a budget, so it'll be interesting to see how that's interpreted if it turns out that we win a vote or several votes during the course of the marathon of voting," he said.

May says C-38 isn't any more a budget matter than any other law, all of which involve spending at some level.

"This isn't a money bill. I remain to be convinced that any of them [the amendments] are confidence motions," she said.

The omnibus bill, with more than 400 pages, would change more than 70 existing laws.

Almost a third of the Budget Implementation Act deals with changes to existing environmental legislation. It includes a new Environmental Assessment Act along with important changes to the Fisheries Act, the Species at Risk Act and the National Energy Board Act.