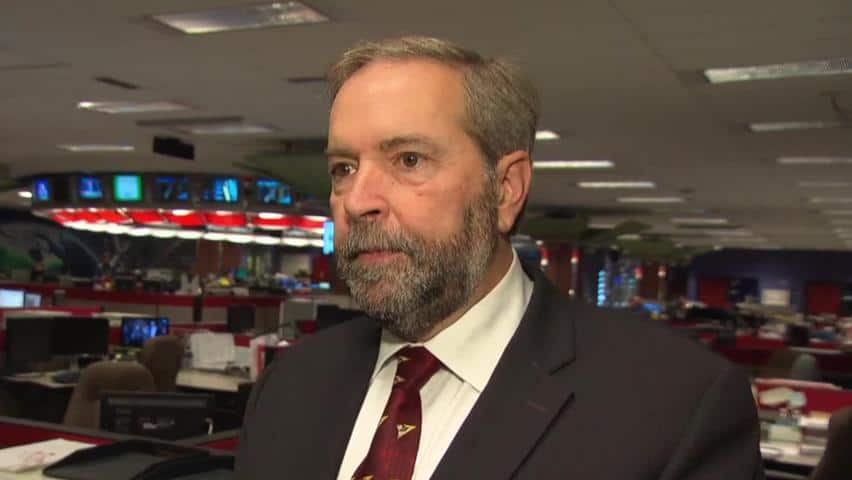 6 years ago
6:35
NDP Leader Tom Mulcair says Prime Minister Stephen Harper has already made up his mind on Canada's combat mission in Iraq. 6:35

Harper briefed the Conservative caucus Wednesday on the options for Canada to increase its contribution in the fight against the Islamic State in Iraq and Syria, also known as ISIS or ISIL. He says he'll bring any plan for a combat mission to the House of Commons for a debate and vote.

Canada has offered 69 military advisers, although the Conservatives admitted Wednesday that only 26 are on the ground in Iraq. Canada has also been flying military aid provided by other countries and as of last week had completed 25 flights carrying more than 680,000 kilograms of military equipment to northern Iraq.

"There's no question that Mr. Harper's mind's already been made up so any consultation at this stage of the game, frankly, will be phoney," Mulcair told CBC News.

"This is not a UN mission, it's not a NATO mission, and Canadians should have full information before we plunge headlong into another war."

Mulcair also criticized Harper for planning to announce on Friday what Canada will do to help fight ISIS. That's a day on which the House sits for only a few hours, and when many MPs are either back in their ridings or en route.

Canada is widely expected to contribute CF-18 fighter jets and is already readying two CC-150 refuelling jets in Mirabel, Que., as part of the new mission.

Immigration Minister Chris Alexander, who spoke about his own experience in Afghanistan when he served as Canada's ambassador to that country and then as a deputy special representative of the UN mission there, said there's "absolutely no substitute" for air combat in such battles.

"Air power is essential… That has been key to military success in Afghanistan from the beginning and it's already very important given the actions of our allies to containing the spread of ISIL and other terrorist groups," he told CBC News.

"We are, as a country, I think … determined to make sure we keep our country safe. And that we don't contribute to a conflict that has already reached a much higher scale than anyone would have wanted," Alexander said.

"So it's a question of containing it in the region where this conflict is playing out, as you heard the prime minister describing our strategy, and then doing everything in our power at home to make sure that those determined to harm us from outside are unable to do that."

Government House leader Peter Van Loan, addressing the House Thursday, left open the possibility of a debate on Monday, setting out the schedule for Friday and Tuesday but skipping the business day in the middle.

"There is the potential for the schedule that I have laid out for you to be interrupted at some point in time by the need for a motion of this House should there be a decision by the government to proceed for a combat mission," Van Loan said.

Others, however, are warning it's important not to provide all the details sought by Mulcair and Trudeau.

Retired major general Lewis MacKenzie, who spent 35 years in the Armed Forces and was chief of staff for the United Nations peacekeeping force in the former Yugoslavia in 1992, said the government shouldn't be talking in detail about its plans.

"As an ex-commander, I get terribly upset with people going on national television, [like] the president of the United States, and telling your opponent what you're going to do, when you're going to do it and how long you're going to stick around. And those types of answers are being solicited as we speak here now in the Parliament of Canada," MacKenzie said in an interview with CBC News Network.

But, he added, it's already been widely reported what Canada is likely to do.

"I think probably F-18s will be deployed, along with refuelling [capability] and perhaps the Aurora for surveillance and intelligence gathering, because that's what's lacking over there," he said.

That type of mission is "relatively safe," MacKenzie said, pointing to Canada's involvement in air combat in the first Gulf War, the late 1990s conflict between Serbia and Kosovo, and in Libya in 2011, "without a plane being scratched."

PM 'failed to meet that standard'

Mulcair and Trudeau are sounding similar notes in their criticism of Harper. On Wednesday, both said Harper hasn't properly made his case for a combat mission.

Trudeau, in a speech at a conference in Ottawa Thursday, attacked Harper's handling of the debate.

"How did Mr. Harper let Canadians know that he was thinking about sending their fellow citizens into war? He announced it casually in New York — during an interview with the Wall Street Journal at Goldman Sachs," Trudeau said.

The Liberal leader called Harper's approach "troubling," and said the government hasn't briefed the opposition leaders and hasn't answered specific questions in the House about the possible mission.

"Canada has asked a lot of our men and women in uniform over the last decade. And too often they have returned home only to be let down. If we dare ask more of them now, there ought to be a good reason," Trudeau said.

"Canadians expect the highest standard of openness and honesty from a leader who wants to send our forces to war. Prime Minister Harper has so far failed to meet that standard."

Mulcair took his case to question period on Thursday, which both Harper and Trudeau skipped.