NDP Leader Jagmeet Singh said today he'd be happy to talk with Liberal Leader Justin Trudeau to discuss racism in the wake of the prime minister's blackface revelations — provided the discussion happens in private and is not used for political purposes.

NDP Leader Jagmeet Singh said today he'd be happy to talk with Liberal Leader Justin Trudeau to discuss racism in the wake of the prime minister's blackface revelations — provided the conversation happens in private and is not used for political purposes.

"His office reached out and I have indicated that I am open to having a conversation, as long as it remains private and I am not in any way used as a way for the Liberal Party to redeem the situation," Singh told CBC Radio's The House in an interview airing Saturday. "That is for Canadians to make the decision."

Singh first said that he would be willing to speak with Trudeau earlier Friday in Windsor, Ont. Asked why he wanted the talk to take place in private, Singh said he wanted to ensure the conversation is sincere.

That discussion was not expected to take place by Friday night.

Trudeau has been in damage control mode since Wednesday evening, when pictures of him in blackface were published by an American magazine.

Time Magazine first reported that Trudeau had darkened his skin with makeup and dressed in a turban with long flowing robes when he attended an Arabian Nights-themed gala in 2001 at West Point Grey Academy, a private school in Vancouver, B.C., where he used to work.

Trudeau held an emergency press conference on his campaign plane Wednesday evening. He apologized for his behaviour and admitted to another blackface incident while he was a student at at Le collège Jean-de-Brébeuf in Montreal.

On Thursday, a third instance of Trudeau wearing blackface came to light when a video surfaced showing him with his face, arms and legs painted black while wearing an afro wig.

Trudeau shed more light on that third incident earlier today. "It was a costume day for river guides in the white water rafting operation that I worked at in the summer between 1992 and 1994, roughly," he said in Toronto.

Singh said that Trudeau's efforts to rebuild his image should start with Canadians. 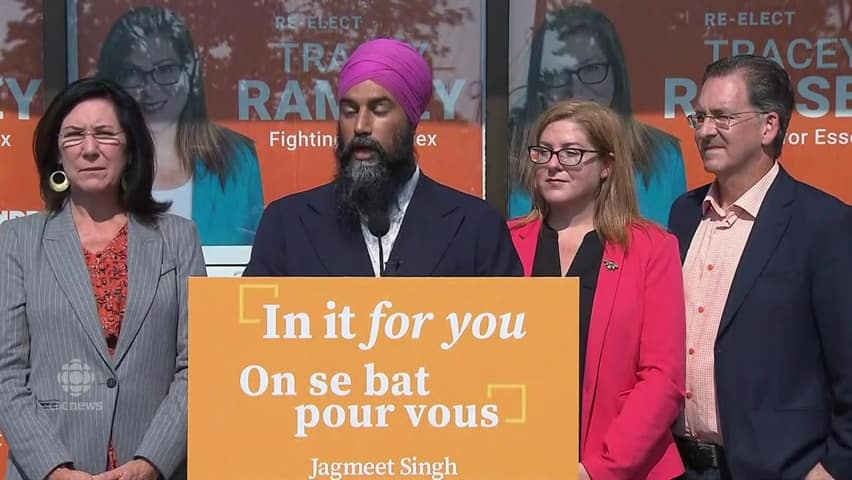 1 year ago
0:24
NDP Leader Jagmeet Singh said he's open to having a private conversation with Liberal Leader Justin Trudeau after his office reached out to him over the blackface photo scandal. Singh was taking reporters' questions in Windsor, Ont. Friday. 0:24

"There are a lot of people right now who are seeing the prime minister of this country mocking their reality, mocking their lived experience, and it's going to bring up a lot of pain for a lot of folks that's going to remind them of the insults they've heard their whole life," Singh told host Chris Hall.

"It's going to remind them of the physical violence they may have suffered, the barriers, and it's really those Canadians that need to be at the heart of anything that happens."

Trudeau said that he is onside with Singh in the NDP leader's efforts to combat Islamophobia, anti-Semitism, racism and intolerance and is looking forward to speaking with him personally.

"I will be apologizing to him personally as a racialized Canadian, as I have been apologizing to Canadians who have suffered discrimination and intolerance their entire lives in ways that some of us, like me, have never had to experience on a daily basis," Trudeau said.

Watch Singh talk to NDP supporters in Windsor about his message. 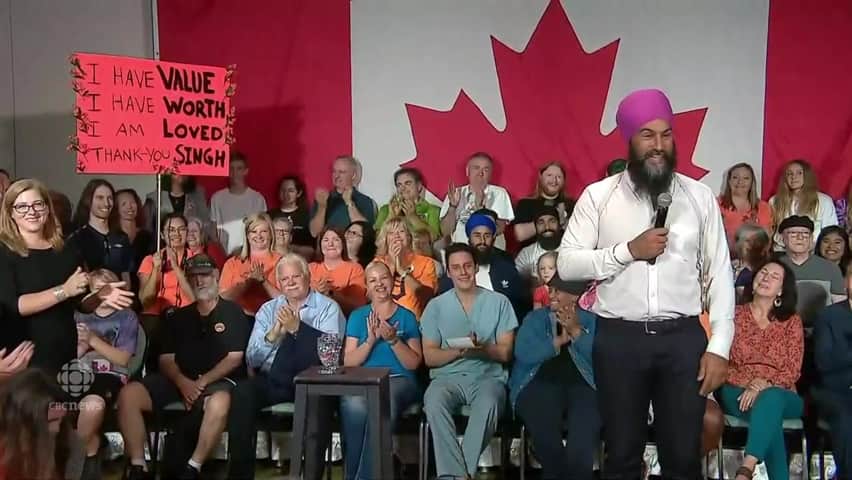 1 year ago
0:31
In response to a reporter's question, NDP Leader Jagmeet Singh acknowledges a supporter's sign at a townhall in Windsor, Ont. Friday that carries his response to the Trudeau blackface controversy. 0:31
CBC's Journalistic Standards and Practices|About CBC News