NDP Leader Jagmeet Singh says he would try to form a coalition government with other parties if the Conservatives win the most seats in the election, but fail to secure a majority.

NDP Leader Jagmeet Singh says he would try to form a coalition government with other parties if the Conservatives win the most seats in the election, but fail to secure a majority.

Asked by reporters on Sunday whether he'd work with other parties, including Justin Trudeau's Liberals, Singh replied: "Oh absolutely, because we're not going to support a Conservative government."

"We're going to fight a Conservative government, gonna fight it all the way,"  the NDP leader said at a rally with supporters in Surrey, B.C. "So we're ready to do whatever it takes." 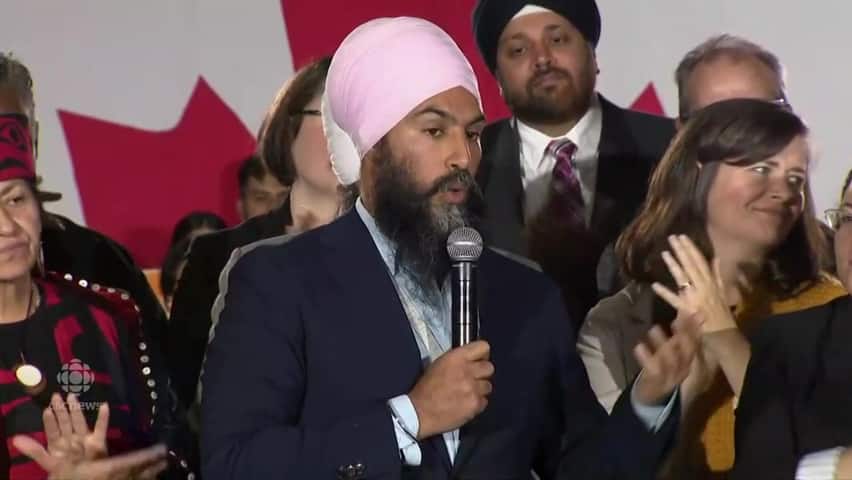 1 year ago
1:00
NDP Leader Jagmeet Singh says he will do whatever it takes to fight the Conservatives if the Tories win the most seats but fall short of a majority. 1:00

While campaigning over the Thanksgiving weekend, Singh has been asking voters to elect as many NDP candidates to Parliament as possible in an effort to push forward a progressive policies, such as universal pharmacare, dental care and environmental protections.

With just eight days remaining in the campaign, polls suggest the Conservatives and Liberals are now both below 33 per cent support nationwide — and a majority government looks unlikely. Both the New Democrats and the Bloc Québécois have momentum following the leaders' debates, while the Greens are holding their support.

Singh also urged voters to reject the "false choice" Trudeau and Liberals are presenting of a vote for Trudeau being the only way to stop a Scheer government — and called on Canadians to throw their support behind the NDP to "break the cycle."

"For me, I feel like there's this false choice being presented that if you only have to choose in an election between bad and worse, it's not really much of a choice."

In recent days, as polls suggest Scheer's Conservatives could take the most seats on Oct. 21 and support for the NDP increased, Trudeau pivoted his attacks leftward to a resurgent Singh.

Earlier Sunday, Trudeau again made his case for progressive voters to support him over the NDP, insisting "people need a progressive government, and not a progressive opposition."

"I think we've seen what happens in places like Ontario," Trudeau told reporters during an appearance at a Toronto Food Bank alongside Toronto Raptors president Masai Ujiri.

"We will continue to be honest with Canadians about the choice they're facing between Conservative cuts that would be four times greater than what Doug Ford has put forward, or continuing to move forward and invest in Canadians with a progressive government that is focused on them."

Earlier this week, Singh laid down six "urgent priorities" his party would want to see met in exchange for supporting another party in a minority Parliament scenario: