When newly-minted NDP Leader Jagmeet Singh attended the campaign kick-off for his party's candidate in the Scarborough-Agincourt byelection, he enthused that it was like coming home.

New Democrat candidate Brian Chang wound up with just 5.1 per cent of the vote Monday night

NDP Leader Jagmeet Singh isn't reading too much into his party's dismal showing in a series of recent byelections, insisting he's playing a long game as he works to shore up support across Canada in preparation for the 2019 federal election.

And he's waving off suggestions that he didn't do enough to help the NDP candidate in the east Toronto suburb of Scarborough, where Singh held a so-called "Jagmeet-and-greet" event — billed in media reports at the time as a campaign event — well outside the actual riding where Brian Chang was trying to win a seat.

"This is something that's not going to happen overnight," Singh said Wednesday after his party's weekly caucus meeting on Parliament Hill.

Liberal Jean Yip retained the Scarborough-Agincourt riding that had been held by her husband, Arnold Chan, until his untimely death from cancer in September. She captured 49.4 per cent of the vote, followed by Conservative Dasong Zou who pulled in 40.5 per cent.

Chang wound up with just 5.1 per cent, down almost three percentage points from the NDP's already poor showing in the riding during the 2015 general election. He scraped together fewer than 1,000 votes.

The NDP share of the vote similarly declined in the other three ridings where byelections were held Monday, as it did in two October byelections held about a month after Singh took the helm of the party.

The most jarring result for New Democrats was likely in Lac-Saint-Jean, a Quebec riding in which the party had finished a close second in 2015 but wound up a distant fourth in October as the Liberals stole the riding from the Conservatives. It seemed further evidence that the tide has gone out on the orange wave that swept the province in 2011 under Jack Layton.

"We've had a certain direction that the party was headed in over the past two years, and ... I (never) expected to be able to turn (things) around in just two months," Singh said. 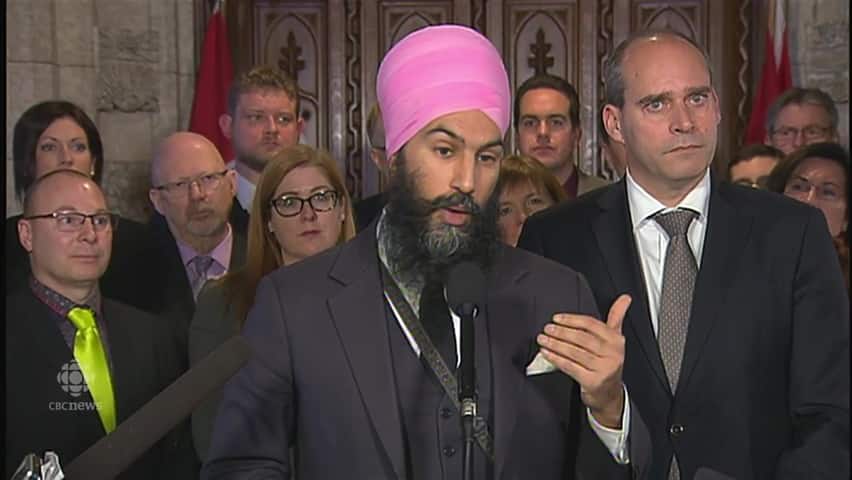 "I know it's going to take a lot of hard work, and I'm not in any way discouraged; I'm just encouraged to work even harder, and I'll continue to do that."

As for the Scarborough event, it was never meant to be billed as a byelection campaign event, said Singh — even though some media reports at the time framed it that way, and Chang was on hand as an invited guest.

Singh did not explain why the party would have planned a Scarborough event outside the riding where it knew a byelection call was imminent.

New Democrats had gambled in choosing Singh that what they might lose in Quebec — where he was an unknown and where his turban was an issue for some — they would make up in ridings in with large populations of new Canadians in Ontario and British Columbia, particularly in the suburbs around Toronto where Singh had held a seat in the provincial legislature.

NDP says they were outspent

Which is what makes the dismal showing in Scarborough-Agincourt arguably more significant.

It is precisely the kind of riding in which New Democrats had hoped Singh could make inroads: predominant immigrant population, sizable South Asian community and, as an added bonus, located in an area where the leader had grown up.

In an email blast Tuesday night seeking donations, NDP digital director Nader Mohamed had an explanation for the "hard losses" in Monday's byelections.

"We had four great candidates with incredible teams and so many dedicated volunteers — but we were outspent," he said in the email, headlined "This WON'T happen again."

Quebec New Democrat MP Matthew Dube offered another reason: the party is still making the transition to a new leader and that will take time.

"Certainly, no one was under any illusion ... even in a riding like Scarborough that it was going to happen overnight," he said, adding New Democrats will have to "look at where things could have maybe gone better."