There were shades of the infamous angry Tory at a Conservative campaign event in Brantford, Ont. Wednesday morning when a rally-goer made a profane, off-the-cuff comment to reporters. 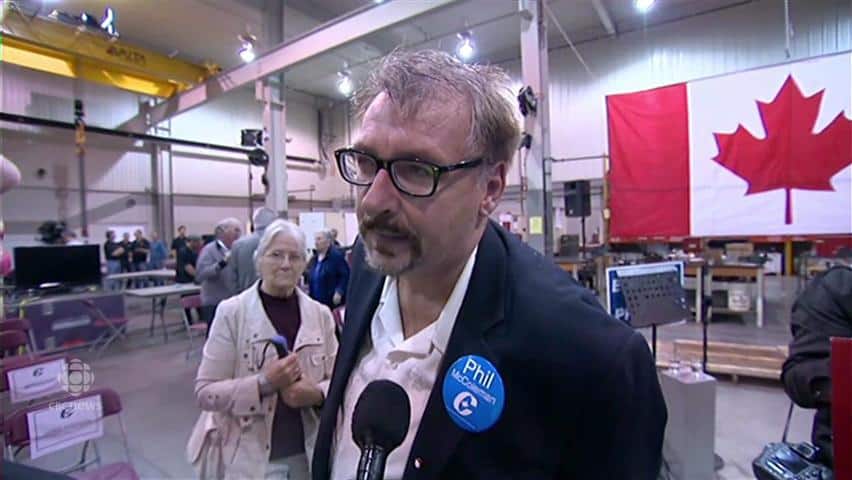 'I don't care if anybody has sex with a sheep,' Stephen Harper supporter defends role of Ford brothers in Conservative campaign

There were shades of the angry Tory at a Conservative campaign event in Brantford, Ont., Wednesday when a rally-goer made a bizarre, off-the-cuff comment to reporters.

The Conservative supporter — who identified himself as a landlord in Brantford — was being interviewed by a reporter about his thoughts on Rob and Doug Ford supporting Conservative Leader Stephen Harper. He defended the brothers, who attended a Harper rally on Tuesday, while wearing a button for local Conservative candidate Phil McColeman.

"I don't care if anybody has sex with a sheep as long as you work for the people," he said.

"My taxes are cheaper in Toronto than they are in Brantford, and I don't care what he does, as long as he reduces taxes for people of the world, of Canada."

He defended the behaviour of former Toronto mayor Rob Ford, who admitted to smoking crack cocaine in November 2013 after months of scandal.

"Sincerity should go a long way as a politician. And he went out and said it and reduced taxes at the same time and that's what people want. Lowering of taxes."

It was only a matter of time before the internet weighed in.

Unlike this particular supporter, some users did care.

Others saw parallels to Tory ads about Justin Trudeau.

Several Conservative candidates have been accusing Liberal Leader Justin Trudeau of planning to establish brothels if he becomes prime minister. The claim is also being made in a Tory ad campaign targeted at Chinese and Punjabi-speaking voters in Vancouver and Toronto.

The Liberals have made no proposals to legalize brothels, but the Conservative Party says that Trudeau voted against Bill C-36, an anti-prostitution bill that had to be amended in response to the Supreme Court of Canada ruling that it was unconstitutional.

And ewe betcha, there were plenty of sheep puns.

<a href="https://twitter.com/KatieSimpsonCTV">@KatieSimpsonCTV</a> Now I'm really concerned about politicians trying to pull the wool over our eyes...