Years after the Don Meredith sexual harassment scandal rocked the Red Chamber, some independent senators are now pushing a Senate committee to compensate his alleged victims.

Years after the Don Meredith sexual harassment scandal rocked the Red Chamber, some Independent senators are pushing a Senate committee to compensate his alleged victims.

Six former Senate employees and a parliamentary constable have alleged Meredith acted inappropriately toward them while he was serving in the upper house. The alleged behaviour included unwanted kissing and exposing his penis, along with yelling and aggressive behaviour in the office.

Meredith resigned in 2017 just before the Senate was poised to expel him from the place on another matter — his inappropriate sexual relationship with a teenage girl.

The compensation question was discussed at Thursday's meeting of the Senate's all-powerful internal economy, budgets and administration committee (CIBA) but it was "in camera," meaning the talks will be held behind closed doors. 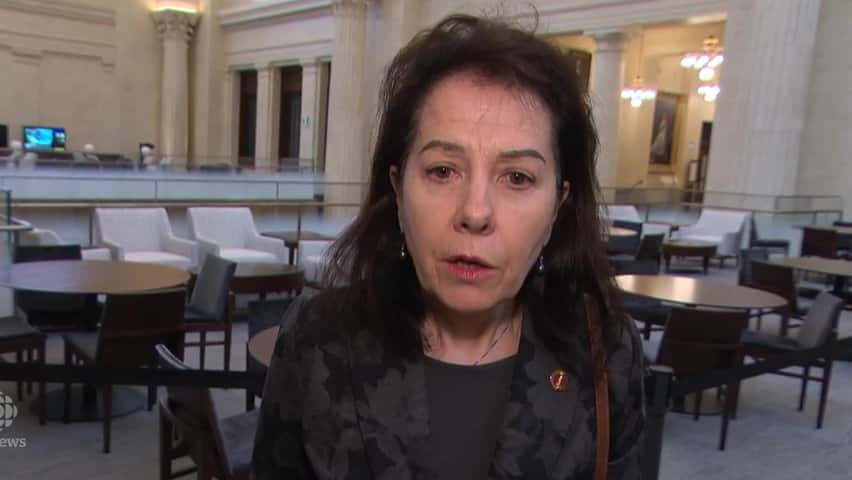 Senators: 'it's a shame' how sexual assault victims were treated

1 year agoVideo
1:30
Senators Raymonde Saint-Germain and Scott Tannas say it's a shame the way staffers were treated as the Senate Committee Internal Economy, Budgets and Administration explores whether the victims should be compensated. 1:30

The issue is contentious and the committee is split, with some members calling for the matter to be tackled publicly and others wanting discussions of a payout handled quietly by outside legal counsel.

Canadian Senators Group (CSG) Sen. Josée Verner has been lobbying colleagues on the CIBA to provide some form of financial compensation for the employees in question.

A spokesperson for Verner told CBC News Wednesday that the senator believes the victims deserve justice, which could come in part in the form of a cheque from the Senate of Canada.

"She wants CIBA and the Senate as a whole to basically not only apologize, but to really [substantively] respond to [ethics officer] Pierre Legault," François Dubois said. "There needs to be an explanation as to why everything happened as it did in Sen. Meredith's office.

"On compensation, she still thinks the victims at some point deserve some form of that."

Verner, a former minister for the status of women, is also asking the committee to allow the victims to speak at an upcoming meeting so they can relay what they endured while working for Meredith.

One of the alleged victims spoke to CBC News Wednesday. She said the Senate failed to protect its staff and the whole six-year saga has been "traumatic."

She said she first made a complaint in November 2013 — but there's still been no recognition of wrongdoing by the Senate itself. She said that because Meredith is a Pentecostal minister, many people assumed he was a "man of God" and victims had a hard time convincing others of his alleged repeated wrongdoing.

"They protected a sexual abuser and we want an apology from the Senate," she said. CBC News has agreed not to name the victim.

"How can you be one of the highest institutions in the country ... and, in your own backyard, you can't even face what's going on?"

She said that while her complaints were well-documented, she was never offered counselling assistance by the Senate. It was only after she went to the Ottawa Police to report Meredith's alleged harassment that was she was offered some professional help.

She said she's working with a lawyer to secure compensation from the upper house.

"We can't move on until this is completely done and over with it," she said. "But it's not only about the money. It's about the quality of life, emotional trauma.

"If they think we're going to let this go, it's not going to happen. The longer they wait, the worse it's going to get."

She said the entire human resources framework of the Senate needs to be overhauled to better protect staff who file harassment complaints. She said that, as it's currently constituted, the system is designed to shield senators from scandal.

She said she doesn't want any sort of payoff to be construed as accepting the current state of affairs in the Senate.

"I don't want shut-up-and-go-away money," she said. "I want systematic and long-standing change for employees of the Senate. As long as nothing is done, it leaves the door open to have other things happen. You can get away with murder."

At a recent committee meeting, Verner said the Senate must substantively respond to Legault's harassment findings to protect its reputation as an employer, and to avoid a repeat of the Meredith troubles.

She said claims of "parliamentary privilege" by current and former members of the internal economy committee stymied Legault's work in investigating the harassment claims in a timely manner.

Legault himself said he could not conduct interviews with some senators because they claimed privilege to avoid speaking with him as part of a formal inquiry.

The multi-year investigation — which included a pause while Ottawa Police investigated some of the claims — stretched on for years, much to the frustration of the victims who sought a substantive response from the Red Chamber to serious allegations of misconduct.

Verner said the Senate should study how to best balance expeditiously conducting a harassment inquiry while juggling the constitutional principle of parliamentary privilege, a form of immunity that protects legislators from certain legal processes.

For months, the Senate's subcommittee on human resources has been drafting a new anti-harassment policy. In the interim, all admissible harassment complaints are referred to an external investigator. Admissibility is assessed by an external third party, Senate spokesperson Alison Korn said.

"The Senate remains steadfast in its commitment to the prevention of harassment and in ensuring a safe and respectful work environment for everyone," Korn said. "Under the Rules of the Senate, the committee met in camera for this particular issue, as it concerns personnel matters," she said.

Korn said that, so far, none of Meredith's alleged victims have asked for compensation.

An Independent member of the internal economy committee, speaking to CBC News on background, said the best way to settle the matter is by making a payment to victims to recognize wrongdoing.

"We want the Senate to apologize," said a senator speaking on background. "The Senate needs to give the victims money."

Another Senate source with direct knowledge of the situation expressed a concern that the "deck is stacked" at the committee against the senators who are demanding public accountability and action.

"There's a lot of senators who want this issue tackled," the source said. "They do not believe the Senate can avoid this."

Meredith has been accused of twice kissing a parliamentary protective officer stationed outside the Senate chamber in Centre Block, telling her she was looking "fine" and making comments about her appearance. He allegedly suggested the constable use her handcuffs to tie him up for sexual acts.

At least one employee claims Meredith exposed his genitals in a hotel room.

The other employees told Legault that Meredith fostered a toxic work environment where they were subjected to frequent harassment, intimidation and bullying by the former senator. After an investigation, the SEO found accusations made against Meredith to be credible; he concluded all of the alleged victims were reliable witnesses.

Meredith has disputed many of the accusations.

"It is clear from the evidence that Mr. Meredith engaged in a course of conduct that was improper and offensive to the former employees that participated in this inquiry ... Taken cumulatively, they demonstrate that Mr. Meredith engaged in a pattern of behaviour that demeaned, belittled and humiliated his former employees in the workplace," Legault said in his report.