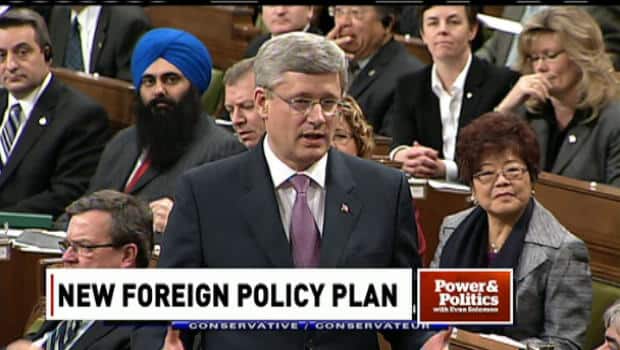 8 years ago
17:15
Opposition parties question Harper government over a confidential draft that suggests Canada develop stronger ties to emerging markets 'even where political interests or values may not align' 17:15

The document, prepared by Foreign Affairs and dated Sept. 6, is a draft of a highly classified new "Canadian foreign policy plan" the Conservative government has been preparing for more than a year.

Among other things, it warns that the Conservative government has been slow to open new markets in Asia, leaving Canada firmly tied to the troubled U.S. economy for a long time to come.

The document’s economic focus, and the lack of public consultation in drawing it up, spurred criticism from NDP Leader Tom Mulcair on Parliament Hill on Tuesday.

"Mr. Speaker, for generations Canada has been a voice for peace and democracy in the world, but the prime minister is abandoning that proud legacy," he said during question period.

Harper responded that Mulcair was citing "a document that's not government policy."

The Conservative government is concerned with "creating prosperity, and not just for Canadians here at home… and as well, promoting peace and security and our democratic values," he said.

"These are three very important pillars of our foreign policy and our government pursues them in every one of our international relationships."

The draft briefing paper takes a hard look at Canada's recent relations with fast-growing countries in Asia and South America, and states: "We need to be frank with ourselves — our influence and credibility with some of these new and emerging powers is not as strong as it needs to be and could be.

"Canada's record over past decades has been to arrive late in some key emerging markets. We cannot do so in the future."

The draft document suggests that the Conservatives may be undertaking their first foreign policy review since taking power in 2006, said Janice Stein, director of the Munk School of Global Affairs in Toronto. But it may only represent one aspect of the review, focusing on global economic strategy.

Stein believes the document was prompted "by the rapidly changing world and [the Conservatives’] majority status" after the 2011 federal election.

"It is almost exclusively a response to the changing global economy and the declining opportunities for growth in the developed world," she said in an email.

The document makes scant mention of Canada's traditional roles as peacemakers in war zones like Afghanistan, foreign aid providers in disasters such as Haiti, and everywhere represented by a highly respected diplomatic corps.

It also drops any pretense of using trade deals to pressure countries such as China on human rights and other matters of democratic principle.

Alex Neve, the Canadian secretary-general of Amnesty International, worries that elevating economic issues in any foreign policy review could have a negative impact on Canada’s record of promoting human rights abroad.

"We live in a world where we need to see countries like Canada giving greater and more concerted attention to meaningful human rights strategies right at the centre of their foreign policy agenda. And to see this draft, which suggests it’s going to be pushed way off stage left, is very worrying," he told CBC News.

When economic concerns become "the singular driving force in a country’s foreign policy, you can easily image how human rights issues become inconvenient," he said.

"You don’t want to have to be cajoling or complaining or criticizing a country with serious human rights issues if at the same time you’re trying to secure a new free trade deal or boost the level of investment agreements."

The draft document seems to suggest the Harper government wants to focus Canada's international efforts primarily on one goal: forging new trade deals and business opportunities in the rapidly expanding markets of Asia and South America.

Former Liberal foreign affairs minister Lloyd Axworthy welcomes the apparent focus on developing countries, but says that focusing too much on trade and investment could backfire.

"The most serious flaw in what was presented in this secret paper is that somehow you can expand and develop your trade relations, especially with emerging countries, solely by ministers and prime ministers off on missions," he said by phone from his office at the University of Winnipeg.

"There’s a whole portfolio of issues that are of interest to Africa and Asia and those in the Americas, and that’s something that we have really lost recently. We haven’t really been participating in the United Nations or in peacebuilding. We haven’t been involved seriously in the environmental debate."