Conservative Leader Andrew Scheer adopted a sharp tone Sunday in his final news conference of the election campaign, warning that returning more Bloc Québécois MPs will result in another referendum on independence in Quebec.

Conservative Leader Andrew Scheer adopted a sharp tone Sunday in his final news conference of the election campaign, warning that returning more Bloc Québécois MPs to Ottawa will result in another independence referendum in Quebec.

In his final pitch to millions of electors ahead of Monday's vote, Scheer said that voting Conservative is the only way to stave off a "costly coalition" between progressive parties and a revival of separatism in Quebec.

Scheer pounced on Bloc Québécois Leader Yves-Francois Blanchet's comment late Saturday night that separatism isn't an option now — with support for such a project low among Quebec voters — "but the time will come."

The Bloc leader said the "Quebec nation" should again consider sovereignty. Blanchet also quoted from past separatist leaders, like former premier René Lévesque, who extolled the virtues of an independent Quebec.

"We can once again tell our Scottish and Catalan friends that in the struggle for self-determination, Quebec is back on Monday," Blanchet said, referencing the two other sub-national regions that have considered independence.

According to the CBC's Poll Tracker, the Bloc has seen a surge in support after strong debate performances by Blanchet and is now poised to win as many as 40 seats. In the last election, the Bloc secured 19.3 per cent of the Quebec vote, which produced just 10 seats for the nationalist party.

Scheer said the Bloc leader — himself a former minister in a Parti Québécois government, the party that launched the last two independence referendums in the province — has made it clear his only purpose in Ottawa will be to advocate for separatism. He said voting Conservative will stop the Bloc's advance.

"At the 11th hour of this campaign he's admitted what we've known all along: his first priority is to work with the Parti Québécois towards a new referendum. That means a vote for the Bloc is a vote for a referendum. Another sign of the divisiveness Justin Trudeau has cultivated in our country," Scheer said.

Watch: Conservative Leader Andrew Scheer says the Bloc will immediately work with the Parti Québécois to hold a new referendum 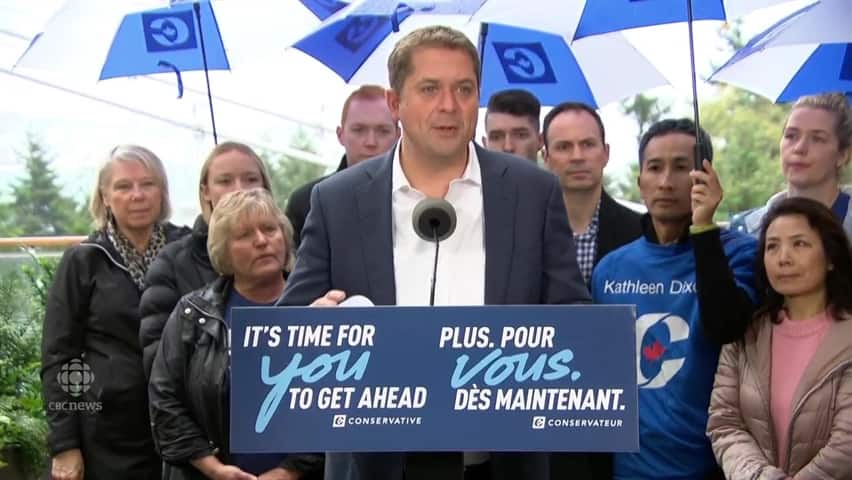 1 year ago
0:51
Conservative Leader Andrew Scheer says the Bloc Québécois will push for a referendum on Quebec's separation. 0:51

In a short stump speech in Vancouver, Trudeau also addressed Blanchet's sovereignist pitch, saying that Quebecers should vote Liberal tomorrow so as to avoid reviving debates of the past. He said the Bloc doesn't want to fight the issues of our time — climate change, and affordability — but rather wants to return to debating the place of Quebec in Canada.

"That's not what want Quebecers want ... while other people are trying to divide us, we're going to stay focused on moving forward all together," Trudeau said.

But Blanchet said Sunday that he isn't advocating for separatism now and the federalist party leaders have deliberately twisted his words, calling them "liars."

"I told my own people yesterday night that they have to understand this is not our mandate this time. I am absolutely certain that Mr. Trudeau knows it and that he is purposely lying to the Canadians," Blanchet said.

Watch: BQ Leader Yves-François Blanchet says he is not seeking a mandate this time for Quebec independence 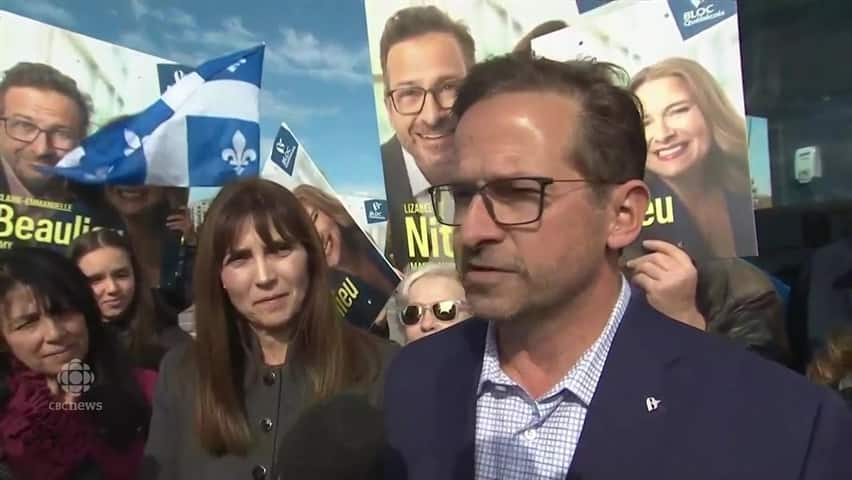 1 year ago
1:15
Bloc Québécois Leader Yves-François Blanchet says he won't be advocating for separatism in parliament. 1:15

"One day, at a time of their choice and in a matter of their own choosing, Quebecers might again consider giving themselves a country."

It is not the federal Bloc that will decide when to launch another referendum on the province's place in Canada.

As it was in 1980 and 1995, any future decision on such a referendum would be the prerogative of the provincial government of the day.

Scheer started the campaign with a plan to pick up more seats in Quebec to help secure a majority Tory government and make Trudeau a one-term prime minister. That plan seems to have faltered after a shaky showing by Scheer in the French-language debates.

Trudeau has also seen an erosion in Liberal numbers in the province. A strong result in Quebec is also central to the Liberal Party's re-election plans.

While Trudeau has refused to comment on the possibility of a coalition with the NDP in the event of a hung Parliament, Scheer said Sunday Trudeau is "leaving the door open to a coalition government" and Trudeau is prepared to "pay any price to stay in power" and "he'd use your money to do it."

"Let me be blunt, a Trudeau-led government with the NDP calling the shots would be the worst possible outcome for Canadians. It would be the coalition Canadians can't afford," Scheer said. "I've got a plan to hit the ground running ... instead of getting down to work, Trudeau will have to spend his first 100 days in backroom negotiations with the NDP so he can cling to power."

In reference to the blackface scandal, Scheer said any such arrangement would be an NDP government "wearing a Trudeau mask."

Trudeau said voting Conservative on Monday will result in billions of dollars worth of cuts to government services.

"Mr. Scheer wants to make $53 billion worth of cuts and cut up the only real plan to fight climate change that Canada has ever had," Trudeau said. "Over the next day and a half we need to work hard together to keep moving forward and to elect a progressive government."