When asked about Harper's upcoming meetings in Washington D.C., Scheer said; any time high-profile Canadians are promoting free trade it's a good thing.

Harper is expected to travel to Washington on Monday, July 2, where he is scheduled to have meetings with Larry Kudlow — the director of the National Economic Council and Trump's go-to economic adviser — and John Bolton, the president's national security adviser.

A spokesman in Scheer's office said he wasn't aware of Harper's planned meetings before media reports confirmed the trip.

Scheer has been critical of some of the government's tactics in dealing with U.S. tariffs on steel and aluminum, saying Canada should have immediately imposed its own tariffs on U.S. goods rather than waiting until a month after U.S. tariffs were imposed to have Canadian tariffs kick in.

However, Scheer said his party is committed to putting Canada before political ambitions. "While we will hold the government to account here at home... we will support their efforts to get a good deal for Canada."

From swing sets to carbon tax

The Conservatives spent much of the end of this sitting of Parliament pushing the government on issues such as trade, immigration and the national price on carbon, but also asked questions about new fixtures at the prime minister's summer residence — including a swing set.

The party drew criticism for using the swing set to accuse Prime Minister Justin Trudeau of being frivolous with taxpayers' money, but it was later discovered that Trudeau had paid for the play structure himself.

Scheer said it took the prime minister a long time to correct his assumption that it had been paid for with taxpayer dollars.

The Conservative Party has also come under fire for figures they used to attack the Liberals' carbon pricing plan.

The statistics, appearing in a tweet on Scheer's account, showed the cost of a carbon tax in each province. However, the report the Conservatives cited used estimates of $100 per tonne, when the federal plan would come in at $50 per tonne. The author of that study later tweeted that the facts used by the Conservatives misrepresented her work. 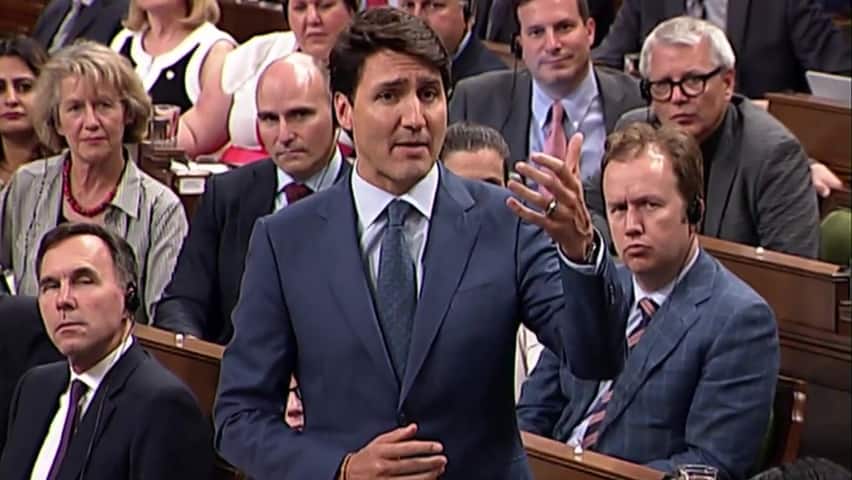 "When we put information out … we go by the facts represented," Scheer responded, adding if figures are updated or changed, the party will correct their posts.

Some provinces have stated their opposition to the current Liberal carbon pricing plan, and Scheer said Conservative premiers — such as Ontario's Doug Ford — will join in the fight against the plan.

The Conservative climate plan is coming, but Scheer refused to say exactly when. "It will come out well ahead of the next election with enough time for scrutiny and analysis," he said.

Scheer has focused on improving his party's fortunes in Quebec since becoming party leader last spring. The party saw the first fruits of that effort with a big win in the Chicoutimi-Le Fjord byelection.

Scheer told host Chris Hall he's always believed Quebecers have conservative views on many issues such as immigration and carbon pricing, but admitted his party has struggled in that province in the past, something he says is finally changing.

"For some reason, over the past few years, we have been able to click or make that connection."

Scheer said his mind is also on ridings the Conservatives lost in 2015, trying to assess what went wrong, then going back to those areas to fix the issues.