Conservative Leader Andrew Scheer carried on with his "100 Day Action Plan" campaign theme Tuesday, promising to negotiate an interprovincial trade agreement with the premiers to eliminate internal trade barriers that he said stand in the way of prosperity.

Conservative Leader Andrew Scheer carried on with his "100 Day Action Plan" campaign theme Tuesday, promising to negotiate an interprovincial trade agreement with the premiers to eliminate internal trade barriers that he said stand in the way of prosperity.

Speaking to reporters in Quebec City, Scheer promised to convene a meeting with premiers shortly after being elected to begin the process of eliminating provincial trade barriers once and for all. Many of those premiers share Scheer's broad political bent, since virtually all Liberal and NDP provincial governments have been defeated over the last four years.

He said it's unconscionable that it's easier for some Canadian businesses to trade with the U.S. and Europe than it is for them to do business in other provinces.

In an effort to present himself as a man ready to govern, Scheer has been pitching some of the things he'd do within the first 100 days if the Tories form government after Oct. 21.

With talk now turning to whether the Liberal and NDP could form a coalition if voters return a minority Parliament, Scheer said he is focused on securing a majority of seats in the House of Commons to prevent such a thing from happening. 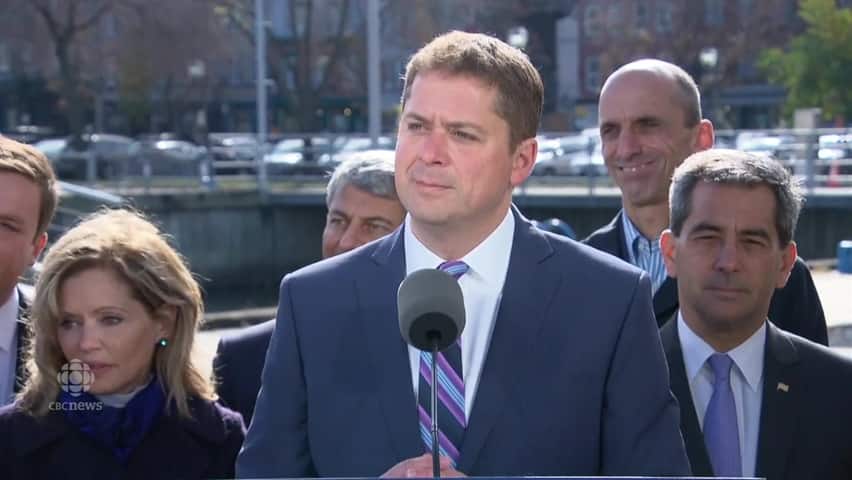 Scheer insists he will get a majority government

"My job in the next six days is to go get that majority government. That's exactly what I'm going to do," Scheer said. "I'm very optimistic. The choice is becoming more and more clear and Canadians now see that there is only one party, there is only one leader who will ensure that life becomes more affordable."

When pressed on what his party would do in the event of a minority, Scheer rejected the premise of the question. "Well, we're going to get a majority government," he said.

Beyond a promise to meet with the premiers to negotiate a trade deal, Scheer also has promised to table a fiscal update in Parliament within 45 days of the election to implement his home renovation tax credit, his public transit tax credit and credits for children's fitness and arts activities as of Jan. 1, 2020.

On Sunday, Scheer also vowed to form a committee to identify cuts to corporate welfare that could be enacted right away.

Scheer said Tuesday that Liberal Leader Justin Trudeau has failed to eliminate the many trade barriers that exist across provincial jurisdictions, barriers that are costing the Canadian economy tens of billions of dollars in lost economic activity. 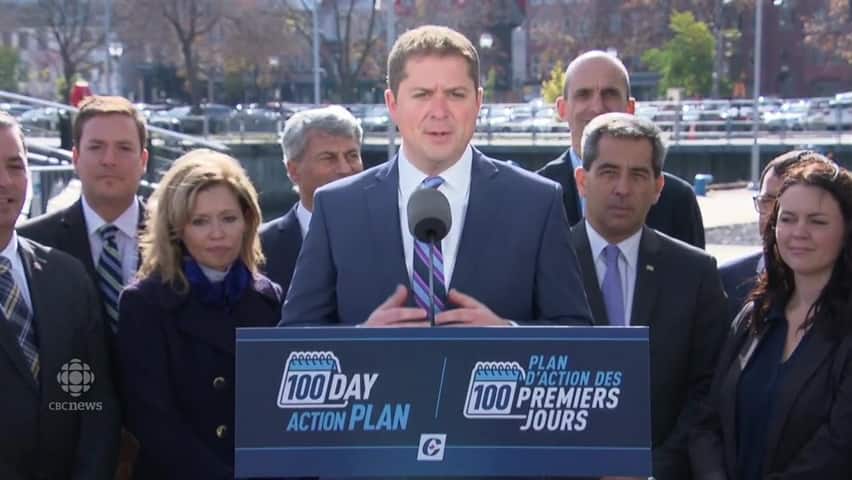 Scheer said federal-provincial relations have soured under Trudeau because the Liberal government has pushed a carbon tax on jurisdictions that have rejected a national price on fuels like oil, natural gas and propane — a price designed to drive down the country's greenhouse gas emissions. The federal price is refunded to most households in the form of a rebate at tax time.

"Trudeau's my-way-or-the-highway, Ottawa-knows-best approach is costing Canadians," Scheer said. "Only a new Conservative government will work with the provinces and territories to create the kind of economic prosperity and opportunity that will put more money in your pockets so you can get ahead."

The Canadian Free Trade Agreement, signed in 2017, has been criticized for failing to meaningfully dismantle regulatory hurdles.

Scheer said the Liberal-led initiative simply didn't go far enough, citing differing food safety standards and labour laws that require truck drivers to shift off at provincial borders to comply with jurisdiction-specific transport laws, among other quirks that he said need to be eliminated.

"There are still many hurdles, still many barriers. Those are the types of things we'll be looking to eliminate and apply standards right across the country," Scheer said.