Bill Browder, an investment firm executive and human rights activist, supports sanctions against Russia and is trying to persuade Canada to ban Russians who were involved in the torture and death of a Russian lawyer in 2009. 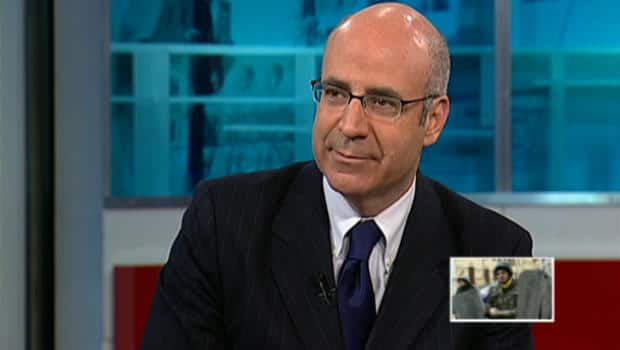 Expert on sanctions strategy against Russia

7 years agoVideo
8:05
Russian business and economy expert Bill Browder on the effect of sanctions against Russia over Ukraine tensions 8:05

Bill Browder, an investment firm executive and human rights activist, is trying to persuade Canada to ban Russians who were involved with the torture and death of a Russian lawyer in 2009.

During his current visit to Canada, he is also making the point that sanctions, which can cripple a person financially, even if issued by one country, can be extremely effective weapons, and he would like to see governments extend them not just in retaliation for the invasion of Ukraine, but for "gross abuses" of human rights.

"It hits them much more where it counts," he said in an interview, "which is in the pocketbook."

Browder, an American who was expelled from Russia in 2005 and now runs his firm Hermitage Capital Management from London, appeared before a parliamentary subcommittee on international human rights Tuesday.

Magnitsky testified against the officials involved, and was arrested and put in prison on pretrial detention in 2008. Over a year later, without ever being brought to trial, his health gradually deteriorated, and in 2009 he was found dead in his cell. He was 37 years old.

Browder told the same committee in a previous appearance in 2012, that Magnitsky had been beaten with rubber batons.

In a phone interview with CBC News Browder said anyone on a sanctions list is essentially financially ruined. They can't use a credit card or open a bank account in another country, and can't even use a credit card in their own country. There are no Russian credit cards, he explained.

"There's an expression coined by the famous [Russian] chess genius Gary Kasparov which says 'We're living in a era when we can hit them in the bank rather than in the tanks,'" he said.

If even one country such as Canada puts people on a sanctions list, no other country's banks will touch them, said Browder.

Browder himself was tried in absentia in Russia for tax evasion. Magnitsky was tried as well, the first time a dead man has been a defendant in a Russian court. "It was a show trial in every possible sense of the word," he said.

Browder said he is scheduled to meet with Immigration Minister Chris Alexander, and that he would be happy to spend a week with the department to help draw up a list of people who should be sanctioned because of their involvement with Magnitsky's torture and death which should, he said, include " a wide swathe of oligarch trustees."

The Russian oligarchs, he explained, including Russian President Vladimir Putin and government ministers, don't keep assets in their own names but entrust them to other people.

The U.S. has imposed sanctions against 18 Russian government officials involved in the Magnitsky case, while the European Parliament's list has 32 names. But Browder would like to see the list expanded to include "gross abusers of Russian human rights."

Browder said he will shortly be introducing members of the Russian feminist punk rock protest band Pussy Riot to senators in Washington. Various members of the group have spent time in prison due to their criticism of Putin.

Browder believes while Canada has imposed sanctions in response to Russian aggression in Ukraine, the government should respond similarly to domestic human rights abuses perpetrated by Russian officials.

He has been conducting an international campaign for Magnitsky's cause, and the European parliament just adopted a resolution calling on European governments to impose sanctions on Russian officials.

Browder made the same plea in Canada in 2012 but no action was taken. Now that the government has strongly condemned Vladimir Putin's regime in Russia over its aggression in Ukraine, it may be more amenable to extending its list of banned Russians.

"It's a completely different world," he told the committee. "Nobody is making nice with the Russians," adding he was "in the wilderness for four years, but now every government is interested in who I want to sanction.

Later Tuesday, Browder appeared at a news conference with Liberal MP Irwin Cotler, who has introduced a private member's bill that would put Russian human rights abusers on a sanctions list.

Cotler couldn't explain why the government wouldn't sponsor its own bill, but reminded reporters he is still in Ottawa for 18 months and won't give up on seeking justice for Magnitsky's death.

Cotler, who represents the Montreal riding of Mount Royal, has announced he won't be running in the 2015 election.