Russian sanctions against Canadians a 'badge of honour'

Foreign Affairs Minister John Baird says Russia's sanctions against 13 Canadian officials are a "badge of honour" for Prime Minister Stephen Harper and all of Canada. Russia's sanctions came as G7 leaders were preparing to meet in The Hague for an emergency meeting to discuss the situation in Ukraine. 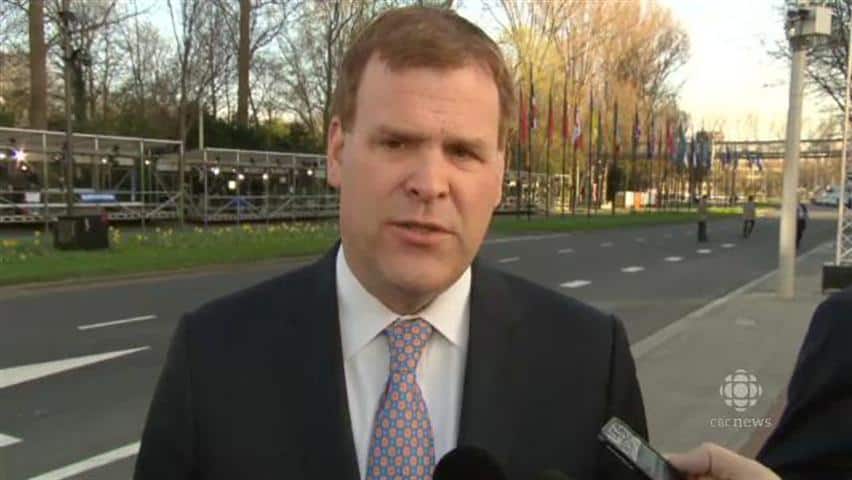 Russian President Vladimir Putin has imposed retaliatory sanctions on 13 Canadian officials including five members of the Conservative government, two Liberals and one NDP MP, banning them from entering Russia.

In a statement issued today, Russia's foreign ministry said the sanctions are being imposed "as a response to the unacceptable actions of the Canadian side."

Foreign Affairs Minister John Baird, who is in The Hague with Prime Minister Stephen Harper, said the sanctions are "a badge of honour."

"Instead of responding to calls from the international community to withdraw its troops, Russia has continued its provocative actions and this is completely unacceptable."

"Canadian officials named today by Russia aren't oligarchs, they are not people threatening to annex parts of peaceful neighbours by military force and we find this announcement deeply concerning," Baird said.​

Canada has imposed economic sanctions and travel bans on 45 Ukrainian and Russian officials, in lockstep with similar announcements made by the U.S. and other G7 allies.

Russia not expelled from G8

Russia's retaliatory sanctions came just as G7 leaders were preparing to meet in The Hague for an emergency meeting to discuss a co-ordinated response to the situation in Ukraine.

The G7 decided not to expel Russia from the G8, despite Harper hinting that Canada would support such a decision during a historic stop in Kyiv over the weekend.

In a joint declaration issued Monday, G7 leaders suspended their own participation in the G8 "until Russia changes course."

The G7 includes the U.S., Germany, Britain, Canada, France, Japan and Italy. The European Union was also invited to take part in the emergency talks.

NDP Leader Tom Mulcair, during a news conference in Ottawa on Monday, denounced Russia's military action in Crimea saying that Canada was right to stand up to Russia.

"This is the most abject breach of international law we've seen in a long time and the Russian Federation has to change its tune on this one. If not, the world community will come together and start imposing far more consequential sanctions than what's been put in to date," Mulcair said.

Here is the list of 13 Canadian officials barred from travelling to Russia.

Seeing his name on the list was a badge of honour for Cotler, who had been expelled from the Soviet Union in 1979.

"I did not stop fighting for human rights then, nor will I stop now," said the Liberal MP.

Bezan, who serves as the parliamentary secretary to the minister of national defence Rob Nicholson, also saw it that way.

Freeland, a Ukrainian-Canadian, who recently visited Kyiv also took to Twitter to say she was proud to have made the list.

Opitz, who has travelled to Ukraine with Baird, said Russia's retaliation on sanctions shows Canada has been effective in speaking with one voice.

The Conservative said MPs, who have just returned to Parliament after spending the last two weeks in their ridings, would show their solidarity with the people of Ukraine by wearing blue and yellow ribbons today — the colours of Ukraine's flag.

Dewar, the only New Democrat on the list, told reporters after question period on Monday that being barred from travelling to Russia was "minor" compared to what the people in Ukraine are going through.

He refused to call it a "badge of honour" but in a post on Twitter used those very words as a hashtag.

Senator Andreychuk, a former judge and representative at the United Nations, led Canada's 500-member mission to help monitor Ukraine's elections in 2012. She raised concerns at the time about how balloting and vote-counting was conducted.

Conservatives MPs Opitz and Bezan as well as Senator Andreychuk were part of the Canadian delegation that travelled to Ukraine with Baird last February when he visited Kyiv during the political unrest.

Other MPs such as Allison and Dewar are permanent members of the Commons committee on foreign affairs and international development.

The committee is scheduled to meet Monday afternoon to discuss the situation in Ukraine.