A former top Conservative cabinet minister — and a potential leadership candidate — says interim leader Rona Ambrose would damage her credibility if she broke her promise not to run for the permanent job.

A former top Conservative cabinet minister — and a potential leadership candidate — says interim leader Rona Ambrose would damage her credibility among her caucus colleagues if she breaks her promise not to run for the permanent job.

"I think Rona Ambrose has been very clear and she made a solemn vow prior to running for the interim leadership that she would not run for the leadership," Tony Clement said in a scrum Monday.

The former Treasury Board president — now his party's foreign affairs critic — said Ambrose was elected to shepherd the party through its rebuilding process.

"I take Rona at her word. I think that she wants to maintain her integrity and credibility and she also wants to preserve the unity of the Conservative caucus. So to me, this is a non-issue," he said. 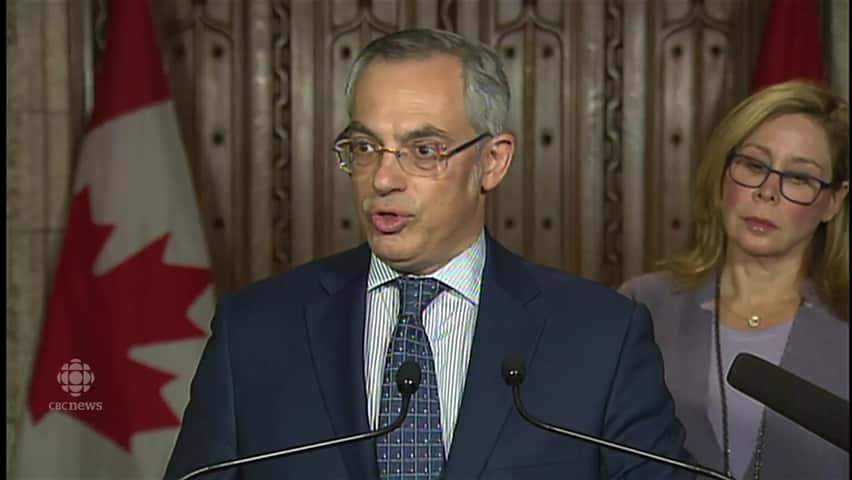 Ambrose made 'solemn vow' not to run for leadership, Clement says

5 years agoVideo
0:24
The former Treasury Board president, and now shadow Conservative critic, said Ambrose was elected to shepherd the party through its rebuilding process. 0:24

When asked about his own leadership ambitions Clement said he is at the "exploratory stage" of the process.

"Things are going well. Certainly lots of very positive feedback, but I'm certainly not in a position to make a decision before the convention," he said referring to the upcoming Conservative convention in Vancouver that will be held May 26-28.

Ambrose beat out a number other contenders for the interim leadership in November following a preferential ballot vote.

Moreover, 26 per cent of survey respondents, who are decided or leaning Conservative voters, said that they'd back Ambrose as permanent leader if she jumped into the race. That compares to just 7 per cent for Clement.

The Mainstreet/Postmedia poll was conducted April 26-27, interviewing 1,676 respondents via interactive voice response. A probabilistic sample of this size would yield a margin of error of 2.4 per cent, 19 times out of 20.

Despite the favourable polling numbers, a spokesperson for Ambrose said Monday that she has ruled out a run.

"Rona is obviously happy to be receiving support for the work she's been doing as interim leader because it shows that the team is on the right track," Mike Storeshaw said.

"But her decision on the permanent leadership was made a long time ago, and it hasn't changed and won't change. She's not going to be a candidate for it."

She would also be restricted by explicit wording in the Conservative party's constitution that bars an interim leader from running.

"A person appointed as interim leader may not be nor become a candidate in the leadership selection process," the constitution reads.

So far only two Tories have thrown their hats in the ring for the permanent job — former cabinet ministers Kellie Leitch and Maxime Bernier. The leadership election will be held on May 27, 2017.