'It's been an amazing experience': Rona Ambrose set to leave federal politics

Interim Conservative Leader Rona Ambrose is leaving federal politics and will step down from her seat when the House of Commons breaks for summer recess. Ambrose will join the Washington, D.C.-based Wilson Center's Canada Institute as a visiting Global Fellow.

Interim Conservative leader set to hand over leadership May 27 and join D.C.-based institute 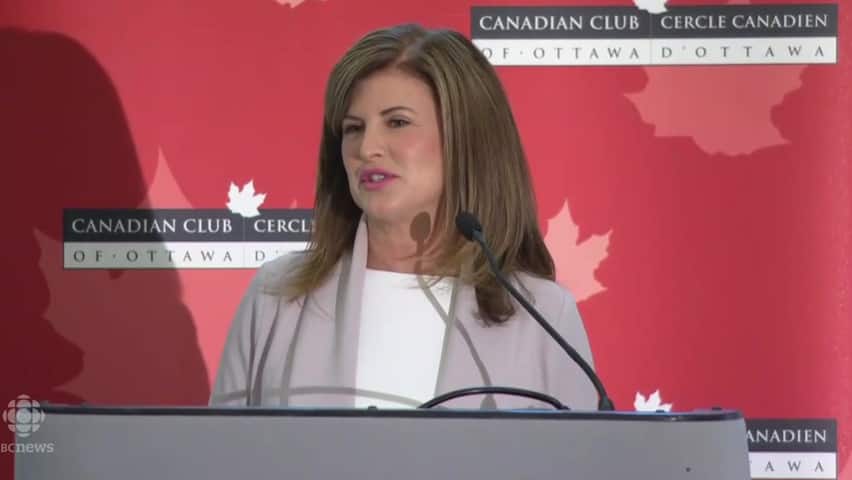 Interim Conservative Leader Rona Ambrose is leaving federal politics and will step down from her seat when the House of Commons breaks for summer recess.

The Washington-based Wilson Center announced Tuesday morning that Ambrose will join its Canada Institute as a visiting Global Fellow on Canada-U.S. trade issues. A release from the non-partisan institute said Ambrose will work out of its D.C. office.

The Edmonton MP confirmed her departure from politics during a breakfast speech Tuesday in Ottawa, where she focused on the state of the Conservative Party she will hand over to a new leader at its convention on May 27.

"I feel a little lighter this morning," she said. "It's been an amazing experience."

Ambrose informed the party of her decision on Friday. The news was first reported Monday by iPolitics.

She will resign her seat in the House of Commons after the spring sitting of Parliament ends in June.

In her morning speech, Ambrose said she was "incredibly optimistic" about her party's future, highlighting how the leadership race set a new record for membership sales over the last year as people joined to vote.

"We have clearly shown that Justin Trudeau can be beaten in 2019," she said. 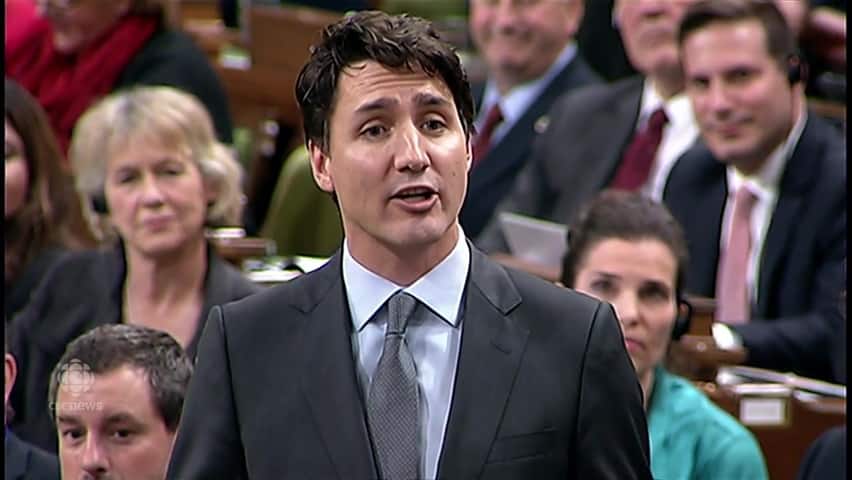 In highlighting her party's recent accomplishments, Ambrose paid particular attention to the role of strong women in her caucus.

She also paid tribute to her spouse, J.P. Veitch, for supporting her role and hosting many official events at Stornoway, the official residence of the leader of the Opposition. "We had a lot of fun," she said.

Ambrose was first elected to the House of Commons during the 2004 election, easily besting her Liberal opponent in the Edmonton-area riding.

"It was daunting, it was intimidating, but it was also exhilarating," Ambrose said after her first round in question period as a rookie MP.

"I asked our question period co-ordinator, [former Conservative MP] Jason Kenney, 'Well, what happens, this is my first day of question period practice, what happens if you ask the question, and they answer it, and they give you what you want?' And I think everyone just sort of laughed at me and said to me that doesn't usually happen."

Ambrose was immediately appointed to cabinet after former prime minister Stephen Harper secured a minority government in the 2006 campaign.

She would go on to hold eight different cabinet posts in the Harper government, including as minister of Environment, Health and Public Works, before the Conservatives were defeated in October 2015. She then set her sights on becoming the party's interim leader and beat out a number other contenders for the leadership following a preferential ballot vote.

"As prime minister, I had the privilege of appointing Rona to some of the most complex and challenging cabinet portfolios in government," Harper wrote. "Yet despite a heavy workload, Rona always retained her warm and
charming manner and down to earth Alberta humour."

"Rona has been a passionate and articulate advocate for the rights of women and girls. As minister for the Status of Women, Rona sponsored a resolution at the United Nations recognizing Oct. 11 as International Day of the Girl," Harper said. "This effort to enhance awareness of gender equality, equal access to education, health care, and protection from violence for all girls around the globe stands as a lasting testament to Rona's efforts."

A shift in leadership

Ambrose set a different tone for the party shortly after taking over from Harper, including pledging full support for an inquiry into missing and murdered Indigenous women.

"I ran into the new Justice Minister [Jody Wilson-Raybould] and I told her about my passion for ending violence against women. I told her, anything I can do to help her on the issue of missing and murdered Aboriginal women, I will be there. This is an absolutely nonpartisan issue, it should never be political," Ambrose told CBC News in an interview shortly after taking over her new post.

Ambrose also backed the removal of the long-standing same-sex marriage ban from official Tory policy ahead of the party's convention in Vancouver last year.

"The Conservative Party welcomes all conservatives, regardless of sexual orientation. If you believe in smaller government, lower taxes, balanced budgets and individual freedom, we want you in our party," Ambrose said at the time.

Conservative delegates voted to strike the definition of marriage in the party's official policy document in May.

"There's no doubt she was the right person, at the right time, for this party," Ontario Conservative MP Larry Miller said. "I am surprised to hear [she's leaving] … We were totally caught off guard. But I think Rona and J.P. want their lives back."

Before entering politics, Ambrose was a women's advocate, working with organizations to end violence against women, including the Status of Women Action Group, the Victoria Sexual Assault and Sexual Abuse Crisis Centre, and the Edmonton Women's Shelter.

To that end, Ambrose introduced a private member's bill this winter that would require anyone who wanted to be considered for a judicial appointment to undergo comprehensive training in sexual assault law.

The opposition NDP and, ultimately, the Liberal government threw their support behind Ambrose's legislation, which passed a vote at third reading Monday and now heads to the Senate.

Ambrose set out to rebuild the party after its 2015 defeat, spending time in Atlantic Canada, where the party was decimated by the Liberals.

She also sought to rebuild the party's fundraising war chest. According to financial returns filed with Elections Canada for the first quarter of 2017, the Conservative Party pulled in $5.3 million from almost 42,500 donors, compared with just $2.8 million from 31,812 donors who gave to the Liberals.

"I think Rona's got a great legacy with the party. She's maintained our party in the polls. I've really grown to like her, and I think a lot of people around the country admire the job that she did," Ontario Conservative MP Ben Lobb said.

"She's done an incredible job of being neutral in our leadership contest," Manitoba Conservative MP Ted Falk added, speaking of the race to replace Harper as permanent leader. "She's a real team leader."