Research on the mental health of Canadian Forces members and veterans will benefit from $10 million in new funding. 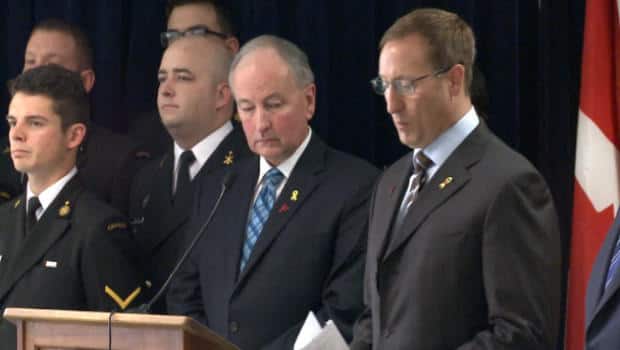 "We are going to be funding $5 million to improve the health and well-being of those who protect and selflessly serve Canadians at home and abroad," Ambrose said on Monday.

The True Patriot Love Foundation, an organization that raises funds to support veterans and their families, will invest an additional $5 million to improve research.

The funds are being directed to the Canadian Institute for Military and Veteran Health Research, which is hosting its national symposium in Toronto this week. The CIMVHR coordinates research through a network of 30 universities across Canada.

Michael Burns, the co-founder of the True Patriot Love Foundation, and Dr. Alice Aiken, director of the Canadian Institute for Military and Veteran Health Research (CIMVHR), were in Toronto for the announcement.

Monday's commitment comes one day after the federal government said it will spend $200 million over six years to address mental health issues among members of the Canadian Forces by opening an "Operational Stress Injury" clinic in Halifax along with satellite clinics in eight other cities starting next fall.

Both funding announcements come on the eve of Tuesday's report by the auditor general, which includes a chapter on whether Veterans Affairs Canada's has "facilitated timely access" to mental health services for veterans and members of the Canadian Forces.

"At the same time, we have recommendations from parliamentary committees and others who have studied veterans funding on where we can fill gaps and improve services and that's what we're responding to," he told an audience in London, Ont., where he was announcing infrastructure spending.

The Conservative government has faced criticism in recent years for its handling of veterans' benefits and cuts to the department that have led to the closure of some regional support offices. The opposition NDP last week accused the government of allowing $1.1 billion in funding for veterans to lapse and return to the treasury since 2006.

"Let me just be clear on the 'lapsed funding' issue: This is for statutory spending. There are certain programs, you know, whether they be pensions or other types of benefits, that people are entitled to by law, but governments must estimate in advance how much they think will be claimed every year," Harper said.

"What governments typically do, what we always do, what preceding governments have done, is you tend to overestimate the amount to make sure you don't fall short during the year and that's a process we will continue," he said.