Liberal Senator Roméo Dallaire says he's retiring from Canada's upper chamber. He wants to spend more time on post-traumatic stress disorder research and dealing with his own struggles with PTSD, and he is frustrated with the continuing Senate scandals. 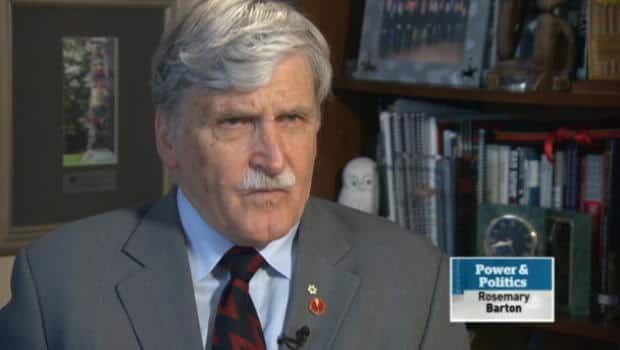 7 years ago
19:11
Liberal senator shares personal reflections about the Senate, Rwanda and his retirement from Parliament with the CBC's Evan Solomon 19:11

Senator Roméo Dallaire,  a member of the Senate Liberal caucus,  says he's retiring from the Senate.

CBC News Network's Evan Solomon reports Dallaire is retiring because of a combination of issues: His desire to spend more time on post-traumatic stress disorder research and public speaking on international causes, ongoing struggles with PTSD, and frustration with the continuing Senate scandals.

At a news conference Wednesday, Dallaire said he's been asked to spend a year at the University of Southern California studying PTSD. He's also been tasked by UN Secretary General Ban Ki-moon to visit conflict zones. As well, he's in the process of writing two more books.

"I couldn't do everything," Dallaire told a room packed with reporters. "I'm 68 years old and I have an awful lot of work ahead of me."

That work, he explained, is now mostly international. The project in Canada he will continue is his crusade for the rights of veterans, especially those with PTSD, whom he refers to as "the walking wounded."

Dallaire mentioned May 9, the national day of honour for the 160 killed in Afghanistan. "It was a fine gesture," he told reporters. "But, you know, that's not the whole story. People were dying by their own hands due to that campaign."

Not mentioning them at the ceremony is "not showing the whole breadth" of the story, he said.

Dallaire came to prominence after leading Canadian troops in Rwanda during the 1994 genocide.

His repeated warnings to the UN and to Canada went seemingly unheeded as Rwanda went through 100 days of killings.

Dallaire has also spoken publicly about his struggles since 1994 with PTSD. He has publicly revealed his four suicide attempts and battles with alcoholism, all brought on from not only what he saw in Rwanda but by the sense of futility and powerlessness he felt after trying to bring world attention to the massacre.

In his book Shake Hands with the Devil, Dallaire tells a horrific story of having to walk over a bridge held aloft by bloated human bodies.

"On the far bank, soldiers were trying to pry them loose for fear that their weight would pull the bridge apart ... My stomach heaved and I struggled for composure. I couldn't bear the movement of the bridge, up and down on the slaughtered hundreds," he wrote.

Prominently displayed on his personal website are the words he wrote to describe the effect of the Rwanda experience on his psyche:

“Rwanda will never ever leave me. It’s in the pores of my body. My soul is in those hills, my spirit is with the spirits of all those people who were slaughtered and killed.”

Just before Christmas he fell asleep at the wheel of his car on Parliament Hill, jumping a curb and hitting a lamppost. Unhurt, he later explained to the Senate that he was unable to sleep as the 20th anniversary of the Rwanda crisis drew near.

At the time, he also said the suicides of three Canadian soldiers were reviving memories of his own hopelessness and despair after he left Rwanda.

At his news conference he said, "I live every day what I lived 20 years ago, and it's as if it were this morning." He noted he takes nine pills a day and is in his 14th year of therapy.

'I can't believe I work here'

Dallaire was named to the Senate by Paul Martin in 2005. He wasn't set to retire until 2021. He grew up in the east end of Montreal, he told reporters, in a district that had seven oil refineries. "We never saw the leaves on the trees", he said as he related the outsides of the houses were made of asbestos.

Coming to Ottawa to work in the Centre Block of Parliament, which houses the Senate, was something he's never gotten over. "I can't believe I work here."

During his time in the Senate, he worked on his Romeo Dallaire Child Soldier Initiative, as well as being a voice for veterans. He is also an inspiring public speaker in huge demand, and his workload was becoming intolerable, he said.

He told Solomon he will retire on June 17, a significant date, he explained, as it is the day he learned the French intended to send in a force to stop the genocide in Rwanda.

Dallaire spoke up for Pamela Wallin

Dallaire told Solomon the process whereby senators voted to suspend three of their colleagues without pay because of inappropriate expense claims bothered him, especially in the case of Senator Pamela Wallin, who chaired the Senate defence committee, while he was deputy chair.

"I mean, it was like a charge sheet, right? Oh and on the charge sheet we already got your sentence. It was an erroneous methodology

"I fought for Pamela because I felt she was going through a process that was unfair. And I still believe how that was done was unfair," he said.

"There's only a few of us who spoke up to defend her in particular," he added.

Conservative Senator Hugh Segal is the only other senator who has publicly gone to bat for Wallin.

When Solomon asked if he would say the same about about senators Mike Duffy and Patrick Brazeau, who were also suspended without pay, Dallaire replied, "I really didn't pursue very deeply those two files. They were coming from different angles, different dimensions.

"I don't think they were treated any more fairly."